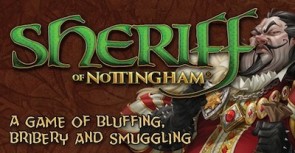 Sheriff of Nottingham is very popular and will likely blow up after Wil Wheaton puts it on his show. People love it. It’s on trend with other low-complexity, socially interactive games like Coup, The Resistance and Love Letter. But I just don’t really care for it. It’s a decent game, but it completely depends on who you are playing it with to work. Everybody at the table as got to buy into the concept and setting or it just kind of fumbles. There’s actually a little too much game with some majorities scoring and card-counting going on, it really just makes me want to play Intrigue or Cash & Guns  instead. I dunno, it’s not a bad game, I would never say that, but it is one that is very fragile and not really something I care to play much. My semi-casual  friends that I played with aggressively hated it. My usual gang would have rather played Cosmic, Intrigue or one of our other favorites in the genre.  Here’s the review. Bottom line- if you have a group, friends or family that will totally get into the setting and social narrative of the game, it is more recommended than if you don’t.

But they did like Imperial Settlers, and I did too. It’s definitely way more accessible than The New Era, and as far as tableau builders go I think it’s one of the easier to grasp ones.  Not sure if I like it or Deus better, but I would probably steer toward IS because it plays so quickly and smoothly. I really like how tightly screwed down the development curve is, the game MOVES. It’s neat too that you feel like you have a lot of options but as it goes on those options start to slough off.

Star Wars: Empire vs. Rebellion is good. Hard to beat for under $10 street. I sort of forgot that I liked that old Cold War: CIA vs. KGB game, I like it better with a SW theme. Love the small box, love the small price. FFG, more like this please.

I also got in a round of Wiz-War with Bestial Forces. Really like the new stuff, but it is as Thrower said- it kind of wants you to NOT do the all-in spell decks. We played with just the Bestial Forces schools and it worked great, lots of summons/totems going off. Trading off movement points to move creatures works well and I like that there’s a life sacrifice to bring them on the board. Relics were fun. By and large, I think Wiz-War is definitely the Cosmic/Talisman camp as the GOOD Fantasy Flight reprints where they’ve actually made respectful improvements to the games. Love the Boggart, what a great idea to have a monster that can grab a treasure for you. The totems are great, what a fun idea.

I’m kind of thinking I may play with the three schools/cantrips deck next time too, using one school from each set so far. I was all gung-ho about the big deck, but it can lead to some really crap games.

I’ve got a copy of Fantastiqa coming. It looks really neat, I like that it’s fairy tale fantasy. Requested a review copy of Xia but I haven’t heard back.

GOTY ’14 is coming…wanna place bets? I will say this- unlike last year, there is one clear victor this year. It’s a game I played and thought almost immediately that there wouldn’t be anything that could touch it for the prize. The shortlist is really about set. The four others probably aren’t too hard to suss out, but one of them is a game that you might not expect, if only because it’s pretty low profile.

I wanted to see what all the fuss was about Five Nights at Freddy’s. It’s basically a game made by someone who actually wanted to make a Stone Angels game based on Night Trap. It’s actually pretty clever, but the amount of “playing” you do in it is pretty limited. It did just about make me throw the phone the first time I got caught by that bear.

Got Guardians of the Galaxy, watched it four times since Tuesday. Yes, it’s pretty great as everyone in the world knows. Great characters, great music, great comedy, etc. What more is there to say about it, really…it’s a film that makes Yondu a major player in a multibillion dollar franchise. Yondu.

But here’s the reason that this film is not, as some have suggested, “this generation’s Star Wars”. For as great as it is, it has something that it shouldn’t and it doesn’t have something that it should. What it shouldn’t have is a sense of overconfidence. The movie KNOWS it’s great, it KNOWS its funny, and it KNOWS that it’s a massive hit. What it should have (but can’t) is that sense of the film being a last chance, all-or-nothing risk.  With Star Wars, part of its magic is that it was an underdog picture that was widely tipped to fail. Lucas and company had one shot at it. There was never a guarantee that there would ever be another Star Wars movie.  Sure, some folks were saying that GOTG could be Marvel’s first MCU flop, but there was always going to be a GotG 2, even if only to recoup losses.  And if it hit, then it would be franchised alongside Avengers and Marvel’s other hugely successful properties. It just does not have that sense that the movie is trying to prove something to the audience.

But it’s still pretty great. I don’t think I’ve laughed as much at a recent film as when Rocket and Groot try to catch Peter with a giant sack. What an awesome scene that was. And I didn’t know the Nova Corps would be so much in the film. Or Howard the Duck. WTF!

On a more serious note, The Babadook. If you have any interest in sophisticated, adult horror, you must see this film. It is the best new horror movie I have seen in maybe 20 or 30 years. It is directed by a woman and has a very distinct feminine perspective- very rare in the genre. There is a monster, but what it represents is far more terrifying than it is. The movie isn’t about jump scares, gore or silly supernatural BS- this is not The Conjuring, Paranormal Activity or any of that cornball shit. It’s a film about a couple of very dark, very human things. On one level, it is about these kind of dark, unspeakable things that all parents have to deal with. Whether it’s imagining your child injured or even dead, getting to that point where they ALMOST push you over the edge with their lack of reason or logic, or saying something that you don’t mean to that hurts them…this film touches on those things at a very intimate and empathetic level. It is also about how children cause some parts of who you were before them to disintegrate- and how that can cause a kind of latent sort of resentment.

But it is also about unresolved grief and loneliness, and how those things can creep around the fringes of your day to day life until you let them in.

I don’t want to give away much, it’s one of those that you really need to see to see what makes it great. The performances of Essie Davis (the mom) and the kid in it are absolutely top notch and I would not be surprised to see one or both of them nominated for an Academy Award. The kid in it has a VERY challenging role and he aces it. It’s challenging because he’s playing a kid that you aren’t supposed to like very much. He’s a difficult child with obvious (and sometimes abrasive) problems.

Such a great film, the best thing I’ve seen in a while. I would say that it is at least somewhere within range of classics like The Haunting and Rosemary’s Baby, and fans of films like those will likely get a lot out of this one. Fans of Hostel, the works of Rob Zombie and Saw should probably look elsewhere.

Bad Religion’s Christmas album is actually pretty decent. The kids like it too, a nice change up from the endless requests for Burl Ives.

Discuss this article
Log in to comment
Posts in discussion: Barnestorming- Sheriff of Nottingham in Review, Bestial Forces, GotG, The Babadook