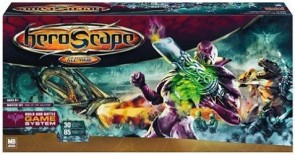 We paid the bills at Nohighscores.com, so it's time to talk Heroscape after my successful Q42014 mission to suddenly have a big collection of it. We are still playing and enjoying the crap out of Pete’s old stuff. There’s almost always a setup on the living room floor until mom says “put that shit up”.

Haven’t played much the past week other than Eldritch Horror. Man, that game is GOOD. It made me care about Cthulhu again, at least somewhat. I do think that there is definitely a stronger sense that what cards come up/are available/in what order has an impact on whether or not the game is even possible to beat than in Arkham Horror, but I’ve kind of not minded- particularly solo, where I can say “OK, I’m fucked” and put it up four turns early. There are some really brutal fail states on some of the Mythos cards- removing completed mysteries, trashing every clue token on the board, putting EVERY GATE on the board at once.

I think Forsaken Lore is a must, if only because it bulks up every deck and gives the game more range. Mountains of Madness, I’m not so sure about. I’m rarely going out to the other board, it seems like there’s always some reason to NOT go. But then again, more investigators, more cards, more of the game to mess around with.

A couple of things I REALLY REALLY love- the statuses, I love how they create a sense of uncertainty and drama…maybe it was OK to take that dark pact…or maybe you will be DEVOURED. I love how you can create a story about how you got that back injury in San Franscisco I love how the spells have additional affects AFTER casting rather than just a pass/fail thing. But most of all, I love this whole thing where KO’d/insane investigators stay on the board and you can go see them/get their stuff. That’s almost a Dark Souls-like concept, and it creates a much better narrative than “your guy dies, pick a new one”.

All in all, I think it’s one of the best games FFG has done in quite a while…which is ironic, since it’s pretty much just a redevelopment of a redevelopment.

Trying to source a copy of Super Fantasy…none ANYWHERE. I think it’s the only game I want right now. Other than the upcoming D&DAS title of course.

So now we have several Skylanders that are starting to get up into their higher power unlocks. Wow, that’s when the differences between the characters start to really come out, especially when you have to choose one of two upgrade paths. Right now, I’m totally into Star Strike, who calls down these stars and then uses these fans to smack them at the bad guys. Shit gets NUCLEAR. I didn’t like Pop Thorn at first, but then I realized that he’s actually one of the more Star Control-like characters, shooting out homing spikes everywhere- he’s like this floating gunship if you play with him right. Thumpback (“hail to the whale!”) has become my favorite giant with his chomping attack, bellyflop and anchor. I still haven’t found a character that I think just outright sucks. Whirlwind is close, but I think she’ll improve with some new powers.

I can’t believe how much mileage I’ve gotten out of these games ASIDE from playing with the kids. I really think it goes back to them being much more like PS2-era mascot platformers than current AAA fare. There’s an appealing simplicity to the hack and slash/exploration based gameplay- upgrading is fun, playing all of the side missions (like survival modes, time trials and what not) is actually fun. The story is totally cartoon fare, and it’s cute without being obnoxious. As an adult player, I thought it was too easy at first even on hard, but now the game is starting to kick my ass pretty regularly and I’m interested to see how tough “Nightmare” gets. Especially in those survival modes. That said, it makes a HUGE difference to have those leveled up characters, and now the worry is that I’m going to hit a point where some characters just completely dominate. Of course, I’m trying to balance out how much each figure gets played with across 45+ figures now, so there’s not just a totally OP one that become a crutch.

If you have the Sky Diamond magic item, it’s almost too easy to make money. The training area in the little hub town produces like $4000 every time you use it. It’s way too tempting.

Did the 3DS trade. Got a hundred bucks for it. Now I have to scrape up enough to get Majora’s Mask and Monster Hunter on the same day. This is going to be a great year for 3DS- these games, new Fire Emblem, Xenoblade Chronicles (which I think I’ll like much better as a mobile title), new Rhythm Heaven.

My wife started watching House of Cards so I’ve been roped into that. I’m such a kid, it just makes me feel like I’m at the furniture store with my parents. Sure, I can see that it’s very well written, well acted, etc. but I have zero interest in it whatsoever. “Congressmen Gone Wild”, woo hoo.

Grand Budapest Hotel, meh.  It was OK, but far from great.  Much too precious for its own good. C’mon Black Barney, you’re usually first, RETORT. I did really like how it was very much about this kind of mythical sense of “Europeaness” that never really existed and I did very much like the overall concept. But it just seemed to meander along, diverting into areas that were much less interesting than that bit where Gustav is ragging on Zero’s culture without having a duke of an idea of how he was actually raised or what the culture was like. It was such a great moment that demonstrated the first world’s arrogant ignorance of the third world, really distinguishing between luxury-based cultures and survival-based cultures.

I’m not a very big Wes Anderson fan is what it comes down to. I’m the guy that thinks The Fantastic Mr. Fox is his best movie because the subject matter and his tone fit actual puppets on a diorama than actors on a diorama.

¾ of the way through Only Lovers Left Alive…so far, so good. Tom Hiddleston is a dead ringer for Andrew Eldritch in it.

You know, I’ve never really listened to much Gorilla Biscuits?  Boy,  that was a mistake. Those first two records are excellent, especially “Start Today”.  Not sure why I passed them up, you can’t listen to it all I guess.