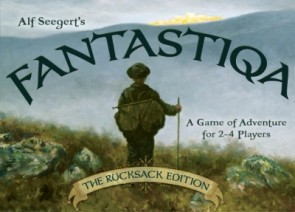 Better than The Fantasticks..

I almost traded Space Ghost Fantastiqa, but I took it out for one last spin with a friend before I closed the deal...and I realized that I didn't want to let it go because it's a very neat, very unique entry into the deckbuilding sweepstakes. I think it adds a lot to the genre without overloading it, offering a real sense of questing, travel and development to the mix. It's not an engine builder, and it never really feels like it has that kind of churn that other deckbuilders often have. And I love the setting- it's fantasy, but more in line with The Wizard of Oz than The Lord of the Rings. The art is amazing too, because it's all actual artwork and not nerded-up, tacky ass crap. Pity about how they did the expansions though- more to ship them than it is to buy them, and they're pieced out into like nine or ten purchases. Review is here.

Been playing those new Treefrog games. I tend to forget that I actually do like Martin Wallace, even though his games will forever have that "almost but not quite" feeling. That said, I really like both of them. Onward to Venus has a shameful steampunk thing going on (apparently it's based on some comics I've never heard of) but the gameplay is really fun and very different. The geography is linear, which is interesting, and you can't just blow up people's shit. There has to be a "tension" tile. There's some other cool stuff in the design like these very specific crises that happen on each planet and some fun portage rules for ferrying your dudes between planets and dropping them down to take stuff over. Mythotopia is pretty much For A Few Acres of Snow for 2-4 players sans Halifax Hammer and with a loosely (and I mean very loosely) applied fantasy draping. It's good. I've heard folks complaining about the territory names, but I freakin' love them. I haven't seen hilarious fantasy names like this on a game board since...I dunno, 1982. "I'm attacking Fadge".

Oh, by the way, I have a copy of Homeland sitting here on my desk. Is that Claire Danes on the cover? I didn't even know she was in the show. Looks cool.

Nintendo is closing Club Nintendo and they've put a ton of games up there that you can spend those coins on to download. I got several SNES games for posterity's sake along with Golden Sun (never played). I switched on Super Metroid last night and wound up playing it for two hours. Truly one of the best games ever made.

I also got Super Punch-Out!!, which I have never actually played. It's classic Punch-Out!! gameplay, so therefore it's freaking great even though Little Mac has this weird 1990s haircut and a face that looks somewhat like Jimmy Cagney. And Doc Louis is nowhere to be seen. Fighters are great as always, a bunch of slightly uncomfortable racial caricatures and grotesques. But man alive, the Jamaican fighter Bob Charlie. Obviously a play on Bob Marley, his trainer hollers out (well, it's on screen text) "Bob, it's time to shuck and jive!". WHOA. I can't believe that made it into the game20 years ago on one hand, on the other I can't believe Nintendo didn't somehow edit that out. Yikes. That just would not happen today at all, more enlightened times and all that.

Also got Earthbound, which I also never played.

Hour 30 of Dragon Quest V and I'm kind of afraid it's hit that wall that a lot of JRPGs crash into where there is a boss that is suddenly WAY more powerful than you and the game comes to a halt so you can grind for ten hours to get to where he won't one-shot half the party. I really love the game and think it's up there on par with Chrono Trigger, but this is one element of these kinds of games I really dislike. It doesn't help that you have to walk back to the boss from the save point and get hit with hard-ass encounters the whole way there.

I got the kids Book of Life, the Guillermo Del Toro-produced animated picture that virtually no one saw when it came out last year. It's really good, a vibrant latin setting and an absolutely outrageous art style that somehow crosses the Furry Freak Brothers with Mexican folk art. In some ways, it's sort in line with Rango in terms of being this really over-the-top, kind of grotesque and weird cartoon. There are some really wonderful messages about life and death in it that aren't exactly common in family films- I love that the land of the dead is this unbelievably happy, colorful place where you see all of your loved ones and it's kind of like a piñata is exploding in your face the entire time. There are some doofy pop culture references and the pacing is a little too breakneck, but overall it's a really well done, intelligent kid flick far better than all of this Rio/Madagascar/Ice Age junk.

I've been watching Attack on Titan again. It's such a strange show, I'm not really sure why it's so popular. It's really surreal and kind of gross with these naked, fleshy, steaming (!) giants eating people and grinning strangely. Then there's these kids that Spider-Man around with these grappling devices so that they can get up and slice into their spines with sort of these giant disposable razor blades. No one is ever happy in the show, everyone is anguished and there is a lot of PTSD-style staring blankly. Grim, dark and not much fun. But I really like it for some reason, maybe because the concept is just so odd.

Discuss this article
Log in to comment
Posts in discussion: Barnestorming- Fantastiqa in Review, Treefrog, Book of Life