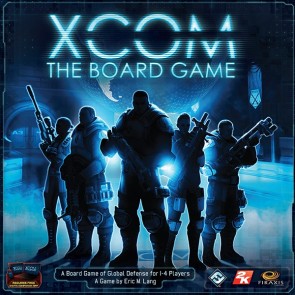 There's no wargame review on SU&SD this time. Instead I got to review a board game for a video game site: XCOM on Pocketgamer to be precise. It's an odd review because I tried to focus on the things that would be of most interest to mobile gamers: the app, and how much it resembles the XCOM video game.

The answer is that it makes great use of the technology, although not quite as much as perhaps it should, and that thematic link back to the original is pretty weak. It is, however, fast and fun. I enjoyed it, in spite of not being a co-op fan. The timed use of the app keeps on top of the alpha dog problem, and the wealth of assets and options available to each role give it plenty of strategy.

One thing I didn't mention, because it would have been lost on most PocketGamer readers, is how much it resembles Space Alert. The focus is different, because is the latter game you're challenging to communicate under pressure, whereas in XCOM you're trying to make hard decisions under pressure. But the feel is amazingly similar. To the point where, unless you're a big fan of either co-ops or XCOM, I'm not sure it's worth owning both.

Another game of note I played recently is last years' Spiel des Jahres winner Istanbul. It was mostly awful: the weakest owner of that prestigious title I've seen in some years. In spite of some judicious use of dice and lovely art, the theme and interaction are poor, the narrative and drama non-existant.

Oh sure, there's multiple ways you can set up the board and lots of different levers to pull in order to achieve victory. But it's lacking anything to engage the player to make then want to explore that diveristy. Plus, that's all par for the course for a modern Eurogame, and I see nothing here to differentiate Istanbul from an increasingly bland and identikit market.

If this derivative rubbish is the best the hobby can come up with, we're in worse shape than I realised. It highlights how important electronically boosted games like XCOM could be if they take off.

I haven't played many video games of late, aside from review material (Pike & Shot is pretty great if you can stretch to the entry price) and my regular Hearthstone questing. The competition in Hearthstone seems to have become incredibly fierce, even at low rankings. Seems like every other player is packing Ragnaros and Doctor Boom nowadays.

I did pick up Dark Souls again after an absence of several months. I'd got mired down in Blighttown, to the point of giving up. But I wanted to take another try and, with the help of a FAQ, I realised there was an area of the game that was suitable for my power level that I hadn't cleared out yet: Darkroot Basin. So I did that, took another look at Blighttown, and then wondered hard if I could motivate myself to get through it.

It's a funny game, Dark Souls. On one hand, the fifteen hours I've spent on it so far mark it as one of the three standout games of Xbox 360 (the others are Arkham Asylum and Gears of War, if you were wondering). On the other, it's absolute commitment to making things as hard as possible for the player often goes way too far.

There's no better example of this than the lack of instructions. Without understanding how the stats contrinute to play, how equipment gets upgraded and how the numbers feed into the twitch-game of combat, you're doomed. But the game does nothing to explain any of this to the player. I had to glean it all from fan forums. I can't imagine the dedication required for the trailblazers to work this all out for themselves. And for what? Just so the game can carry that "prepare to die" slogan without a hint of compromise?

And the second best example is Blighttown, where one error can lead to a dose of poison as good as instant death, or a fall off a platform which is instant death. Do I have the guts for it? Time will tell.

Not been watching much of late.

Back around the milenium, I saw Starship Troopers and thought it was amazing. The special effects were superb for the time. Plus it was both exciting and had a bit of an intellectual edge, subtly critiquing the extreme nationalism that was on the rise at the time.

I've wanted to see it again for ages, and did so a couple of weeks ago. Turns out that the me of 15 years ago had a very low critical threshold. It was awful. Although the special effects did hold up fairly well.

What bothered me most was the dumb infantry tactics. The troops are all armed with big guns, and they're fighting an enemy with no ranged capability at all. Yet in battle, they advance on the foe, closing the distance between them all the time when what they ought to be doing is precisely the opposite.

I think I need to play fewer wargames.

Amongst the wave of what, for want of a better name, I'll call "Indie Folk" that swept Europe and the US in the late 90's, two acts have turned out to be keepers for me. They are First Aid Kit and Johnny Flynn.

The latter released two of my favourite albums of the last decade, A Larum and Been Listening. His sound is an extraordinary blend of traditional instruments, modern arrangements and profound lyrics. It's strangely timeless, something you could imagine had been recorded sixty years ago in some rural backwater, rediscovered and judged way ahead of its time.

After those two, he went quiet. Then released a dull film soundtrack followed by a very mediocre third album. I couldn't help wondering what the hell happened. It transpires he's also a well-respected Shakesperean actor, and his stage and then TV career took off. Except it ended up in a late-night sitcom called Scrotal Recall.

I wish him all the best with an acting career. But I wish he'd concentrate on his music, so he could make more tracks like this.

Matt Thrower replied the topic: #198370 26 Feb 2015 15:40
Now with fixed link, so you can actually read the review! Sorry about screwing that up, and thanks to Ubarose for pointing it out.

ubarose replied the topic: #198374 26 Feb 2015 16:45
Since Space Alert is one of our self toads, I'm guessing we should take a pass on XCOM. Unless, there is something to recommend it as being better or more accessible than Space Alert.

I saw Starship Troopers when it came out, and haven't seen it since. There were some really nice effects, in service to some really stupid scenes. We're talking Michael Bay levels of stupid. I don't have a problem with Verhoeven's "Starship Troopers is Chock Full O' Fascism" take on the material; it's not a new notion by any means. But don't insult my intelligence with the way the battle scenes are depicted.

Legomancer replied the topic: #198410 27 Feb 2015 09:28
Well, at least this discussion is a welcome change from the people disliking Starship Troopers because "NO POWAR ARMOR!!!!"

Gary Sax replied the topic: #198417 27 Feb 2015 09:56
I think Starship Troopers is brilliant, over the top, satire, so I didn't mind the silly stuff. Pair it with a play through of one of the newer Call of Duty games for perfect synergy.
Read More...