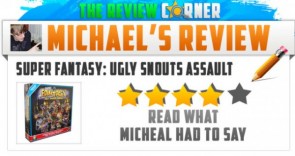 It’s over to the Review Corner @ Miniature Market this week for my review of Super Fantasy: Ugly Snouts Assault.u I tried for like a year to get a hold of a review copy of this game, actually getting in touch with the designer and the Italian publisher but nothing ever happened. Miniature Market got it in stock, so I grabbed it.

It did not disappoint- this is probably the best dungeoncrawl since D&DAS hit, it’s up there with Claustrophobia and the best of the lot. It’s really very old fashioned in a lot of ways- it’s a straight up hack-and-slash with treasures and a big boss at the end. But there are some really awesome modern touches. I love the dice pool activation mechanic and the way the cooldown timers on the powers are really smart stuff. The “nothin’ fancy” AI is touched up with scenario-specific monster behaviors and powers, but it really gets right down to it- move to heroes, hit them. I like the comic art style, I like the cardboard standups and wee little wooden barrels for you to bust. I am totally on board with this series and now I really want Night of the Badly Dead.

Playing more Imperial Assault, grumble grumble. The skirmish game has grown on me, but I still think the scenarios are garbage. They’re either REALLY gamey and kind of nonsensical  or they are just basic capture-the-flag or king-of-the-hill kinds of things. I’m also not convinced that quality is balanced with quantity…the side that takes the low-cost mob tends to win. If you have six Stormtroopers each firing six shots with a reroll each, that’s a hell of a lot more bang for your buck over a single hero that gets one shot per turn. Doesn’t matter if they have more HP.

So much of what goes on in the scenario cards you can just come up with yourself. Build a map, make it look even, and then pick 40 points of dudes for a deathmatch.

I have absolutely nothing on the review pile right now. Trying to find something out there to look at that isn’t Kickstarter, isn’t a serial purchase thing, or that I’m going to have to buy even though I don’t really want. Should be getting Evolution sometime soon though.

Had the kids playing some Dungeon! last night. River is already set to graduate to playing a Wizard, I think.

OMG, the Puzzle and Dragons Super Mario Edition demo…that is a day one purchase, no questions asked.

There will not be a better game this console generation than Bloodborne unless From Software makes one. I’ve had to put it down for a few days because I’m at a stressfully frustrating impasse, but I’m looking forward to getting to the NG+ content. I almost never play NG+.

I finally took a look at Kojima’s Silent Hills/P.T. demo since Konami is pulling it…yesterday. At first blush, it’s extraordinary and it might have been something very, very special. The environment is as realistic as anything I’ve seen in a video game and the progression of the narrative- as obscured as it is- is brilliant. There is zero instruction, zero guidance whatsoever. The player has to actually observe and experiment. The sense of dread is palpable, the feeling that everything is slightly off (maybe even moving as if on a ship?) creates a fascinatingly tense atmosphere with minimal  actual movement or action.

But I kind of think that all of that really amazing stuff gets blown once the more overt horror tropes show up. The thing in the sink…the Eraserhead baby…come on. “Lisa”, scary because of the jump scare. The fear of what MIGHT happen is way scarier than “Lisa” is. The suspended refrigerator on the other hand totally worked because it was just so WRONG.

And it’s actually kind of jarring that Kojima can’t help but broadcast his usual “YOU ARE PLAYING A VIDEO GAME” fourth wall-breaking shenanigans. Which I love, but in a game that is such a malevolent creep-out I almost don’t want that- I want the total immersion.

Who knows what this could have turned into. Could a 10-20 hour game have sustained this level of sheer artistry, detail and very granular, compartmentalized narrative? Would it have blown it all on cheap scares, fights with monsters and trophy dings popping up? Would Kojima undermine it all with goofy video game tropes that work perfectly in MGS, but not in an immersive horror game?

I’d like to think that maybe Kojima’s departure from Konami will result in him taking this game elsewhere and making it into something not tied to Silent Hill but doing his own thing. There’s a huge potential here for something really great…but it requires a venue that will let Kojima have total control with no regard for the asinine whims of the AAA corporate video games business.

I’ve also dug more into Xenoblade Chronicles, I’m now further along than I got the last two times I tried to get into it so that’s a good sign. It’s just gotten pretty interesting in terms of story, some things have been revealed about the world that were not apparent in the first 15 hours. 3DS is definitely the place to play this game.

Kirby’s Adventure 3D has gotten some play lately as well, always a delight. The 3D version is really well done and only enhances its timeless charms.

Lots of Mario Kart 8 with the new DLC. The new tracks are superlative, particularly Ribbon Road and Wild Woods.  It kind of blew my mind looking at the track selection screen, there’s like over 40 tracks and there’s maybe two that aren’t absolutely top notch.

200cc is nuts. Definitely a test of skill, much more demanding than even 150cc.

New racers are great choices. I love Isabelle and her little scooter, that thing totally rules and is on the verge of becoming my main. My kids, for some reason, won’t call her Isabelle. They call her Little Pout Pout. It’s a big deal. They talk about Little Pout Pout all the time now. They demand to run all-Little Pout Pout races.

In other household Nintendo memes, my son walks up on me about twice a day and issues a “FALCON PUNCH!”

With the news that there’s a new mini-series in the works, I got the in the mood to watch some X-Files.  Randomly chose two episodes I remembered to be among the best- “Clyde Buckman’s Final Repose” and “Darkness Falls”…and they were as good as I remembered. Both are standalones, so not mucked up in all of that messy “myth” stuff that really kind of weakened the show in the long run. It’s easy to forget how freaking good that show was at its peak. I think I might revisit “Home” and “Beyond the Sea” tonight.

I’ve been digging in the crates to listen to some old, obscure not-quite-goth, too-pop-for-post punk English guitar bands. The Sound, Sad Lovers & Giants, Modern Eon, Teardrop Explodes, the better-known Chameleons. These are largely the “second tier” acts that you would have seen opening for Echo and the Bunnymen, for example, or that weren’t really represented in the US with major releases.

Sad Lovers & Giants is particularly good, I never really paid much attention to them, as is The Sound- tragically underrated and unjustly forgotten. Bunnymen fans would do well to have a listen.

And The Chameleons, there’s no reason that band shouldn’t have been more than a cult concern. “Script of the Bridge” is just stunning. I wonder if their lame record art might have sabotaged some of their success.

In a rare instance of stumping Spotify, I noticed that they had no Comsat Angels. Wah wah…

Black Barney replied the topic: #201763 01 May 2015 14:01
Interesting write-up and perspective on Kojima. That demo really marked me and I'm super curious now what he'll do next. It's sad that we won't get that game now but at least I can sleep.

Gary Sax replied the topic: #201788 02 May 2015 10:05
Bloodborne is pretty great. I've been totally sidetracked by Helldivers, but it was a break I needed. I was plowing through Chalice Dungeons. They're still largely underwhelming, but the bosses are still quite good. I just fought the two madmen. Also, believe it or not, there are some story beats in the Chalice Dungeons which is kind of strange. I really do just need to get back into the main story instead. We'll have to have a lore discussion in the forums when we finish the game.

I'm going to try to platinum trophy the game. That tells you just how fucked up my commitment to this game is. I NEVER do shit like that.