"Looks like we got ourselves a reader...whatchoo readin' for?

Fallen is probably one of the more interesting two player games I’ve seen in a while. It’s a one-on-one storytelling dungeoncrawl that probably pulls off the “RPG-less RPG” thing better than just about anything else because it focuses on story and it has a kind of actual DM playing against the hero player.  I am not a big fan of “all against an overlord” games, but the head to head, asymmetrical format works here. It’s a pity that a bunch of game material was squandered on Kickstarter backer goals or whatever, but there’s a solid, compelling game with good replay value already in the box. Review is at No High Scores this week.

Still barging through Temple of Elemental Evil, both solo and with a couple of friends. I do have to say that there are a couple of slight disappointments. I think the scenario design isn’t nearly as good- too many “get to tile 9-12 and beat the boss” ones, fewer that use special tokens or cards to develop a unique setup. The town scenarios are really kind of dumb- fun, but dumb. The cultists aren’t really very interesting to fight and you fight them ALL THE TIME. It might be the campaign game’s fault, but it also feels really easy. Out of seven scenarios, I think we’ve used two healing surges. I still love it, and I’m really looking forward to mixing some of it up with the other titles…and figuring out how to put the campaign rules into the other games.

Evolution is, I’ve decided, really really good. Very, very well done card game that is surprisingly rich and full of actual theme (not setting). Love how each game creates a kind of unique biosphere in which you either adapt or die. Review on that next week. The Flight expansion looks really good and I’m allllllllmost thinking about backing it before the Kickstarter ends on Sunday. I’m sure it will pass once I make my saving throw against Kickstarter, for which I have like a +19 modifier.

Trying to rustle up some review copies but not getting much response lately…wanted that robot baseball game, Forge War and that Transylvania thing but nobody’s returning my calls. Will be reviewing the new T&E and Drakon over at Miniature Market in the coming weeks though. Might just buy Forbidden Stars if I can sell some things.

Not much this week, other than dabbling around with Mario Tennis again and occasionally pretending like I’m ever going to beat Xenoblade Chronicles. I like the game, but I’m like 25 hours in and there is literally no end in sight. I’ve heard upwards of 75+ hours, and I don’t know if seeing whatever happens and then the credits is going to actually be worth it.

Definitely picking up Splatoon next week. Kids should really like that one. Thought about Witcher 3, but then I realized that it’s one of those that will be under $20 in six weeks.

Hearthstone. Mostly playing an Oil Rogue deck and a Grim Patron Warrior one. I seriously have lost interest in playing pretty much any other IOS game for the time being. Right now on my phone I have this, Duck Tales and Star Wars: Rebels (which is awesome, in case you needed to be reminded).

If you are a person that has anything to do with purchasing screenplay rights, please take a look at Descender from Jeff Lemire and Dustin Nguyen. It’s three episodes in, and so far it’s really, really cool. The artwork is awesome, the story is fascinating and there are HUGE opportunities for this to be a great science fiction film. The catch is, I would want it to be hand-drawn animation. Very cool book, another great SF title from Image…a company I no longer associate with Spawn, thank god.

I also read Harrow County, a new Cullen Bunn horror book and it was quite good- I can tell he’s a southerner, and I like that approach. I forgot I had most of the Sixth Gun queued up some time ago but I didn’t get into it, so I started that too. It’s fun so far, definitely a good read if you like the whole “weird western” thing.  Maybe a touch silly and not quite as good as the best Jonah Hex books, but worth the read. Wonder if it will keep up over a long run though.

I tried Secret Wars but I just don’t care for it. Another cumbersome, bloated Marvel summer event book.  Seems marginally better than Original Sin was, at least.

Fury Road. Probably the best action film since The Matrix, and one of the defining genre films of our time. If you thought that you’d never see something on par with Aliens, The Terminator or The Road Warrior again…well, here it is. “They” don’t make them like this anymore. But George Miller does. This movie should be a stop work order for anyone writing an action or science fiction script. Tear it up and start over, but don’t expect to beat this movie. A total masterpiece that they hype is actually kind of UNDER selling.

I haven’t really listened to Siouxsie and the Banshee’s 1981 record Juju in quite some time. I’ve always regarded it as their best album- particularly since they are more of a singles act, I think. But damn, revisiting this record has made me realize that it is probably the most underrated records of the post-punk era. The band is just unbelievably good on it, the performances are meticulous and the arrangements are just stunning. John McGeoch was already worth note from his work in Magazine, but on this record he comes through with some astonishing and hugely original work. Steve Severin never recorded anything better, there’s just some tremendous bass work. And Budgie- good god, the drumming on this record. He plays LEAD drums that are often as much a part of the melody as Siouxsie’s voice, which was also never finer than on this record.

Song after song, the record just doesn’t stop delivering an intense, compelling listen. The funny thing about it now, listening to it some 25 years after I heard it for the first time, is that I recognize now that is more of a psychedelic record than a goth one. Not that those are mutually exclusive, but there’s probably more Jefferson Airplane on this record than Alice Cooper.

If you listen to only one cut, make it “Arabian Knights”. Or “Spellbound”. Or “Monitor”. Everything on there is great though.

mikecl replied the topic: #202791 21 May 2015 13:19
I'm finding the same with TOEE, but for some reason I'm tolerating its game play better than I did Ravenloft. The campaign doesn't provide much more of a story than the individual scenarios in the series other games, but traps and levelling are definite improvements. It's enjoyable enough for what it is. That dragon mini is AWESOME. Best boss mini yet I think.

Still really enjoying Fallen. Playing this one with your wife over a few glasses of wine makes for a pretty enjoyable evening. It's that perfect blend of story, game and skill ...with lots of room for table talk. I don't mind the disconnected stories, like Charlest I look at them as highlight reels of a larger dungeon explore along with the monsters sent in along the way to weaken and distract you. If I have any criticism, it's the end battles where I'm realizing a balanced hero may have an advantage over a specialized one since the nature of the tests is completely random.

Hex Sinister replied the topic: #202793 21 May 2015 13:25
I love Siouxsie up through Hyaena. After that it's all downhill. I'm really sad I didn't get to see them play with Robert but the Tinderbox show was fantastic. I saw them several years later and it was literally on my short list of most disappointing shows ever. Terrrible.

I wouldn't lose sleep about Forge War, it looks like a snore.

Michael Barnes replied the topic: #202803 21 May 2015 16:29
I saw Siouxsie and the Banshees twice, once was around 1992, but I was more concerned at that time with making out with my girlfriend. The other time was around 1995 or so, when they toured on that terrible last record they did. It was OK I guess. But Spiritualized opened, and they were awesome. I went to an HMV meet-and-greet before the show to get records signed, and of course Siouxsie never showed up.

But the WORST Siouxsie experience I had was seeing the Creatures on the Anima/Animus tour. That was a really good record, but at that point you could tell that neither Siouxsie nor Budgie wanted to be on stage. She looked kind of dumpy and miserable. He went through the motions. It was one of those shows that just feels completely boring, depressing and dreadful.

airmarkus replied the topic: #202820 22 May 2015 10:19
Barnes, I'm right there with you on Hearthstone. I don't touch anything else on my iPad anymore. I've been playing Hearthstone pretty regularly for like 8 months or something now and I don't tire of it. Sometimes ladder gets frustrating so I just play Arena and I'm getting better at it. The nice thing is I never have to spend any money on it anymore. I think I've dropped about $60 on the game over that period of time, buying 3 of the 15 card packs of Classic cards. Considering how much I play that's been a real bargain. 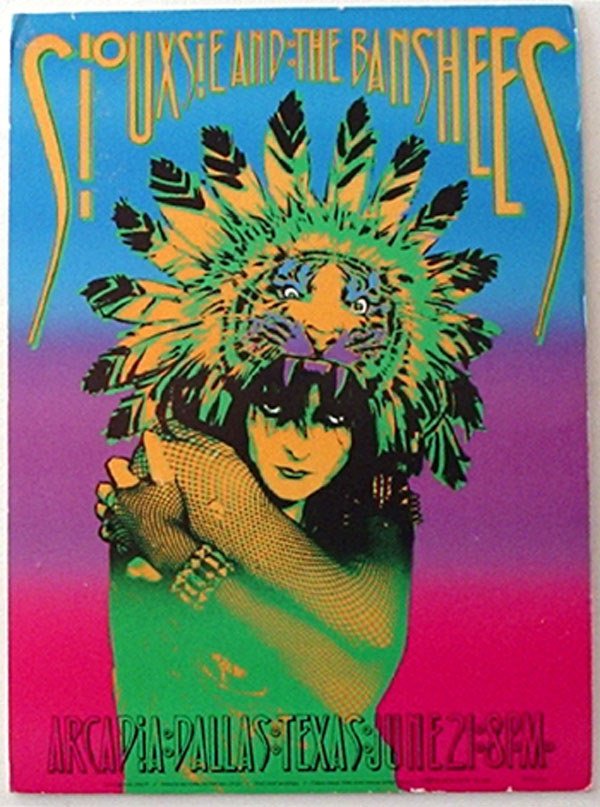 I'm ashamed to say I am not familiar with the Creatures albums. I'm not sure how they slipped through the cracks but it gives me something to dig up in the future.
Read More...