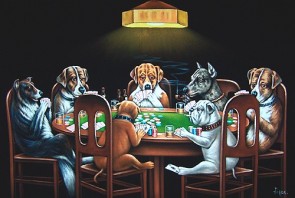 My attempt at a new gaming blog that I will be making a serious effort to keep up with monthly. This month in the doghouse we played Imperial Assault, Lords of Waterdeep, and RoboRally.

My friends; Lady, the Tramp, and Snoopy came over to the doghouse to play some games. Last time we played Star Wars: Imperial Assault, which was enjoyed by all. Since Snoopy was running late we chose that game again and were setting it up when he arrived.

This was only my second session with this game. I was actually surprised by how intuitive and fast the setup becomes once you've played. There's really not a lot of components to playing this game even if there are lot of game components in the box. In this particular campaign I'm playing as the mighty Empire and showing no mercy. The other dogs were playing the jedi apprentice (Lady), the smuggler (Snoopy), and the wookie (Tramp). I really like how the characters are clearly synonymous with the main characters from the movies, but aren't actually Luke, Han, and Chewie. For me its like getting to play a new character versus playing someone else's character. But since I'm not playing the Rebels in this campaign that's not really important yet. This session was a story mission called A New Threat. I have a secret research base and the rebels are investigating it. The map layout for this one was at least twice as large as any we'd played previously so that was a bit daunting. Here's where I let you know I will try to avoid spoilers by not getting too specific. Their goal was to access three terminals each located far apart from each other and each one requiring a different ability check. The heroes would have no idea which ability would be needed for the first two, but would know the third by process of elimination.

So we queued up the Star Wars soundtrack as usual and they started making plans for what order they'd get to stuff in because there is a round limit. They decided they were going to ignore all the crates and originally planned on splitting up, but ended up going for the first terminal together. There was a surprise waiting for them in that room when they got there. Also some stormtroopers showed up behind them and there was a shootout. This is where they learned you don't always want to stick around to kill every single bad guy due to the round limit. This led to me having a good number of enemies on the board as things progressed. As they got halfway to the second terminal they split up. It took a few rounds, but I managed to wound both Lady and the Tramp's characters. The final blow to Lady's jedi dealt by a self-destructing probe droid. Unfortunately it was at the end of the same round that she'd successfully activated the second terminal. This left just Snoopy's smuggler that I either had to wound or delay in the last round. He had already gotten past an entry point for a rather nasty baddie I was able to deploy so that didn't do me much good. I did get a final attack, but rolled badly and didn't do enough damage. Snoopy used his final action in the final round to successfully access the terminal. Rebels win. The whole mission took right about two hours. I hadn't spent any of my XP or influence after the previous mission so used the saved up stuff to buy several new cards to unleash on them next time. Oh yes, the Empire will strike back. ;)

Next, Snoopy suggested we play this. The Star Wars music was shut off and I think we listened to John Scofield the rest of the day. We've all played Waterdeep together before many times. I have the expansion stuff permanently added in as this game didn't really hit with me until we added the Corruption mechanic. I took the time to choose which cards and buildings to take out (the expansion rules have them random) so set up time is quick. It also think this matters because some Lords give bonuses based on quest type. This way you can be assured that there wasn't an inordinate number of your Lord's quest randomly removed. In fact for this game I had the Lord who gets bonuses for Commerce and Warfare quests. I lucked out and my two setup quests were each of these types. The only quest I did during the game that was a different type was a 40 point one. That put me in a large lead halfway through the game. I usually don't care how much Corruption I get early game because I know I'll have a chance to get rid of it later. Mid-game it really depends on what's out there to get rid of it and how much I already have, if any. During the last two rounds of the game I took the building that lets you remove a Corruption and add one to a spot on the board, which I placed on the only other building that would let you remove one. This was applauded by all as a completely dick move that screwed them over. One of the things I appreciate about this game is the Intrigue cards letting you attack other players directly. With people stealing resources or forcing quests on each other all game there's never any crying just promises of payback. It was a close game in the end. I got big bonus from my Lord as I focused on those quests and had no Corruption left. I ended up winning by a single point over Snoopy with Lady and the Tramp not far behind. This is less because of game mechanisms forcing it to be close and more from our experience with the game making us all good players.

I usually tell people I don't have a particular favorite board game, but if I had to name one this would be it. I'm not actually very good at and have only won a handful of times over the past couple decades. My copy of the game is sort of my own version I've pieced together from the best parts/boards in the original release, expansions, the German release, and one of the more recent releases. I once bought a used copy of Armed & Dangerous off eBay's Buy-It-Now for $30 and it wasn't even punched when I got it. We played a single board (plus starting board) with 3 flags. We were done in a little over an hour. I never reached the second flag as I kept taking a lot of damage and had to either power down or not get enough card variety. In fact three of us were basically gridlocked fighting and pushing each other while Lady snuck around and won before we fully realized it was happening. Snoopy never made it to the first flag and swore he wouldn't play that board again (Vault, if you're curious). We all had a lot of fun with all these games and parted ways after the usual post-games chatting.

Sevej replied the topic: #204698 21 Jun 2015 07:08
The longest part of IA setup is the map pieces. There's like dozens of decks, and the first time organizing them and recognizing what they do is hell. But afterwards (in exception to map setup), it's a breeze to setup.

VonTush replied the topic: #204702 21 Jun 2015 09:17
With IA this is the first time I've missed words on the backs of the decks describing what they are. But figuring out what's what came with time.

southernman replied the topic: #204703 21 Jun 2015 09:22
I have taken a dislike to IA because of the 'rounds to win' timer, I don't like having to sprint around and leave 75% of the game just so you don't run out of time - just my preferences for having fun with a game and understand many people won't give a shit about it.
It's also a similar reason to why I am losing interest in Descent 2E (after only the Base game campaign and LotW mini campaign it is probably in the sell/trade pile), the need for the Heroes to explore every search token to get gold so they can buy weapons/armour to prevent them getting slaughtered as quickly often at the expense of even competing in the quest has sucked the fun out of it too.

The more I think about the Descent system and its evolution, I'm starting to feel like the game is having more in common with older video game platformer games where you can't explore everything and there's a mad scramble against the clock ignoring enemies and things in order to just keep pressing forward towards the end goal.

ChristopherMD replied the topic: #204728 21 Jun 2015 21:09
I like the round limit precisely because it keeps the game moving. From a story perspective it keeps things focused on the plot instead of just going through the motions of reaching every single crate and clearing every single room. Then there is the tension it adds making sure you have time to complete the mission. The video game analogy is good too because it also adds replay value to missions. Doing better on a mission is akin to beating your high score.

Plus it seems kind of stupid to have the rebels mission include killing every living thing on a base.
Admiral Ackbar: "Your mission is to access the control terminal and steal these blueprints."
Character: "Yes sir, we'll be in and out before they know it."
Admiral Ackbar: "No, take your time and fight the entire garrison even though I'm only sending a four man team."
Character: "WTF?"

Hex Sinister replied the topic: #204733 22 Jun 2015 02:48
Descent 1 didn't have an actual physical timer per se. But it's still totally there in the sense that you have to keep up momentum or you're going to get swamped with forces. Same with Gears of War. I don't think a hard timer is a necessary evil, just a shortcut. I would like the mechanic more if there were things you could do to "buy more time", like in the movies. Gears actually does this with one (or two?) cards where you can catch your breath and skip enemy activations/spawns.

I've considered picking up robo-rally for the family, but the releases seem a bit all over the place. Is that recent 'AH' edition 'good enough'?

Certainly is. The movement card deck is the same in every edition. I've never used the player mats but they probably help with learning.