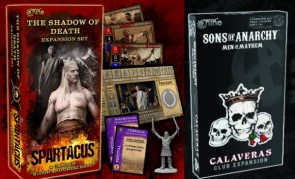 While we wait to see what Gale Force Nine has in store for us with the Black Sails, WWE and Family Guy (really?) games, they've recently dropped a couple of expansions.

Spartacus is a no-brainer if you are already a convert, because that game still rules and this one makes those wacky Primus events more common- along with adding new versions of three of the best gladiators, a new boasting mechanic and a couple of "Cock Block" cards. You betcha. The Sons of Anarchy expansion is basically just a player-add thing, and that's fine and this is a good gang. But it's also not particularly essential, especially if you're having a hard enough time getting three or four people to play SoA, let alone five or six. Review at No High Scores this week.

Really enjoying Legendary Encounters, but I tried to play it with a couple of friends last night and it just kind of flopped. I dunno, they weren't really feeling it and the general consensus was that they wished that we had played Forbidden Stars instead. C'est la Vie. But a solo game, it's really fun and the way the scenarios describe the films is actually really well done.  For example, in the Aliens scenario, it starts off with you exploring Hadley's Hope and encountering host colonists and events happen that prohibit you from attacking in certain rooms. Heading into second phase, you've got to set up sentry guns in two of the rooms, Newt shows up, and TONS of aliens start streaming out- and it really feels like fighting against a horde of them rather than in the first scenario where it does come across contextually as one alien popping up and hitting your people. In phase 3, you've got to find the queen and kill her, of course, but you can't if she has captives. And the first time I did this one, I kept getting captives taken but I thought it was kind of good since it thinned my deck of starter cards. But then when I found the queen there was so many that there was no hope of freeing them all and then killing her beore she took out two of my people. I've lost the Aliens scenario a couple of times now but I've beaten Alien three out of five times. Not sure this one needs any kind of expansion, it really feels complete out of the box unlike so many other deckbuilders.

I'm also really enjoying Victory Point Games' Darkest Night- but again, this is one that feels like it's best solo. I have the Necromancer Bundle and the From the Abyss expansion and I'm using everything. Fundamentally, it is an Arkham Horror-style adventure game with some sort of vague similarities to that, but it's really lean. There are seven locations on the board and an evil Necromancer that moves between them, dropping off "blights" where he goes. These blights are sometimes monsters, but sometimes hazards or other tidings of ill omen. You have four characters that each have a VERY unique set of ability cards. You do one thing each turn after you resolve an event card- move, attack, hide, pray, search, etc. The idea is that you have to unlock these holy relics that each require three keys. Get all four relics and go to the monastery and you win. Or, you can try to fight the Necromancer.

It's pretty standard fantasy adventure stuff on the surface, but there are some really cool things going on in the game. You don't have HP, you have grace. Whe you fight and lose, you die unless you have the grace to survive. Stealth is important, and certain things make you gain or lose stealth and effects play off of how stealthy (or not) you are in this quest.  The Necromancer also comes looking for you if you have low stealth, which is bad. It's interesting that you don't always kill monsters or other blights when you battle them. They attack/affect you at the end of your turn, but they remain until you take an action to actually attack them, which incurs a stealth loss. Lots of interesting little things like that going on in this design. I'll probably review the whole thing soon. But so far it's up there with Eldritch Horror and may in some ways be better than that great game.

I have the new edition of Drakon on tap for Miniature Market's Review Corner. I dunno, this is like the third time I've owned this game and I'm still not quite sure it's a contender at all. It's cute, kind of fun, light, etc. but it's also in the same space as DungeonQuest, which is by far the superior game. But on the flip side, I've been playing it with my kids (5 1/2 and almost 4) and they've been able to grasp it with some help such as explaining the room tiles and playing with open hands. Trying to get this out a the next group get-together with six.

We played an epic 5p game of Spartacus last night. Solonius nearly won 2 hours in, but we managed to block him and I ran away with the victory only 2 hours later with a huge Primus event featuring Spartacus and The Egyptian on one side vs Crixus and that medium-weight traitorous gladiator - I believe it might be that hung-like-a-horse Gaul. Spartacus decapitated him.

Not sure that the new expansion sounds so great to me though, it seems focused solely on Primus events and new versions of the 3 biggest gladiators.

Mr. White replied the topic: #205969 10 Jul 2015 16:22
I picked up Drakon several years back in a FFG holiday sale, played it once, then moved it on. I'm not sure why they think that games they clearance out make good candidates for a remake...

Mr. White wrote: I picked up Drakon several years back in a FFG holiday sale, played it once, then moved it on. I'm not sure why they think that games they clearance out make good candidates for a remake...

wadenels replied the topic: #205980 10 Jul 2015 16:53
FFG did a great job on the 4th edition Drakon artwork. I picked it up because I've had a hankering lately and nobody seems to own it anymore. The truth is, though, that I probably want to like Drakon more than I actually do. I'm not really sure the game pays off in repeated plays. We'll see, if I can get anyone to play the damn thing with me.

MacDirk Diggler replied the topic: #205986 10 Jul 2015 19:05
Ya, I think Barnes nailed the best use of Drakon. .. as a kid's game. If you have a bunch of hobby board gaming friends over, even if you are going strictly beer and pretzels, there are much better options in my opinion.

Alastair MacDirk wrote: Ya, I think Barnes nailed the best use of Drakon. .. as a kid's game. If you have a bunch of hobby board gaming friends over, even if you are going strictly beer and pretzels, there are much better options in my opinion.

Maybe, but if we're serious about the beer part in "beer and pretzels" you can explain Drakon in about 50 seconds. One thing I'll give it is that there's more game there than there are rules, and I like that.

Columbob replied the topic: #206309 15 Jul 2015 10:50
Ok, so I finally read the review and the new expansion actually offers more things than I thought it would initially. A 7-player game sounds nasty! As Michael states in the review: "Shadow of Death is a must-buy out of the gate for fans of Spartacus."

Shellhead replied the topic: #206312 15 Jul 2015 10:56
I bought both of these GF9 expansions on sight, though I flinched at the $20 cost for the Sons of Anarchy expansion, knowing that it was probably going to be just 10 plastic dudes, a specialty d6, and a screen. It turned out that there was also a market card for 5-6 player games plus a few optional rules, but the Calveras faction looks interesting. I keep putting off painting my Spartacus dudes, and now I have nine to paint instead of just four.

hotseatgames replied the topic: #206313 15 Jul 2015 11:02
There is really no need for 2 of the 3 minis that come in the Spartacus expansion. Especially if you do what I did, and paint each mini with a colored base matching one of the player boards.

SuperflyPete replied the topic: #206582 20 Jul 2015 12:06
I call pre-emptive strike for Darkest Night when it invariably ends up in the Barnes Needs A New Pair Of Shoes sale.

I want that mother. I've wanted it for YEARS.
Read More...