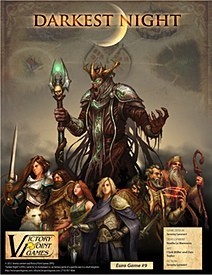 Hey look! A co-op fantasy adventure game where you flip tokens/cards and roll dice! It's like the olden days of gaming...last week. Darkest Night certainly doesn't come across like the most original game out there, but the good news is that it is actually a DAMN good example of its genre. The main thing that I think sets it apart are the something like 30 characters across the base game and all of its expansions. Each of these has a unique deck of Power cards (with some cool iconography) that cause each one to play totally different from the others. I don't know if I've ever seen a board game handle class distinctions so well. Pathfinder had some of that, but it's even more pronounced in this game.

And there's this cool stealth theme going on, which makes up for the lackluster setting. You aren't supposed to just charge in and fight the bad guys. You've got to do this kind of guerilla war/Fellowship thing.

I really like Darkest Night a lot, there's a TON of game here. But I think it's actually best for solo players, unless you want to hear endless complaining from the guy that drew the Alchemist and either can't sort out how to play him or winds up with a few too many turns where he feels like he doesn't have anything to fight or roll a die at.

Review is the Review Section.

I don't think Darkest Night is quite as good as Eldritch Horror in this particular style of game, but it's up there. I got Strange Remnants in and I've messed around with the Syzygy GOO. Both games were, weirdly, too easy. One of them I had the waitress and the new chef character because...well, I just had to. It's an odd expansion, it doesn't really add anything other than cards and it repeats some of the mechanical ideas. Now there's a Mystic Ruins deck that works just like the Expeditions. So much for Eldritch Horror being a more streamlined, accessible take on the AH concept. It's got card creep going on.

Argent is still hot with my folks, and I'm perfectly fine with that because it's one of the best things I've played in a while. We've tried the expansion, 'Mancers of the University, and at first I thought it was something to wait and see about but the additions are easy to implement and they really do a lot to enhance the setting. Which should, in a just world, be Harry Potter.

Imperial Assault stuff is coming from MM, we'll see how that goes. I understand that there's a new "mini campaign" in it, which is a step in the right direction IMO.

Charlie and I are in the middle of doing a head-to-head review on the very workmanlike Forbidden Stars, it should be a good one.

OldHippy replied the topic: #208922 20 Aug 2015 21:28
I lost all interest in Forbidden Stars very quickly. But I have to admit that you've got me wondering about Argent. I've been trying to find a modern heavy Euro-ish game to buy into. I toyed with the idea of getting Caverna and Terra Mystica but everything I read turned me off big time. At this moment it's 504 that I'm thinking about the most and I didn't think anything could change that... but when you write about Argent I do consider plunging into that instead. Everything about it sounds very appealing to me.

The Village is a great MEDIUM EURO-ISH game. Really enjoying it, and I love the stolen idea of killing people off when time rolls on. It's really very deep. It's also very fun, which is odd for a game like this.

Caverna is better than Agricola only in that there's more things you can do, so it's sort of like an Agricola where you rarely get blocked for your action. Not a huge fan, but it's a good game. I think it's the kind of game where you are in the Ag camp or the Ca camp (see what I did there, lab man?).

Terra Mystica is fucking horrible. It's a messy design and it's really kind of tedious. That's after one play, so maybe I'm wrong, but I wouldn't play it again.

I'm looking at Argent with disdain, because I'm pretty sure I'd love it, and I don't want to spend any money.

airmarkus replied the topic: #208946 21 Aug 2015 10:44
After all the forum discussion on Argent this week I went ahead and ordered it and the expansion from Coolstuff. Now I just have to make my way over there and pick it up.

I played Eldritch Horror at the Dice Tower con this year with 6 players. Never again! That being said, I thought the game was pretty cool, just way too long with that many players and boredom set in. I think it would be great solo or up to 3 players, possibly 4. I may pick it up sometime in the near future, or possibly Relic instead.

Forbidden Stars sounds like the kind of game that I really dig, considering Twilight Imperium and Runewars are among my favorites. I can't wait to read that one.

Josh Look replied the topic: #208952 21 Aug 2015 11:45
Yeah, Forbidden Stars is awesome. It'll likely be my GOTY 2015, not that anyone gives two shits about my list. The only big conflict game by FFG that tops it is TI3. Runewars, Starcraft, AGOT are squarely behind it.

waddball replied the topic: #208956 21 Aug 2015 12:40
I can't agree with the "card creep" observation in Eldritch. FFG has done a great job keeping things modular. You only use the Mystic Ruins deck if you're using Syzygy or one Prelude. Mechanically, it works the same as Expeditions, so no new rules there, which is really nice. They could add a Forsaken Remnants or Strange Lore stack later, and it wouldn't add sprawl (except in the box) because you would never use all three options at the same time.

I'm not sure I would want it to remain perfectly static, anyway. They're doling out new mechanisms slowly (Mystic Ruins isn't really a new mechanism, but Adventures are, and I suppose the sideboard movement options, but all pretty simple stuff). I guess you can call that creep, but it isn't like the old Arkham mess. The most you would ever have in play are two optional modules, depending on the GOO and Prelude. That could lead to a rare situation where two sideboards are in play (once Under the Pyramids comes out), but that's the max sprawl possible. Contrast that with Arkham. I don't feel any sense of dread opening the EH box and getting a game started up.

charlest replied the topic: #208958 21 Aug 2015 12:43
I don't know yet if Forbidden Stars is better than StarCraft. In some ways definitely, in others not really. It's kind of a toss up. It is MUCH cleaner than SC for sure though.

My biggest complaint is that I think with 3-4 players it's actually longer for us than StarCraft.

Michael Barnes replied the topic: #208975 21 Aug 2015 15:22
That is true, Waddball...and the times I've played with Strange Remnants have all been with Syzygy AND the Cosmic Alignment thing. So the full deal. But I still think the game is toeing that line, threatening to start getting into those irritating counters and such you only use once in every ten games and only if certain elements are in play.

The problem I have with Adventures and the Ruins are that they are really just more ways to push the mysteries along...I'm not sure they really add any depth or additional narrative, really they just give you more options if you can't do what the mystery requires for whatever reason.

waddball replied the topic: #209154 24 Aug 2015 12:36
Michael, I see your point. I'm reassured, though, that so far they've introduced at most one "new" thing in each expansion, and everything so far has been simple. Using Eldritch tokens as a stand-in for any number of specific effects is great, so for token bloat we've really only got Adventure and Ruins, both just one new token on the board and only used under certain circumstances. But yeah, add another, and another...it's a potential worry.

I think Adventures definitely contribute to the narrative (especially in Mountains of Madness; I'm leery of the more "on rails" stack in Strange Remnants), but I doubt they add much depth. Still, this is an adventure game front and center, and it's pretty minimal mechanical fuss when I compare it to basically anything in the Arkham expansions.
Read More...