Barnes on Games- Yashima: Legend of the Kami Masters in Review, Mistfall, Xia 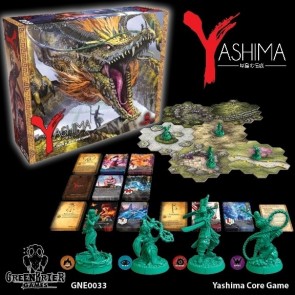 In which Yie Ar Kung Fu is referenced.

Yashima: Legend of the Kami Masters might be a really good fighting game. There's some really cool concepts going on, and it comes across like a very neat and very focused martial arts-style battle with magic. The magic is a really neat (but somewhat narratively dissonant) system where you have a deck of Tome cards, and you flip through them as you would if they were a book. You can only cast spells from the pages you can see. The miniatures look great, the cardplay is multilayered and nuanced, and it's quick and easy to play.

But it may be too focused. All there is in terms of objectives is "beat up the other guys". No scenarios, no varying game modes. There are elements such as terrain effects and facing, but they seem almost negligible. I'm left thinking that Yashima's rules- which are really just about two pages- would almost serve better in a game with a larger scope than ass-kicking.

Regardless, it's a good game and I'd like to see where the designers take it. Review is in the Review Section.

I've been playing a lot of Mistfall. Man, is this game under my skin. I think there is definitely a good game here, pitched somewhere between Pathfinder and LOTR LCG, but it has one of the most useless rulebooks in recent memory. And then there are numerous errata, including card text. The FAQ seems to grow daily. And it has a TON of indecipherable Euroglyphics.

But the gameplay is quite compelling, and quite challenging. Like Pathfinder, it kind of has that thing going on where you manage a fairly small deck and you use abilities and advantages to manipulate your available cards and cards in deck so that you are usually/always equipped with gear and combat/defense cards. It has a very smart system where you earn "Focus" for taking certain actions or making attacks, and it sort of indicates how much enemy attention you are drawing. At certain break points, your focus winds up causing the enemies to call for reinforcements or become enraged. So you kind of have to pace yourself or you'll get in trouble during battle.

It's definitely a "wait for second edition" kind of thing, I'm afraid, but what is here is already very good. I haven't played it with anyone yet, strictly solo, but I'm scared. I think teaching this game is going to be a disaster.

Played Xia again with a couple of friends Sunday night...had a really funny turn of events. I wound up out of energy and stranded after desparately blind-jumping in hopes of finding a planet and winding up in void space (a tile with NOTHING on it). So my friend Jamie says "I'll come help you out" because you get Fame Points for rescuing stranded players. So I think "OK, cool". So he sidles up beside me, gives me the energy and gets his point, and then reveals that he has a Thief mission targeting me. So he rolls on the table and gets the maximum haul- and a bounty, which makes him an outlaw. So he tools off and the next planet explored is the one that puts the Enforcer NPC ship in play. The cops. So the next several turns, he's on the run from the Enforcer while frantically searching for the system tile where he needs to drop off his stolen goods. Finally, THE LAST TILE turns out to be his destination. But during all of this time, I was moving back toward him, using a gate, and I got into position to blast him with missiles that I bought. He had some damage already on his ship, I rolled, and destroyed him before he could pull into station and before the cops caught up with him. Fun stuff.

It's an odd game because despite appearances, it is really kind of frivolous in a very family game in a way...yet it has more detail and more wonky detail. Like, you can upgrade ships and put on all of these components...but there's really not that many options. And it's very roll-and-move...and press-your-luck- mechanics not favored by "hardcore" gamers. But I think this is why I like it, it's almost kind of "dumb fun" in a way, it's not heavy at all.

Discuss this article
Log in to comment
Posts in discussion: Yashima: Legend of the Kami Masters in Review

jpat replied the topic: #211477 28 Sep 2015 11:52
My one game (so far) of Yashima left me fairly cold, but it took way longer than 45 minutes and was made frustrating for me by one thing that I thought would be one of the better things about it: the attack diagrams. The easy ones are easy, but when they involve ranges (especially ranges not including an adjacent hex) and they have "weird" shapes, it's hard for me to figure out whether my target's in the area of effect or not. Our firs/only game was a slugfest as well. Unfortunately, I don't think either of the two expansions in immediate development, both of which were offered through the Kickstarter, will do more than add more of the same. Still, it's a valiant effort and a good production and deserving of more than one try.

Michael Barnes replied the topic: #211479 28 Sep 2015 12:07
Yeah, you know, that part of it kind of made me think of Tash-Kalar (or, "Vlaada game nobody likes")...it's a similar kind of cognitive speedbump. I got used to it, mainly because I was turning the cards and kind of holding them over the board like some kind of old dude or something trying to sort it out. I think that having painted miniatures with very clearly defined "front hexside" coloring would help a lot too, especially since these figures are all over the place, twisted around and such.

I think you're right about the first expansions it looks like each just adds environments and a couple of new fighters.

Michael Barnes replied the topic: #211488 28 Sep 2015 12:44
No no, that's a very different kind of game...you've got units involved there. In this you have ONE unit. It's something like Yomi or BattleCON but with a hexmap. Or a Heroscape game with two extremely powerful characters with decks of ability cards. There are only four units in the game right now, typically you take one (or two) and that's it. So it CAN become more limited, especially in terms of movement.

Michael Barnes replied the topic: #211515 28 Sep 2015 17:05
Well, it kind of does at first but when you sort of learn to move around and maximize your attacks it gets more compelling...it really HAS to be played either three on one or two on two to get the most out of the abilities and the attack patterning. One character versus one other one is really not very interesting at all.

OldHippy replied the topic: #211517 28 Sep 2015 17:18
Yashima sounds like something I've always wanted to play. There is a really fun premise at the heart of that title that definitely appeals to me. It's too bad that it sounds like they don't really pull it off.
Read More...