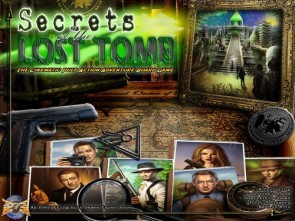 OK, so I've waffled around with Secrets of the Lost Tomb for too long. I kept trying it solo even though my group pretty much laughed it off the table- almost sweeping it into the box unorganized, which is the ultimate doom for a game- and I warmed up to it. Then I cooled on it again. Then I warmed up on it again. But then I realized that it is such a derivative, redundant design with some terrible production qualities that it just does not make a case for itself despite a couple of really good ideas and a neat concept that never really comes to fruition because the content it so scattershot. I hated writing this review because I dislike coming down on a designer's first game and all that, but honesty is honesty and I promised an honest review of it. I kind of felt like this game might have that kind of crazy-enough-to-work approach, but it's almost embarrassingly close to the Launius/Wilson/Coniescka Lovecraft games AND Betrayal at the House on the Hill. So the review is here at in the Review Section- it's rare for me to do a negative one, but here it is.

I drank whiskey last night and soloed Cave Evil with two Necromancers in light of the recent announcement that Warcults preorders are open. I had not played it in some time, it was good to get it back out. Loved it just as much as I always have. Murder Giant for the win.  It's an interesting design because it is really pretty old fashioned- one of those games that feels like it fell out of a time warp. I think it's very much a modern Titan, but it adds some cool stuff like the tunneling, the resource management, spells and equipment. Fans of that kind of design, circa 1982 or so, really need to be looking at Cave Evil. Interested in seeing where Warcults takes it.

I did a little trade for Mission Command: Sea of all things, a game that you used to be able to buy by the case for $4.99 a piece. What a neat little game- I know it's just Carrier Strike, but there are some cool updates. I tried it with River and he mostly understood it, but some things like the differences between Harpoons and Sidewinders were a little confusing. I really like how simple and direct it is, I like how the "to hit" numbers are based on range. I think I might get the Air one next. I used to have Tank Battle, which is the basis for the land one, but I remember not really liking it much.

Discuss this article
Log in to comment
Posts in discussion: Barnes on Games- Secrets of the Lost Tomb in Review, Cave Evil Returns, Mission Command: Sea

I absolutely adore it. The AIR game sucks. Great toy factor but the game itself isn't much fun. The LAND version isn't much better, but is slightly better than AIR. YMMV

Tim Champlin replied the topic: #212547 16 Oct 2015 00:32
Still waiting for that great Indiana Jones style game. I've been thinking about getting Fortune and Glory, but still not sure.

Indiana Jones 5 is still likely to happen (Spielberg mentioned it the other day), and Disney will likely reboot it after Ford retires/dies... So I'm hoping the great game in that license may yet come. #galeforcenine

"Everything Epic" is the name of the publisher. I know I'm a joyless crank, but this game would have to be farting previously unreleased Ultra Vivid Scene tracks for me to not put it back on the shelf at that sight.

Grudunza wrote: Fortune and Glory ain't "that great Indiana Jones style game." The Adventurers is lighter than I would hope for a real IJ game, but it is a good game, at least.

Indiana Jones 5 is still likely to happen (Spielberg mentioned it the other day), and Disney will likely reboot it after Ford retires/dies... So I'm hoping the great game in that license may yet come. #galeforcenine

I really think that Temple of Chac is the real deal Indiana Jonesing game.

SuperflyPete replied the topic: #212568 16 Oct 2015 09:44
It's not as stupid as I first thought. Yes, there's basically a rolling mechanic and that's about it, but the decisions about how to work together and pushing your luck are huge.