Barnes on Games- Thunderbirds and RESISTOR_ in Review 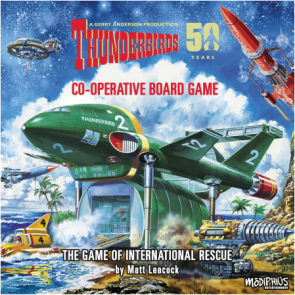 Yay, Thunderbirds is really quite good. Review here. It's definitely a Matt Leacock game, so if you've played a relatively unknown and obscure hipsters-only game called "Pandemic", this may be one to check out as well. It's not redundant with that game, and in fact it has some neat- and very Thunderbirds-y- concepts for co-operative play. The main thing you do in this game is kind of like what the helicopter dude does in his other games- you port other characters around to deal with crises. But in this game, you are piloting those incredible Thunderbirds machines. Not only that, the game is influenced by The Game of Life- you stick a little bust of your character into the Thunderbird. It's fun and it's a neat way to move specialists around the board to handle the disasters they are best equipped for.

This has kind of a weird effect though in multiplayer. Because even though you are a character, other players pick you up and move you around because each of the disasters usually gives bonuses for having certain IR members or vehicles. So it kind of feels like everything is mutual, which in a sense I think represents a sort of ultimate endpoint of the co-op design concept.

But hey, it's fun, bottom line. One thing I love about it is how The Hood works. He moves on a track and advances through the pop-up disaster cards AND by die rolls- so if you want to chance a roll to stop a disaster, you have to consider that The Hood might move. And there are three plots that you have to thwart- you see what the next one coming up is so you have a longview of what you need to be doing. Because if he makes it to even the first plot space, it's over. It's a neat way to keep tension throughout the game and pace the escalation.

It's colorful and the plastic Thunderbirds are cool (they have a sticker sheet!), but it's a disappointment that all of the pod vehicles don't have miniatures. But the upshot of that is that you can actually load their tokens onto Thunderbird 2 to cart them around to where they are needed.

So yeah, this is a good one. I think it is a little more esoteric in terms of subject matter if you aren't at least familiar with the show. I haven't watched it in decades, but I knew enough to get it. I played with a couple of friends that knew almost nothing about it and they could not have cared less about the subject matter. I just told them that it was kind of like GI Joe or M.A.S.K., 1980s supervehicle stuff but in the 60s.

RESISTOR_, from Level 99 Games, is so cool. It's like Netrunner circa 1981. The concept is that two supercomputers try to hack each other to prevent the other from launching their nuclear arsenal. It has that seldom-used thing where you can't see what's on the back of your cards but the other player can, which is a pretty neat mechanic here. Especially because you have to remember what is on the cards when you flip them over. The goal is to create a connection to the other mainframe five times. It's a very, very neat head-to-head game in a small box. Takes about two minutes to explain and 20 to play. And the box is like a console that you stick a cartridge into, it holds the cards upright and keeps you from seeing the back. Thanks to Brad Talton for giving me a heads up on this one. Review is also at the Review Corner.

I have reviews ready for Wings for the Baron (very good) and Hunt: Unknown Quarry (kind of shaky social deduction game, but interesting and very aggressive) but No High Scores is having a meltdown today. Hopefully it'll go back up shortly.

Zev's package came today, Clash of Cultures expansion and Merchants and Marauders add-on too. Very excited to get both of these great games back to the table. M&M adds a lot of stuff, looks like some of it may be superfluous but I'm hoping to do an EVERYTHING game with it because that's how I roll. The CoC expansion, which is apparently out of print forever now, looks _essential_. Some really cool additions, love that the civs all get a little unique tech list. It is already the best non-Civilization civilization game, this looks like it will push it over the top.

Playing lots of Brass and Steam, but on IOS, not IRL. Man, Steam is so much better when you aren't playing with a table of Mentats. Brass is really obtuse for me, I don't know why. I think I get it now, but I still can't win it.

Discuss this article
Log in to comment
Posts in discussion: Barnes on Games- Thunderbirds and RESISTOR_ in Review

Mad Dog wrote: I had no idea they weren't reprinting the CoC expansion. Did the base game not sell well?

Yeah, that makes me want to run out and buy both of them right now, despite the stupidity involved in that idea.

I can't believe they made a Thunderbirds game... what an odd property to turn into a game. It does sound cool though and I always dug the aesthetic on that show.

Gary Sax replied the topic: #215468 20 Nov 2015 00:14
^yep, if you see it, grab it up you may not find it again. Depending on how you like your civ games, it has essential fixes. Many people didn't like the no-unit differentiation (I liked the single army type) and TONS of people were begging for unique civs to railroad you from the beginning (I'm meh on it). They're both implemented pretty well, ESPECIALLY the unique civs.

Josh Look replied the topic: #215489 20 Nov 2015 10:07
If Thunderbirds is definitely a Matt Leacock game, then that's a deal breaker for me. Pandemic is best enjoyed in the fireplace, keeping your family warm.

Barney, get on this mate

SuperflyPete replied the topic: #215515 20 Nov 2015 15:05
RESISTOR_ sounds like it uses the mechanic from a game I just played (an Essen release) called Dark Matter.
boardgamegeek.com/boardgame/182101/dark-matter

Basically, it's a race for VP, taking over planets, but it's got that "you can't see the back of the cards" thing going, plus the cards are split lengthwise with each side doing something different. Essentially, each card is really 4 cards, of which you can only see two. Neat game. Very different.

Lego: If you get a chance to see Mr. Gray, ask him about this.

Everyone gushing about Level 99 games really owes it to themselves to check out Pixel Tactics. It's a really stellar design, extremely replayable, and will only run you $10 or so on Amazon:

I have played it twice, with mentats, bought a copy, sat on it unplayed for five years, then traded it for Blue Moon Legends. Maybe I'll grab the iPad version and hope they add multiplayer one day.

I'm kind of surprised you picked up the announcement about Thunderbirds, but not the one about Siege of the Citadel. The same company (Modiphius) is doing both games. The Kickstarter for Siege of the Citadel starts in the next month or so, with a goal of releasing it by October.

And no, this isn't an April Fools post. Here's the announcement from last October (2015):

johnkzin wrote: I just stumbled across this blog and forum, while looking for Siege of The Citadel stuff. You apparently did a post about it back in 2007.

I'm kind of surprised you picked up the announcement about Thunderbirds, but not the one about Siege of the Citadel. The same company (Modiphius) is doing both games. The Kickstarter for Siege of the Citadel starts in the next month or so, with a goal of releasing it by October.

And no, this isn't an April Fools post. Here's the announcement from last October (2015):