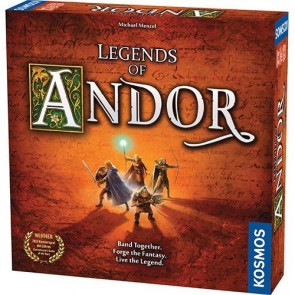 Weirdly, I never reviewed this...

I somehow never got around to reviewing Legends of Andor when it was first released in English...so I caught up with the new (not really very much different) Thames-Kosmos edition. It's a good game with a very different approach to presenting itself. There's a lot I admire about it, but it also doesn't excite me much. It is oddly rigid, formal and it can feel sort of over-scripted. And the combat is junk. But it is worth a look, and it is a good, lighter fantasy adventure game. I have both expansions, which I will cover together later. Review is here at Miniature Market.

My Warhammer Quest Adventure Card Game review is over there too. Five stars. It's a great, great game. Can't wait for an expansion. Not "line of expansions", please. Expansion. Maybe another if that one is good.

We also did a little "Most Anticipated Game of 2016" feature...I picked Scythe because others already had SW: Rebellion and the Doctor Who thing.

Speaking of product lines, I've been tooling around with the new Imperial Assault stuff. It's mostly good, there is a renewed emphasis on difficult terrain  and the new units are mostly really cool. Especially hateful-ass Dengar. I also really like the HK assassin droids, a cool callback to Knights of the Old Republic's HK-47. Leia is kind of meh, the Snowtroopers and Echo Base Soldiers are good. The Wampas are fun. I wish that the campaign was a shorty like the one in Twin Shadows though...or that they at least had some standalone scenarios to play other than skirmishes.

The Snowtrooper tank is kind of dumb though, vehicles just don't work right in this scale.

And of course, Armada. It is awesome. Believe the reports. It is also, sadly, monstrously expensive. But it's definitely a Cadillac game, and it shows. Better than X-Wing? I dunno. Remains to be seen.

I've got so much to go through right now it's getting ridiculous. Empires: Age of Discovery and Study in Emerald just showed up. I've got a box of like 4 HABA games on the way. Still have to file reviews for those Kosmos games. A critics work is never done, I suppose.

Discuss this article
Log in to comment
Posts in discussion: Barnes on Games- Legends of Andor/WHQACG in Review, New Imperial Assault Stuff, Armada

charlest replied the topic: #219956 14 Jan 2016 14:41
My first couple plays of WHQACG I enjoyed it and thought it was pretty good. As time went on I kind of mellowed on the whole thing though. Was looking forward to digging deeper into it, including trying the Delve thing but let go of my copy due to the outrageous aftermarket prices now.

metalface13 replied the topic: #219965 14 Jan 2016 15:13
I haven't finished the campaign, but I agree Delve is where it's at. I hope they do two expansions that follow along with the original WHQ expansions Catacombs of Terror and Lair of the Orc Lord. And a crap ton of character packs.

aaxiom replied the topic: #219976 14 Jan 2016 16:05
To be clear: I take it that the Delve quest isn't "broken"... is that the consensus here? I've thoroughly enjoyed the first two scenarios immensely, and thought of playing the Delve soon. Saw elsewhere that it's broken, thus the question, that's all.

charlest replied the topic: #219977 14 Jan 2016 16:08
I think people believe it's broken because there's no impetus to move forward. So you can sit still and heal up with characters like the Warrior Priest.

The missions in the campaign have a peril track with terrible things happening as time goes on, this is thrown out the window in the delve.

Barnes doesn't seem like the type of person to cheese the system like that. I think though it sounds like it could be a problem if you exploit it.

Anyways whilst I won't be in for a product line, i'd pick up an expansion or two.

How long does it take compared to something like TI3?

We picked up a bunch of Armada stuff from CSI when they had their big Halloween sale, and we're just starting to get into it these last few weeks. I really love it. X-Wing is a good game, but I never warmed to it for some reason, and now that there's a million expansions, I feel even less inclined to play it. But Armada, for whatever reason, has got me pretty excited. We haven't even used any of the Wave 2 stuff, and it still provides a pretty rich experience.

I like the Objective system and the whole 1st vs. 2nd player decision that goes into fleet building. The command dial and ship movement mechanics are clever and innovative, and I really like the dynamic between ships and squadrons. And it looks kick-ass on the table.

It does play long, and there's a bit of a learning curve in terms of integrating all the upgrades, but we didn't find it any harder to learn to play than X-Wing.

I hope it takes off. It might be hard--FFG seems to be almost competing against itself in terms of all the different Star Wars releases (RPG, LCG, X-Wing, IA, Armada, Rebellion, etc....) Can't blame them for trying to squeeze every little bit out of that licensing fee, though.
Read More...