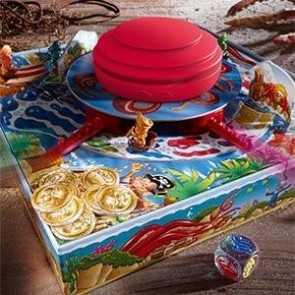 Titus Tentakel is not a game to introduce your children to "higher" gaming concepts. It does not provide more "meaningful" decisions than Candyland. It will not prep them to play all of your grown-up games with you. It is gloriously and unabashedly silly, simple and funny. This is a game where the components are a giant red button that causes tentacles to shoot out and a bunch of pirate monkeys in little ships. It's a roll-and-move-and-then-get-knocked-off thing, and that's pretty much all you need to know. It's not a Great Game of Our Time, but I play it with my kids and we laugh and have fun with it so I'd say it's a success. It's also a good example of how great children's games are often as much about product design as they are about mechanical design. All of the above said, I think there is probably a tremendous (and undocumented) late-night drinking game variant that shouldn't be too hard to sort out. Review is at Miniature Market.

We also ran a little St. Patrick's Day "Get Lucky" feature of luck-oriented games. I picked Catan, because it is essentially a gambling game.

Man, it's the doldrums right now. Not a lot interesting releasing, haven't had many opportunities to get together with anyone...I did have a friend bring Epic over so I got to check that out. I think I really like it, mainly because it does match up with the comments out there about it being like a MTG game starting on turn seven and with every card tremendously OP. And it's all in a single box, which is cool. We ran a couple of simple drafts and I really liked how that worked out, the games were interesting and with lots of back-and-forth. I think the rulebook maybe values brevity over clarity too much, I had to keep checking it for timing and keyword issues, but it's easy enough to sit down and get right into if you have any CCG experience. Love the resource system- both players get a gold on a turn, you can spend it or lose and all cards cost 1 gold or nothing. That's smart stuff. I also really like how it streamlines a lot of the fussier elements of MTG, timing issues and so forth.  I liked it enough to buy a couple of decks from a seller on Ebay, $6 a piece. Quite a bargain for a game that I think might have some legs as a sort of ersatz MTG.

Stronghold 2nd edition is turning out to be probably the best thing I've played all year. I think it's awesome. There are so many little touches in that design that I love, like how the targeting decks for the siege engines start out balanced to miss, but every time you miss you throw out one of those cards. So eventually, they become more dangerous as their crews zero in. I love how the invader resources work with three different values, but the defender gets only one time marker regardless of the value of the cube spent. I love how every battle is practically do or die, the stakes are super high. All of the options available add a lot of detail and nuance to the story, and it really sells both sides of the conflict. Both learning curves (!) are pretty high, but once you sort of see how it all works together it's not that complicated, really.  An awesome one of a kind game.

I've got Valeria coming, sort of a fantasy Machi Koro thing, it looks pretty good. Hopefully a little hipsters-only obscure game called Star Wars Rebellion will turn up at MM soon and I can grab it for a review. Other than that, any suggestions? I'm not seeing much of anything worth covering lately. Thought about head-to-heading Kyle on the new Marvel Civil War Risk, but apparently it's closer to plain ol' Risk than the last Star Wars one.

What's selling you on the new edition that wasn't there in the earlier editions?

wadenels wrote: If I remember right you weren't high on the original Stronghold... Did you actually get in any good plays?

What's selling you on the new edition that wasn't there in the earlier editions?

I'm curious about this too. The positives mentioned are all in the first edition. Also, I'm glad that they've pared the rules back a bit, but I'm not thrilled about some of the other aspects of the new edition: the new art direction is very... brown, the use of cards instead of mounted/overlayed artwork for the buildings seems unnecessary and adds more stuff to bump out of place on the table, the all-white-with-some-yellow-highlights cards look unfinished and ugly, and the new meeples are kind of lame and incongruous with the orc/goblin/troll cubes.

Ok so the aesthetics are kind of borked. That's subjective. But the rulebook is fixed, right (not what I'm hearing)?

This edition just seems like a mix of weird editing decisions that were made simply because the game was getting produced again, not necessarily to make the game better. But, I guess it's at least available again, so there's that. I half-regret selling my old copy but it kind of suffered from the Mage Wars syndrome of requiring a dedicated 2nd player to develop the meta.

SuperflyPete replied the topic: #224223 12 Mar 2016 11:28
The first edition of Stronghold was fiddly and chromed-out as fuck, and it made the game a miserable slog. I wanted to love it because it seemed to have all the hallmarks of "THE Siege Game", but no. I wanted it to be a game that I'd be OCD compelled to replace all the cubes with GW orcs or something. Never materialized.

I'm interested in hearing why this version is so much better.

MacDirk Diggler replied the topic: #224232 12 Mar 2016 13:06
Ya, Stronghold might be something I need to get. There is a dearth of reviews on 2nd Edition. Not even MM. Get on it Barnes, give it the full treatment. The people have spoken.

King Grunt replied the topic: #224240 12 Mar 2016 19:42
The kickstarter & pre-order copies of Level 99's Millennium Blades are shipping out in a few weeks. Given that you've enjoyed some of Level 99's other titles, maybe this one's worth checking out.

How is the rule book?

Does the math get in the way of the fun?

boothwah replied the topic: #224598 19 Mar 2016 17:13
I picked up Epic for $9 at the FLGS - gotten my moneys worth - Fun to draft, turn 7 magic indeed - after a few games there is a little bit more bluffing and timing to winning than initial expected - Very swingy and sometimes holding back and baiting your opponent into sweeping the board can be the way to go -much better the the thrid or fourth game with an opponent because those feints and bluffs mean something at that point.

MacDirk Diggler replied the topic: #224599 19 Mar 2016 17:39
It's like turn 7 MTG with one distinction. Half of all MTG games one of the players will be mana screwed and unable to make a 7 mana or even 6 mana play.
The problem I am having is my gaming buddies all have MTG decks and they don't want to bother with Epic. The advantage MTG has over it is people get emotionally attached to seeing how a deck they built is going to perform. So it's like MTG draft or danger room varaiant

quozl wrote: Paging Michael Barnes.... we want to know what's up with Stronghold.