Barnes on Games- Stronghold in Review, Lots of other Siege Games 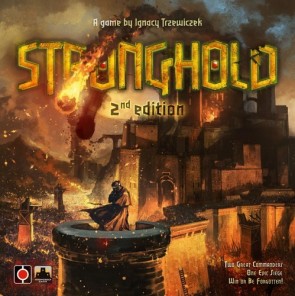 Weirdly, this week all I have to write about are siege games. Granted, three of them are VPG "States of Siege" titles, but one of them is Stronghold's new edition of, well, Stronghold. It's awesome. I think this is a tremendous game, and it has a lot of the same values that made Ignacy's later (and more successful) Robinson Crusoe so popular. Like that game, it is story heavy, highly mechanical design that is really quite complicated...and it also offers a one-of-a-kind narrative experience. It's fundamentally an asymmetrical wargame and it's harder to get to the table as a strictly two player (no multi, no solo) design, but it's a game that really rewards sticking it out through a crap rulebook and not one but two learning curves to get to the good stuff.

I can't speak extensively to the differences between first and second edition, because I had the first very briefly before I got frustrated with a) trying to sort out the rules, online FAQs, errata etc. and b) finding someone willing to do the same and play it with me. But this time around the rules are at least improved (and streamlined somewhat, cutting out some unnecessary fat like a 3-4 player option) and I had a friend that was familiar with the 1st edition sit down with me a couple of times to play through it. That made a big difference, and I didn't feel like it was a struggle to learn it this time.

There's really nothing else like it out there...the resource management is brilliant, the invader trades prep time to the defender and really kind of sets the tempo for the game. So the defender has to react to surges, lulls and enduring assaults. But the defender can split their attacks, focus on certain sections, buffet the walls with siege engines, rush in with sappers...there's so many options and so much that you can do.

It can feel a little mathy on the walls, but the stakes are literally do or die so those resolutions are extremely significant.

Five star review is at MiniatureMarket.com.

Victory Point Games sent me the new version of Empires in America, and that sort of set off a "thing". First off, EiA is really good. I have not played a States of Siege game since Levee en Masse hit IOS, and man they have come a long way. The first ones- Soviet Dawn, Arab-Israeli Independence, etc.- were decent time-killers with some historical flavor and a little drama, but they weren't really great games. This one adds a lot of cool things like leaders with fluctuating reputation ratings, morale, fortress battles, a light development concept, action cards and some other things that give the player more to do than to keep rolling dice to push markers back. So far I've really enjoyed this one but I haven't beat it yet. When Wolfe and the gang shows up, it's all over. But if you get Montcalm, you have a HUGE advantage unless he gets hit with bad rolls or event cards that lock him down.

So then I wound up getting the 2nd edition of Zulus on the Ramparts from Charlie. That one was probably the best of the "1st gen" States of Siege games. The newer version is really cool, in a small box with the updated VPG chits. I beat it the first game playing without options or advanced game cards, and then got destroyed when I added everything in. This one remains fun with lots of great historical flavor and some tough choices to make throughout.

And then Cruel Necessity was on St. Patrick's Day sale (because Ireland) so I grabbed a polybag of that one, as it is usually billed as the most complex of the lot. I've just played a few turns, but so far I think it is on its way to being declared the best of the series. It is by the same designer as Levee en Masse, so there are some similarities- political tracks and so forth. But there's definitely a lot more here.  Lots of die-rolling, but some fun pike-and-shot tactical battles. Looks like there are lots of options, lots of things that could happen to swing the game either way. It looks big and heavy, but it's not really that much  more than the other SoS games. So far, it feels more robust and wargamey than the others in the series.

Finally getting a hold of Baseball Highlights. Not a siege game.

Discuss this article
Log in to comment
Posts in discussion: Barnes on Games- Stronghold in Review, Lots of other Siege Games