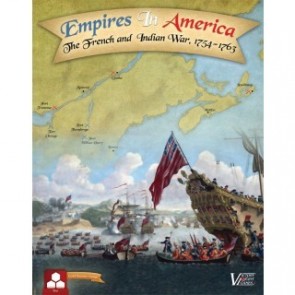 Topdeck Montcalm for the win!

OK, first off let's get that review of Empires in America filed.

Other than playing VPG titles quite a lot, I've of course been playing Star Wars: Rebellion, two games in with a buddy that pulled out his phone and ordered a copy halfway through the first game. It is pretty much exactly what you wanted this game to be, provided that you didn't expect it to be a TI3/4x style thing. It's kind of more of a worker placement game than a DoaM one, and in fact the weakest part of the design is the combat. I'm teetering on the brink of declaring the combat crap, to be honest. It's just overwrought, like how FFG resolution systems often are. It really doesn't need the +1 hit/+1 block tactics cards at all. It's just clutter. I almost think that it could be modified so that instead of drawing those stupid cards you just add hits equal to the difference in command for space and ground per leader ratings. So if you had 3 space command in a space versus 1, you'd just add two automatic hits. It would be cleaner and quicker. I do really like how it distinguishes between "light" and "heavy" damage, so that you don't have an X-Wing taking out a Star Destroyer. Unless you have something that lets you get that one in a million hero shot.

Overall though, I think it's one of the best games FFG has ever done, and it's the best thing Corey K. has done since BSG. Can't wait to play it more.

On the solo front, I've gotten in a few games of a couple of Thirstyman-maligned DVG titles and they were both pretty good. Warfighter is a modern spec ops thing that is really kind of a dungeon crawl in disguise. But it's a good one, with some fun gameplay and plenty of Call of Duty-style action. Some neat ideas in it- like having NPC-class characters that don't have hands of cards and can take limited actions. So far it's put up a good fight too, and I've enjoyed doing the loadouts and watching the cool narratives unfold. Thunderbolt Apache Leader is probably the best game of that series that I've seen so far. It takes a bit to get going, but once you've got a couple of AH-64s and A-10s kitted out and blasting through Iraqi armor, hoping that the AA guns don't stress your pilot out or fill his chopper full of bullet holes (which stress out the next pilot to fly it if you don't fix them), it's lots of fun. Definitely managerial, but in a solo setting that works.

Pax Porfiriana prompted me to check out Greenland, Phil Eklund's "other" tableau builder, and after reading through the rules and having no clue what to do, I finally sorted it out by just setting up and playing a solo game. I think I get it now. What a lot of words to describe a dice placement game. It's typical Eklund- TONS of detail, lots of rules that exist only to simulate something, inscrutable graphic design, bizarre icons, impenetrable strategy. But I feel like I understand what's going on in it a this point, and it looks quite interesting.  There are some neat opportunities for negotiation and direct conflict, lots of elements that convey atmosphere and setting, and a real sense of challenge. Definitely looking forward to getting into this one more.

Discuss this article
Log in to comment
Posts in discussion: Barnes on Games- Empires in America in Review, SW: Rebellion, some DVG stuff, Greenland

You don't have the Footlocker do you? There's a manual in there with pre-designed special missions that alter setup and give you soldiers and a loadout so you don't have to mess around with picking any. It's really nice when you don't want to spend time prepping before the mission.

well thats glowing praise. Get off the fence, you know its shit. Or at least if you bother to play it a few more times you will realise it.

Michael Barnes replied the topic: #225574 08 Apr 2016 15:27
No, I don't know it's shit Lee. It looks really cool- but it also looks like it's typical Phil Eklund, which means that it's difficult to grasp and it requires a little more work than most games. I've never played any of his games that I thought were shit...and that includes some REALLY dodgy ones from the early days when he had more ideas than sense. Which is kind of still the case, really...not on the fence about it at al, enthusiastic and interested, whaddya want from me? :;P

No, I don't have the footlocker...just the base game. But I've got the first three expansion packs coming because I do think you need them to get a better sense of possible loadouts and tactical options. I didn't know about the scenario book, I will definitely have to look into that.

I soloed it last night, it was crazy. Just tore through four locations worth of insurgents. But then we hit this side street and they started piling on, hitting every reinforcement draw and blocking progression with freakin' +6 to entry. Suddenly it was like Blackhawk Down or something. Four turns of being in a meatgrinder, finally broke through (with an NPS dude getting killed) but it was too late, time's up. Abort!

Really enjoying it...the game it reminds me the most of is actually Warhammer Quest ACG. But some of it is more complex, some of it is simpler.

Actually LOVE the reloading mechanic...very tense when you're just burning through clips and you're not halfway through the mission.

charlest replied the topic: #225576 08 Apr 2016 15:34
Yeah that's classic Warfighter. WHQACQ didn't grab me for some reason and I ditched it when it was between printings. I didn't get the same sense of narrative from WHQ because the battlefield didn't seem as dynamic. Part of that is because enemies don't regularly spawn so you lose that tension and sense of change, part of it was because the locations in WHQACG didn't feel as solid to me. They are more abstract and have less of an influence. The entry costs and how you can go back and forth between different locations, combined with the reinforcement values really makes a market or village center feel different than open ground, say.

I really like the card play of Warfighter too and think it's much more interesting than WHQ. The hand management and paying the entry cost to get into locations really adds oomph.

I can't remember if there are any vehicles in the core, but wait until you hit a Technical or even a BMP which is in one of the expansions. I also think some of the expansion missions are fantastic. I love the Escape ones personally where you run through the locations backwards.

wadenels replied the topic: #225585 08 Apr 2016 17:37
Greenland is pretty cool. The rules aren't really that difficult; they're just written Eklund-style. If you want more of a flow-of-play style rules get 'em here . Formatted narrow so you can cut 'em and fold 'em and stick 'em in the box.

I really like how after every game of Greenland you've made a little story about your scrappy little tribe and their attempts to survive. It really plays best with 3, but it's fun with two as well.

But yeah, I saw some of that "We hunted a whale...but Sven was eaten. Then his son married Peepeelee. And we made a spear."

Maybe I'll host an Eklund Day. We'll all watch Atlas Shrugged Part One, jerk off to a pic of Margaret Thatcher, and then be in a Phil Eklund mindset all day to play Pax Porf, Pax Pam, and Greenland.

Dan Thurot replied the topic: #225616 09 Apr 2016 13:44
We had a great "Eklund Weekend" not too long ago where we managed back-to-back games of Greenland and Neanderthal — fun because you can string them together and watch as your tribe goes from stone age to iron age — and then managed a couple games of Pax Pamir. I can understand why Greenland/Neanderthal turn so many people off, but they're possibly my favorite dice games.

Maybe I'll host an Eklund Day. We'll all watch Atlas Shrugged Part One, jerk off to a pic of Margaret Thatcher, and then be in a Phil Eklund mindset all day to play Pax Porf, Pax Pam, and Greenland.

You'll need to let your car engines run outside since climate change is no big deal.

It's set during the "Great Game" in Afghanistan. Everyone plays as an Afghan tribe and curries favor with one of three empires — the Afghans, the British, or the Russians — and in order to win you need to be the most influential tribe within the empire that you prop up to supremacy. It flows better than Pax Porfiriana, but its victory conditions can seem a bit opaque until you've got a few games under your belt, largely because victory rests on any number of factors. First, you need to help your chosen empire beat the others, which in of itself is rather difficult, and then you need to be the premier tribe within that empire. Most actions aren't available until you add them to your tableau via purchased cards, so you're balancing your political, military, economic, and espionage fields with things like tableau size, a healthy hand, bullying the cash on the table, etc. It's complex, multilayered, excellent stuff, but it requires a dedicated group willing to see it through those first couple plays.

SuperflyPete replied the topic: #225627 09 Apr 2016 14:57
I just got Worthington's "Boots On The Ground" and it reminds me a bit of games like Apache Leader. The production is HORRIBLE though and it's way too much of a "war games for beginners" type game.

Not sure why I posted this, felt appropriate to the discussion though.

Unicron replied the topic: #225688 11 Apr 2016 11:07
Great review! I really really appreciate Warfighter for the way its difficulty can be offset by refining your strategy. I didn't feel effed by a random card flip (Shadowrun: Crossfire). Over the course of several plays, you get a better sense of how many should be in your squad and how best to equip them. I'd love to see the dungeon crawl version.

Cranberries replied the topic: #226248 21 Apr 2016 19:05
Oh sure, now that I've just traded off Greenland for a box of Netrunner, you're turning it into Game of the Year. Now I have to buy Pax Pamir and pretend that I can find a group that will play it. I love the theme.
Read More...