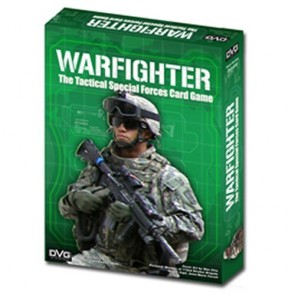 Pretty much "Blackhawk Down: The Card Game"

OK, let’s review Warfighter. I guess Dan Verssen’s stuff is take it or leave, but I am in the “take it” camp. I like the majority of the games I’ve played from his imprint, I like that what he does is very much like those late 1980s Avalon Hill kinds of kinda-sorta wargames- stuff like Guerilla. Warfighter is definitely in that same lineage and I think it’s one of his best to date. There are a couple of missteps- the game looks like a tragedy, especially with some of the circa 1998 CGI models on the card- but mostly it’s a  fun co-op game with a rare modern-day special forces setting. I have the main game and the first three of the expansions, and I think that’s about the minimum I would want from it. You want to have lots of loadout options, because that’s a huge part of the game. It really reminds me to some degree of Warhammer Quest ACG, but with tons more customization and without that game’s greater refinement.

But the #1 game on my table right now is Silent Victory. Yeah, I’m surprised too. I have NEVER been interested in submarines at all. Or anything naval, to tell the truth, apart from a brief flirtation with Flying Colors some years ago. But for some reason Kyle Mann’s review at Miniature Market made me want to try it, and I did, and I just love it. It is SUPER old fashioned. Like, most of the game is charts and paperwork. You command a US sub in the Pacific, and conduct patrols looking for convoys, freighters and military ships. It is all 100% random. Then you shoot torpedoes at these ships, and if it’s early in the war most of them turn out to be duds so you cuss a lot (or you can play the optional, realistic rules where the crappy Mk14 torpedoes run circular and come back to hit your sub). You have to choose between trying to wait until nightfall, to attack on the surface or submerged, those kinds of things. And if you get spotted, you have to choose if you want to crash dive and there’s a whole bunch of damage effects that can make submarining harder. When you get back after your two month patrol, there are awards and you might even get to upgrade to a new sub as the war goes on and you get promotions.

Really, it’s not a wargame. It’s a solo RPG. The rules were pretty intimidating at first because they straight out of an SPI game circa 1981, but once I got the flow down I could run a full patrol in about 20 minutes. I haven’t completed a full campaign yet, but the one I’m on (the USS Sharkbowga) has been a comedy of errors. But we’ve made it back every time. Now I want Hunters too.

I finally got to play Freedom: The Underground Railroad courtesy of a trade with our very own Geoff Englestein. I really like it a lot, but there’s a strange sense of square peg, round hole with the setting. Don’t get me wrong, it definitely tells a strong historical narrative about a subject that is NEVER in games and it is beautifully produced to frame this story. But something about the mechanics and what is going on kind of don’t match up. I guess it is “gamey”, especially in how you can effectively bait the slave catchers (which my friends have already called the Paddyrollers, and sing that song that Paul Dano sings in 12 Years a Slave when they are on the prowl). But it’s like you are willfully choosing to sacrifice escaped slaves, which is something I don’t think is really part of the historical story. And it’s really, in a way, a transporation/rails game. Making money is critical, and maintaining an income is key to victory. Then there’s this whole thing where the pathways get gummed up and slaves wind up just dying straightaway as they leave the auction because there’s no room at the plantations.

It is pretty hard though, I’ve played four times (two times with three players and twice by myself) and no wins. It’s a fun game and handles the story of the subject well, but it isn’t anywhere near a simulation of the real underground railroad.

Discuss this article
Log in to comment
Posts in discussion: Barnes on Games- Warfighter in Review, Silent Victory, Freedom

charlest replied the topic: #226750 02 May 2016 08:49
Hunters is pretty good if you dig that B-17 experience. It can get repetitive long term since it's pretty much just random chart rolling, but it's colorful and kicks off your imagination.

The campaign book, storage system, and night fighting cards make it a great purchase. If you plan on adding in the second wave of expansions, the reprinted cards for first edition owners are nice. Some of the new pieces of equipment and attachments trigger off keywords that weren't originally in the game so you'd have to make some guesses or look some things up.
Read More...