Barnes on Games- Secret Weapons of the Third Reich in Review 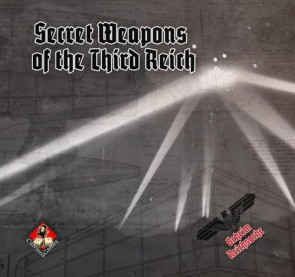 The "Chinese Democracy" of board game reviews has arrived...

F:ATtie Calvinus was kind enough to send me a review copy of Secret Weapons of Third Reich for review. Like, six months ago. So let me preface this by apologizing to Calvinus for it taking so long. He pinged me in email a couple of weeks ago and I was like “oh crap, I need to take care of that.”

But here’s the thing. When I first received the game, I messed around with it solo and found that the rules were difficult to follow, the mechanical concepts were not clear, and to be honest I wasn’t sure that there was a game worth covering in the box. I tried to play it twice, once with a friend who had zero interest in continuing after a coupleof turns and another time in a group of four where I totally botched explaining the rules. Which goes back to, of course, the obtuse nature of the rules writing.

So Calvinus’ email prompted me to pull it out and have another look at it. I kind of grimaced at the thought- especially once I started handling the Game Salute-quality (read: poor) components and reading through those rules again. And once again, my eyes kind of glazed over at the icons, the bozo graphic layouts and the awkward sense of extreme specificity and zoomed-out abstraction. But with a couple of Phil Eklund games fresh in my mind, I approached the game from a different angle and realized that Secret Weapons of the Third Reich is very much like one of that designer’s games in many ways, and it is one of the few games that I think you could accurately describe as “Phil Eklund influenced”.

The concept is a million bucks, despite the cheap production. As the title suggests, the subject matter is the World War II arms race from the rarely attempted German perspective with just a touch of alternate history and science fiction mixed in with historicity. That’s right, this game is about guiding Nazi super-science programs from inception to fruition. Don’t worry, the only politics represented in the game is a little track that indicates what types of projects Herr Himmler currently favors and a Loyalty rating assigned to certain project researchers. You are not expected to subscribe to or sympathize with Nazi ideologies.

It’s a fairly complicated worker placement game where you will draft project cards such flying saucers, moonbases, occult expeditions, death rays and others and then assign scientists and funding (resource cubes) to them.  Once a proposed project meets certain staffing, funding, and existing technology requirements, you actually have to choose a place on a map where it will be conducted and where the weapons it produces will be generated. But over the course of the game, Allied bombings and attacks can wipe out locations. There is direct player competition as there are some take-that event cards, assets can be stolen (ahem, subject to “requisition”), trading and deal-making is allowed, and there is also “turncoat” variant that allows for one player to secretly work at cross-purposes.  Despite the interactions, the solitaire option is definitely worthwhile, with just a couple of rules changes required.

My recent multiplayer outings with it- playing with two and three players – went much smoother because I felt like I sort of “got” the game better than I had previously. But there were still furrowed brows, confusion, and lots of rules-checking. Nothing is intuitive about this game from the way the action selection track appears on the board to the way you acquire resources. I wouldn’t say that the game feels unfinished or that it is poorly designed- far from it- but it does lack the kind of polish and refinement that could make it a very, very cool game with a unique concept.

But the thing is, it has that Phil Eklund feel. You get a sense that designer Luca Cammisa really put in the due diligence to research this stuff and come up with plausibly hypothetical projects and it has that kind of extreme specificity wired into its mechanics that you’d expect from a Sierra Madre title.  So your choices are to do what you do with an Eklund game- grin and bear the esoteric icons, awkward processes, and WTF graphic design to get to the good stuff, or you pass it by. That means that I think that Secret Weapons of the Third Reich is by default a “not for everybody” kind of game, but I also think that those who know what they are getting into and are comfortable with a design and a product that are not presented at FFG levels of spit-shine polish will find a fascinating, unusual game here.

It took something like six months for me to warm up to it, but I’m glad Calvinus shamed me into catching up with the game- and I’m actually glad I waited to write it up with more experience and fresh eyes. I would love to see this game in a second edition, with a rulebook, production quality and visuals more in line with something we’d see from GMT or even Victory Point Games. With a little more development work, Secret Weapons of the Third Reich could find a larger audience beyond the more adventurous and accommodating game players willing to look past the rough edges.

Discuss this article
Log in to comment
Posts in discussion: Barnes on Games- Secret Weapons of the Third Reich in Review

ThirstyMan replied the topic: #227118 06 May 2016 13:32
Mmm, I'm struggling through Origins: How We Became Human at the moment. My God, the rules are really badly presented. It's really hard to get to the actual game through the obscure ruleset and presentation.

I'm hoping the recently completed Kickstarter for High Frontier comes with a totally revamped and understandable rulebook (I'm told it does).
I'm not frightened of extensive rules (I'm an ASL player for God's sake) but this is ridiculous.

Michael Barnes replied the topic: #227126 06 May 2016 14:22
Origins is really, really interesting...but man, it is Eklund at his WORST in terms of presenting and explaining information. $400? If I still had it, I would sell it in a hot minute. I've always wished that he would do a second edition of it with some major usability updates.

Of course, this is Eklund we are talking about, where clarification means something different to him.

Ok, not that it matters to me, but weren't a lot of those workers slaves?

I say this as someone who spent two years in Qatar, also known for their institutional slavery.

Leaving Earth is awesome, and entirely playable in a way that High Frontier isn't...quite. More after I try the rest of their stuff.

jur replied the topic: #295437 13 Apr 2019 08:09
Played this last week and agree on the whole. There seems to be an interesting game hidden beneath a badly written ruleset. I spent quite a lot of time going through the rules before I dared to bring it to the table and I still missed essential bits tucked away in paragraphs. Which is a shame because the theme is awesome and some of the elements included, like Himmler's pet projects, really speak to the theme. Although I have a better grasp of the game now after filling in the gaps by rereading the rules after playing, I;m not sure I can get the players to play it again.

If you want a similar theme but smoother execution, think Manhattan Project.

Ok, not that it matters to me, but weren't a lot of those workers slaves?

I say this as someone who spent two years in Qatar, also known for their institutional slavery.

Yes, part of those workers would be slaves, POWs (like my grandfather), Jewish inmates of concentration camps and semi-voluntary foreign labourers (Arbeitsdienst)