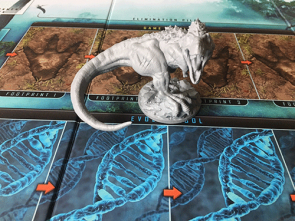 Here’s the official 3 star word on Apex Theropod. In the end, it’s a Kickstarter game. There are some million dollar ideas here, and the concept is a can’t-miss one. But it’s a prime example of how professional development, a little gatekeeping, and NOT designing a game as you go along (including, apparently, throughout the second Kickstarter campaign) pay off. I like the game, I think it is actually a better game than Legendary, which is its closest analog, but there’s just too much sloppiness and jank. If it were cleaned up by a crack development team, it could be one of the best deckbuilders. Instead, it remains one of the most interesting ones. All that said, any fan of dinosaurs should really check it out.  There’s lot of fun to be had just playing dino vs. dino battles.

Four quests deep into Silver Tower, I’ve been soloing it and playing with a couple of friends so I’ve done the first four twice each (the first one three times, actually). I think I can say at this point that this is about as Barnes GOTY as it gets. I completely love this game, and although I understand shirking at the price, there simply is not a better dungeoncrawl on the market. It’s as simple as DDAS, but there’s more to it. And the setting is THE best in any dungeoncrawl on the market- it totally sells the weird, psychedelic fantasy angle- its way more Moorcock/Vance/Zelazny  than Tolkien.

Lots of narrative and tons of completely bullshit “winds of magic” moments. The difficulty is somewhat scattershot- sometimes the random (ahem, unexpected) events just completely destroy you. Or some Kairic Acolyte pulls off a lucky hit and puts one of your people down two wounds in one swing. But other times, you are just clearing rooms and bulldozing through.

I really, really like having the monster behaviors in the book instead of in piles of cards. This game eliminates a lot of table clutter by  just putting tables in the books and having everything printed on the hero card that you need to know.

It’s lean, super effective and beautiful.  I can’t wait for more- I was talking with my buddy about it and we are hoping that they do a full set for each of the chaos gods. Starting with Slannesh.

I have finally played a COIN game. Cuba Libre’s new edition courtesy GMT Games. I just did the tutorial run through and then some turns with the training wheels off. It’s great, I think. I’m not sure  because I still feel like I’ve barely dug into what this game has to offer, and it seems like the multiplayer game could be supremely fascinating – if you have three other people who have committed to learning to play it and have learned all of the factions. It’s tremendously evocative, the mechanics are rich and compelling, and the story it tells is amazing. It’s definitely an evolution of the CDG concept, but I think it seems like it will work better than some of the other multiplayer CDGs because of how the cards are used. I also have Falling Sky, which is supposedly on par with Cuba Libre in terms of complexity/length, and now I’m eyeing the other games in the series.

I’ve also got in a few games of the 51st State Master Set. I definitely prefer it to Imperial Settlers, there’s just a little bit more going on but that little bit makes it a lot more interesting. This set is DEFINITELY easier to get into than the original release, which had bozo rules and layouts. It still seems to have that Imperial Settlers thing where everything slows down as the game moves on, but it’s more agreeable here with more meat on its bones.

I have the Doctor Who Card Game, the Martin Wallace one, but for some reason I can’t get it to the table. I don’t really have any Whovian friends, which seems like it may be mandatory to be a Whovian to care anything about this one. It looks OK, pretty simple stuff, but it has really good illustrations (!) and lots of classic Doctor Who stuff.

Last but certainly not least, Food Chain Magnate showed up. The art direction on this game is just freaking fantastic, I love the midcentury style. Great colors and some fun copy evocative of the era. Looking over the rules, it looks interesting…like they made a game out of org charts and then some weird, old fashioned Eurogame stuff. I’ve heard repeatedly that it is brutal and unforgiving so I hope it is FUN and brutal and unforgiving. I like business games a lot, and it’s been a while since I’ve played a good one so I’m looking forward to it. Hopefully this weekend I can get a 3-4 player game in.

And I also got Betrayal at Calth in. Good god, it's full of sprues. The minis are actually a little more difficult to deal with than the WHQ ones, and it has that OMG you must decide what gun this dude will hold FOREVER. I don't wanna hear about using tiny rare earth magnets or anything like that, I'm just going to make a decision. The game looks awesome, but be warned that you sort of have to paint it (at least basecoat) before you play. The Ultramarine and Word Bearer figures are the same.

I can't tell if the unique "achievements" in Food Chain are good design or bad design.

I'm a huge fan boy of COIN and I enjoy all of them. I've played Andean Abyss with some of our own Fatties via email and VASSAL. It was great, particularly with the trash talk. Fire in the Lake is a crowning achievement IMHO. I have Liberty or Death and Falling Skies but haven't tried them yet. There's a two player one coming out. Can't remember on what war. Currently soloing A Distant Plain (Aghanistan Gov, US Military, Taliban and Warlords) and having a good think on how to stymie the US Military while playing the Afghan Government. Very good indeed.

Labyrinth is not a COIN game in case you were wondering.

I was in that Andean Abyss game, and it was great fun. (I even blundered my way into a win...)

I bought it for the long-wait shelf based on that, and Fire in the Lake as well. We should get a F:AT game of _that_ going.

I keep hoping I'll scrounge up the group to play those in person, but it keeps failing to happen. They're not rocket science, or even more complicated than a heavy Euro, but the themes can be a hard sell to sheep-pushers.

I _really_ like the common card in play with the prioritized choice on it...and how what you leave for someone else to do is such a huge strategic concern. When I was working through the tutorial, my mind was just reeling at the potential. It's just brilliant and vast. I'm not really sure if I want to go into the more complex ones just yet, even though Fire in the Lake is the most interesting to me subject matter-wise.

I would be willing to bet that MOST games of COIN titles are played online. In fact, I would go so far as to say that online play is one of the things that has enabled games like that to stay current and relevant. I can't imagine any of my friends really digging in to play it. I've got two that I think _may_ if I send them PDFs of the rules, but I doubt they will want to play it every Sunday for two months like I'd really like to.

Don't know if Doctor Who is going anywhere, Andy...it doesn't look very good...but it's the only card game I have that has The Black Guardian and Ice Warriors. And it's small and cheap, which sort of undercuts my usual incentives to ditch. My son saw it and said "Daddy, why are you hiding that Doctor Who card game from me?"

Shellhead replied the topic: #228579 03 Jun 2016 16:43
Silver Tower looks interesting, but the miniatures make it really expensive and I would probably never play it enough to justify the time spent painting those minis. I really wish that there was an option to buy the game with cardboard standees with nice art on them.

DukeofChutney replied the topic: #228580 03 Jun 2016 16:51
Interesting to here that Warhammer Quest is good, Tzeentch is pretty cool. GW's idea of Chaos was more or less lifted from Moorcock so what you way makes sense. I look forward to the review.

Michael Barnes replied the topic: #228582 03 Jun 2016 17:04
I don't know if it's still on there, but someone on BGG in the Silver Tower forums linked to some standups they made- they looked pretty good, just a couple of PDF downloads. And you can probably buy the game without figures for 1/3 to 1/4 of the price on ebay.

The game really captures the themes and concepts of Tzeentch- lots of psychedelic/psychotic goings-on, mutable and ever-changing dungeons...it has the feeling that you are going through these portals into entirely different rooms that aren't necessarily "adjacent", so to speak. And then shit just pops up out of nowhere.

ThirstyMan wrote: I'm pre booking the Dr Who game in anticipation of you getting rid of it...

ThirstyMan replied the topic: #254486 19 Sep 2017 13:51
That's a different game which I'm not really interested in. I ended up buying the card game but that miniatures game didn't excite me. Waiting on the GaleForce boardgame.