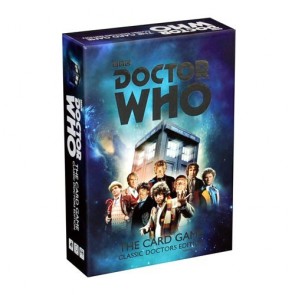 I’ve got two for you up at Miniature Market today. The better of the two is…drum roll…The Doctor Who Card Game: Classic Doctors Edition! I really thought this was going to be terrible despite the Martin Wallace pedigree and my deep love for classic Doctor Who. But it turned out to be a pretty neat game. It’s simple and not very specific to the setting/characters, but it is fun with some good design and if you know the show, TONS to riff on and talk about. Granted, fans of classic Doctor Who are fewer and further between these days so the appeal of this game might be very limited. Even more so than with the previous “boyfriend Doctors” edition. I actually kind of want to get it and the new 12th Doctor expansion because you can combine them.

The lesser of the two games is…drum roll…Food Chain Magnate. I gave it three stars and I think it definitely deserves a good, positive-leaning review…but I don’t really enjoy the game. I think it’s a terrific, occasionally brilliant economic design with some awesome supply/demand/marketing mechanics and that same kind of satirical eye that Splotter had with Greed, Incorporated. But the game just isn’t really fun, it doesn’t quite trigger the pleasure centers. It feels something like a deckbuilder crossed with an org chart crossed with a logistics game. Which may, in fact, be “fun” for some people and it apparently is “fun” for them.  But I’m just not feeling it, and I like economic games. I tried to play it face to face a couple of times and both times were just a total bust…it’s dense enough with rules, and then you’ve got all of these Milestone cards with special abilities on them that sort of over-shoot the complexity mark. And it’s long, and slow paced.

But I did enjoy it more using the Boardgamecore.net web application. It automates a lot of the processes and it helps A LOT in determining where you can/can’t place things. It made the early games feel not quite as much touch-and-go, but it was still completely, unabashedly unforgiving. One botched turn and you are done. Which isn’t a big deal in an online game, but for a four hour sit-down it could be terminally frustrating.

So very mixed feelings on it…nowhere near as good IMO as Greed Incorporated or Antiquity, better than Roads and Boats.

Other stuff going on- Carl Chudyk’s Bear Valley is pretty neat, definitely an unusual take on the adventure genre with some Chudyk-y mechanics. Animals on Board is a HUGE hit with my kids. I didn’t realize Stellar Conflict was a remake of Light Speed.  Piratoons hasn’t been played yet but it looks like a simpler, more family-friendly take on Galaxy Trucker. Tyrants of the Underdark just showed up but I haven’t looked at it yet.

Digging Tanks very much, just wish the expansion packs would hurry up and ship out. River is really into it, and he’s excited about building and painting more of them. There’s something kind of old fashioned about it that I love, that it’s a model kit with a simple game attached to it. There is a TON of room for them to develop this into a sort of simplified Flames of War, and I hope it goes in that direction. Now I’m looking at coming up with some cheap 15mm terrain for it.

I put together most of Deathwatch: Overkill over the past two days. Be warned that it requires a little more assembly than the other recent GW titles. There are a TON of Genestealer hybrids. Really excited to play this one, the concept is awesome. Deathwatch is sort of a Dirty Dozen-style group of Space Marines seconded from various chapters to an elite ops sort of group. They are all named characters and each has completely unique wargear and armor. One of the dudes is a mustachioed biker with a hawk, riding a motorcycle with twin-linked bolters on the front.

Betrayal at Calth continues to impress- I think it might be one of the best standalone games GW has ever done. It is the authentic Warhammer 40k (well, 30k) board game experience you have always wanted.

Legomancer replied the topic: #229077 17 Jun 2016 16:57
I tend to avoid licensed stuff, and when I saw that the original version of that Doctor Who game (with the 11th Doctor) had a "Jammy Dodger" card in it, I said, "Ah, okay, that's the kind of game it is." and did a hard pass. (Plus there isn't much of anything about the 11th Dr's tenure that I want to be reminded of.) I hadn't heard much good about the gameplay from others either. As with the Firefly game, the primary appeal seems to be looking at depictions of things on the show and reciting lines and no thanks.

Gary Sax replied the topic: #229078 17 Jun 2016 17:55
You're right to point out that Food Chain Magnate is VERY satirical. It's basically an extreme send up of capitalism re: marketing and the gullibility of consumers. Demand for new unique products is generated by companies making the products and consumers are little more than passive suckers who are waiting to be shown a more complicated product to pay more for.

Brewmiester replied the topic: #229079 17 Jun 2016 18:12
If you have too easy of a time with the Space Marines vs. genestealers in D:O, issue 114 of White Dwarf has a new scenario with Militarum Tempestus Scions vs. cult.

I love those Scion models, I might have to take a look at that.

Yeah, FCM's satire is one of the reasons I felt like it deserved up to three stars...Splotter is VERY slick about having real themes and an actual message in their games. I don't think it is as pronounced as it was in Greed Incorporated, but they are definitely sending up not only consumerism and marketing, but also corporate "food chains", so to speak. There's almost a kind of clever piece of wordplay going on there, because the game is just as much about managing that corporate food chain (the org chart you lay your cards out in) as it is about selling junk food. And then there's this whole thing going on about making your structure more complex with middle managers, and the balance between having skilled but expensive workers and laying them off to get cheap help on the payroll. But man, it's just not fun to play. I laid the cards out for a couple of friends before trying to explain it all and one of them just said "Jesus..." looking at all of the Milestones.

But you know, it is one of those kinds of games where if you really commit to it and learn it in and out, it could be something you get a lot of play out of.

Dave, there's no denying that TDWCG is just a big ol' hunk of fan junk. Totally. It barely even tries to meet up with the Doctor Who settings and Characters. But the game is pretty fun to play as a super casual card game with a couple of Martin Wallace twists to it. The problem is that if you're not familiar with the characters and such, it's harder to make an argument for the game simply because there are many better card games in this class. I'm not as down on licensed stuff as you are, provided that it's done respectfully and has something to offer beyond merchandising...I think this one is just on the right side of that. It's also one of only five Doctor Who items I own aside from the entire series, a couple of books and a badge.

Sevej replied the topic: #229122 19 Jun 2016 20:32
Nice to have confirmation from someone other than me on Battle of Calth. I'm thinking to expand the system across races. The idea is that you can buy a box of troop and play it with Battle of Calth rules. The new boxes for rank and file is amazing. The latest Tau Fire Warriors have plenty of weapons. Shotguns, rifles, carbines, and even some turrets.

And I forgot to mention that I played Tyrants of the Underdark. It's neat, but it's essentially Ascension with area control tacked on. So if you are like me, and are over deck building, give it a pass.

Michael Barnes replied the topic: #229132 20 Jun 2016 00:55
I got to play Tyrants a few times over the weekend. It is a perfectly competent, well-designed deck builder/area control game. Kind of Ascension meets El Grande with some intrigue and plenty of interaction.

It is also patently uninteresting. If it had come out three or four years ago, I think it would have have been more significant. If it had come out right on the heels of Waterdeep, for example. But about halfway through my first game I was thinking about how much I did not want to be playing what amounts to a second-gen deck builder regardless of some cool twists.

I dunno, feels around a workmanlike 7 at best.
Read More...