Barnestorming- Animals on Board in Review, Descent RTL Round Table, Deathwatch: Overkill 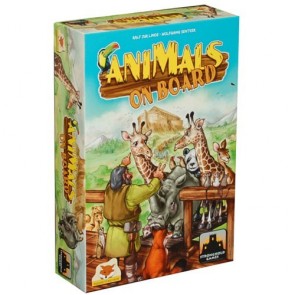 The best game ever made about Noah's Ark.

OK, let's start out with the kids stuff- 2016 SDJ nominee Animals on Board, brought to the US by board game tycoon Stephen Buonocore and the gang over at Stronghold. It's a really, really good family game that plays like you would expect a classic SDJ game to play. Simple enough even for the very young, but with some subtle intricacies that will appeal to the more gamerly types. My kids LOVE it, it's asked for almost every day. I don't think they quite get the scoring yet, but they still enjoy making the groups, luring them with food crates, and sending the pairs off due to Noah's requisition of pairs. Fun stuff, and worth a four star review at Miniature Market.

We have a roundtable discussion of the Descent RTL app up as well- a couple of us just sort of rapped about it a little, what it does, what it means and where it could go. Noted F:AT personalities San il Defanso and SuperflyTNT contribute as well. It's here if you care to follow up on Egg's review of it posted here today.

The summer of GW everything continues. It may as well be the GW Reclamation Project at this point. I am now in possession of every complete, all-in-one game they've released since Space Hulk and every one of them so far has been a big winner. The latest I've acquired is Deathwatch: Overkill, which pits a crack team of elite Astartes culled from the best ten chapters have to offer the Emperor against a Genestealer Cult infestation on a mining planet. There will be blood. And skulls.

I played this with a friend and the first thing he remarked was very telling- "there aren't any counters or anything in this". There is not one single counter of any kind in the entire game. Which is actually kind of weird. There's a deck of ambush cards (which the Genestealer player uses to spawn and play nasty surprises) and information cards for each of the SMs and special Genestealer units. Plain D6s. Oh, and a range ruler (don't worry, it's just assault/combat/maximum).

It's not a dungeon crawl like Space Hulk and it isn't a sneaking mission like Execution Force. And it's less complex, really than Betrayal at Calth (which isn't complex at all, just a touch point). It's pretty much just a straight-up skirmish with an outnumbered SM squad versus tons of baddies and some objectives. The rules are about as stripped down as they could possibly be. The  movement is really interesting because it is area to area, but when you move into an area, where you leave the piece is where it stands in terms of determining range. The size of the areas also determines the stacking limit- if they can't fit, they can't go. And there is a simple pinning rule- can't move out of an area if there are dudes in it with you. Other than that, standard shooting/fighting/armor save stuff and one little rule that allows you to jump across catwalks and gaps. Roll a 1, take a wound. Oops.

At first, I kind of thought there wasn't enough to it and Deathwatch seemed hugely OP (two attacks per turn, yikes). But it turned out to be really FUN, and there were some really close calls where a Purestrain Genestealer just wrecked a couple of guys and left the marines hanging by a thread. We did the first two scenarios and both were good, the first is just a "kill 25/kill 2" thing (hilariously called "Operation Killstorm" and the other finds Deathwatch trying to shut down a communications console (i.e. get four men to key points).

It's easy enough to bust out with just about anyone, I think. And it does this weird thing where it feels sort of halfway between a freeform "measuring tape" miniatures game and a board-bound skirmish.

It comes with A TON of models, so be warned. I think the model count is higher than for the other games. I felt like I was building Hybrids for days.

In other GW news, a set of the new Battle for Vedros starter, which is aimed at young kids, showed up today. It's a minor miracle that I got review material from GW, but I think they are kind of having a hard time communicating this product effectively and it was supposed to be this big foray into larger retail channels. Virtually no one is stocking it, it isn't available through the usual outlets, and coverage of it has been extremely limited. I can't find it at retail anywhere. Which is a shame, because it looks REALLY neat. Super-streamlined rules (literally two pages) and a classic Orks vs. Marines setup that kids will like. Both my girl and boy are excited to put them together (snap fit) and paint them up. So I'm going to be covering all of that, probably separately over the next couple of weeks.

Discuss this article
Log in to comment
Posts in discussion: Barnestorming- Animals on Board in Review, Descent RTL Round Table, Deathwatch: Overkill

hotseatgames replied the topic: #229290 23 Jun 2016 20:13
After being demoralized by Mantic dumping a large box of sprues on me from the Deadzone kickstarter (and yes I knew I'd have to assemble)... I really can't see me buying another assembly required game. As much as these sound great.

Sevej replied the topic: #229292 23 Jun 2016 20:41
I'm thinking hard about Death Watch, but I really can't justify the price. It's a very interesting game for me since it goes for the horde of enemies dynamics, which is pretty rare these days where monsters are mostly sword/arrow/bullet sponges.

I really enjoy assembling miniatures. I just assembled 5 Assault Space Marines (the old ones, since they match my other 15), each made of 10 parts.

metalface13 replied the topic: #229315 24 Jun 2016 11:00
Good to hear all these GW games are actually pretty fun. All I've heard about them from my minis channels is about the minis and using them/converting them for other purposes and very little about the actual games. Did you get Lost Patrol?