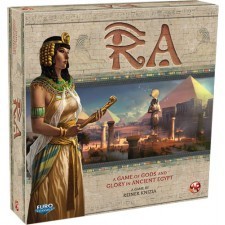 Wind Rider (ha ha!) has just put out that new edition of Ra as part of the Euro Classics line, which was almost certainly inspired by 2014's Eurogames Reclamation Project. It's a great-looking edition and once again they didn't mess with it so it becomes the de facto "best" issue of it yet. HOWEVER, it is effing expensive. $60 retail. There is nothing in this box that warrants that kind of price for what should be a $40 retail title. They took out the wooden sun disks, which is sad, but the new embossed board looks great and the Ra figure is cool. So it's a toss-up. If you don't have it, you can buy this one in confidence that you are getting a really great edition of one of the best games of the 1990s and one of the best auction games ever made. If you do have an older edition, I wouldn't upgrade it. If you want to cheap out, I still have an Uberplay copy for sale, $15.

Playing it again, and not long after a couple of plays of Medici and with Modern art, made me realize that pretty much all other auction games are irrelevant with maybe For Sale being the exception. If you have these three (or three +1) titles...you basically have the perfect collection of auction-centric design. Unless you want to count Dune, which features not one but TWO central auctions (the combat is an auction, for the record).

In other non-GW news...I also reviewed the Bespin Gambit wave for Imperial Assault, just like our own Matt Thrower. This will be the last time I cover any campaign-focused expansion for Imperial Assault. I've decided that I do not care one lick about board game campaigns that are more complex than what was offered in Mutant Chronicles. The whole Imperial Player thing exacerbates my distaste for this style of gameplay, because there is all of this structure, process and administration involved that does almost nothing to actually progress a storyline or establish development over time. Keeping a card from one game session to the next is not a "campaign". It's all part of this bullshit façade that tactical, hack and slash dungeon crawls are somehow competitive with actual RPGs.

So my two IA friends and I did the mini-campaign in Bespin and it was fun, but fun with a shrug. The whole time I was thinking how much more I would enjoy it if it were managed by a Road to Legend-style app and I wasn't playing the Imperial Player. When it was done, we all three agreed that we do not want more IA campaigns. I'd much rather see standalone, one-off missions that aren't skirmishes.

So kind of a shruggy 3 1/2 stars on it...I do really like the new content - Lando and Bossk are great, I like the Ugnaughts, lots of new skirmish stuff. Here's that one.

Now, back to GW land.

So I've actually been painting a lot more than playing lately, aside from Battleball and Sorry Sliders with the kids this week (a lot). I painted Lost Patrol, but it was a disaster. I got a bad prime on them, and I stupidly primed them all at once. So I threw the entire set into Simple Green and got about 80% of the fuzzy wuzzy Army Painter primer off (can discarded!). The Scouts did better in the stripping, the Genestealers had some trouble with all of the crevasses. I went with an Ultramarines color scheme for the Scouts and it turned out pretty good except for my shitty "shadow faces". The Genestealers look terrible. I wanted a more jungle-y look, so I did like a dirty bone look for the carapaces/exoskeletons and an olive green for the meaty parts. Purple tongues to call back to the classic Genestealer color. I _way_ overshaded them with ink, on one batch I used the wrong shade (strong tone instead of soft tone), and the details in spots were REALLY shallow from the priming fuck up. At a tabletop distance, they aren't too bad, up close they make me nauseous.

Most of Battle for Vedros is painted- Attack Bike, Wartrakk, the Deffkopta...just need to do a Sergeant and a Captain and that will be 100%. Pretty mixed bag- I think some of the pieces came out really good (for my skill level), some are a little sloppy. Mostly the Boyz, but a lot of them were kind of speed painted. I went with a Goff color scheme, which these days is brown and black. But I added red to it to call back to the classic 2nd edition Goffs I used to have.

I started on the assassins from Execution Force. As long as I don't suddenly try to paint outside of my skill level, they look really good. Going for a mostly black look with faint highlights and some color pops. I have the Vinidcaire done and the Callidus at about 90%. I think they are probably the best things I've done, but they are minimalist.

I'm thinking about working on some of Dreadfleet next, but it scares me. I don't know if I have the technique to really do justice them yet. I'm also leery on doing the Deathwatch marines, they're so distinct and personalized...and many have exposed faces. May wait for a while on those until I can move on from blobby faces.

Taking stock, I've got something like 75 paint pots, 21 brushes, two things of glue, two different sprue cutters, three packs of foliage tufts for the bases, hobby knives out the wazoo...I guess I'm really into this now. Not to mention that I literally have HUNDREDS of figures eligible for painting. But the one thing I've really taken away from all of this is that painting GW figures and in particular "hero" figures is WAY easier and more engaging than painting shitty FFG bubblegum figures.

Discuss this article
Log in to comment
Posts in discussion: Barnes on Games - Ra in Review, Bespin Gambit in Review, Barnes on Painting

We're doing Dreadfleet by committee. I'm not sure I'd want to tackle the whole game. Those ships are amazingly detailed.

EDIT: Also, your paint jobs look sharp to me...

Brewmiester replied the topic: #230669 22 Jul 2016 16:04
One thing you do want to be careful of when spray painting is the humidity. I've got a bunch of stuff I need to work on but it is WAY to humid here to spray anything.

Michael Barnes replied the topic: #230675 22 Jul 2016 16:39
Ha ha! That slick Ultramarines hoopty isn't mine...someone has stolen my name. This is like that time I was fined for having "Robofox" out at the video store, there was someone else named Michael Barnes.

I hear you Dave...I normally wouldn't post painting stuff in the weekly column, but...I didn't really have anything else this week! Maybe I'll talk more about Zimby Mojo next week...it's REALLY good.

Michael Barnes replied the topic: #230677 22 Jul 2016 16:42
On the humidity thing (sorry Dave)- yeah, I think that's what happened. GA humidity is about equivalent to Vietnam. I kind of wonder if it is the Army Painter rattle can too. I've had nothing but great results with P3 black spray (which has a different nozzle and a completely different coverage). The AP red and blue were both really good. But this white always seems problematic. I bought some (shh) white Painter's Touch and it did fine.

I actually prefer brush-on primer, which is not something I ever thought I would be saying. The little Vedros paint kit had a 3ml pot of Imperial Black primer and I _loved_ it. But then I bought a full-size pot and it wasn't nearly as good. That little pot went on like melted butter, it was crazy. I've been using a couple of Vallejo brush-ons too and having pretty good results with those as well.

I tend to go cheap-o and prime everything with the cheapest black spray paint I can find. Never had a problem with chipping or uneven results.

drewcula replied the topic: #230731 24 Jul 2016 09:57
I've purchased 18 cans of Army Painter primer since 2011.
I like 'em, but with exceptions.
PRO: 100% color match with AP paints. That is awesome and time saving and cannot be stressed enough.
CONS: Pricey. Small nozzle. Imported. 4 of my cans have had nozzles bust, and paint flew everywhere.

Context: Unless it's a colored primer for a large troop, I'm using WHITE primer. No black for me.

Da Bid Dabid replied the topic: #230734 24 Jul 2016 10:19
Man the metamorphosis (dare I say apotheosis?) from ERP to mini painter over the last few years has been very intriguing to observe. More so when paired with my decline in involvement with the hobby over that time-frame, mostly due to more limited time to allot not waning interest.

Back on topic: I have been only using Gesso primer for like 4 years now, and I don't see any reason to go back. However I am pretty much never painting a large block of similar troops, if I was I guess there may still be a case for spray primer.