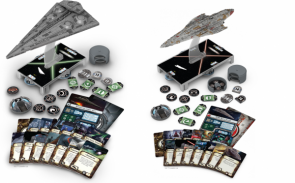 The Cadillac of Games is back with two new capital ships and a pair of flotillas. Armada continues to impress and I really like that this set of ships feels like an actual expansion when you look at them together. There are new concepts and more advanced tactics available. And oh man, they look awesome. I think the Interdictor and the Liberty might be the two best-looking ships they've done yet. I'm also really digging that FFG is bringing in more SW Rebels stuff...let alone the Interdictor, from the Thrawn trilogy. Here's the review.

A little game called Marrakech popped up at MM last week and I had forgotten all about it. I played it a few times five or six years ago and really liked it. It seems like something that would have gotten picked up by the Eurogames Reclamation Project, but I just didn't remember it. It's an adorable little game where you lay carpets out and move this little dude around and there are payments based on which carpet he lands on. So you spend the whole game overlaying other player's rugs to try have the most of your color on top. It's a really fun family game, designed by the guy that did Condotierre of all things. Review here.

A couple of weeks ago, Dan Thurot and I did another Head to Head like we did with Cuba Libre, this time for GMT's new COIN title Falling Sky. I gave it four stars because it is still an excellent, excellent system. But I didn't like this nearly as much as the five star Cuba Libre. I felt like the subject matter was a little more remote and it lacked the more tangible, relatable goals of the Cuban factions. Dan liked it a bit more as a COIN vet. Here's the review.

I've been poking around with Lord of the Ice Garden, the weirdo Polish game based on a Polish fantasy novel only available in Polish. It's OK. It is very much like Chaos in the Old World, more so than Blood Rage or Cthulhu Wars. At least to an extent. It's more complicated, mainly because there is a worker placement-style action selection mechanic on top of the unit actions, area control and other subsystems. It's just not a very refined, clean design. But it has such a weird, wild setting that there's something very appealing about it. Players are rogue Earth scientists that were sent to this planet, Midgaard, to study it. The planet is like Dark Ages Europe. So they went off the map after finding out that the "magic" was actually a resource called M-Factor, and started trying to take the place over. There's some neat stuff and the miniatures are way better than expected, but I'm  not sure why anyone would choose it over CITOW or the other options in this area. Review on this is next week.

I should also have Portal of Morth this weekend. Which I picked just because of the name.

Played a solo game of Deadzone last night, wanted to try the Veer-Myn that I had just gotten in. They are basically space Skaven- they use chemical weapons and rayguns and are rats, so there you go. They were up against Asterians, who are kind of bootleg Eldar but the concept is that most of their fighting forces are remote contolled robots- battle droids, basically. The box says that they are "haughty aliens".

Anyway, it was about 100 points and change on both sides.

So the mission was scouting, so there are two 1 point spots and two 2 point spots that you have to go out to and hold. You get points for those, and then points for any kills. I set up a little outpost with one 3 cube high tower and one 4 cube high one. A couple of walkways and general buildings. Barrels and crates here and there.

The rats are really fast, so on the first turn they moved out quickly- they rolled a couple of extra moves on the command dice so those Stalkers sprinted four each and took up cover. The crawlers went for high ground, but that left them perilously exposed. The models are small, and line of site is WYSIWG, so they have a little advantage by actually being smaller than other figures. The Asterians split into two groups, a melee and a ranged guy each going around two sides of the main building. The drone ambled out with the Overseer following. A couple of the Cyphers blew their one-use toxic smokescreen for cover.

Once in position, it started to go south pretty quick for the rats. I underestimated their shooting skill, which hits on a 3+ (on a D8). Their rifles are short range, but man, they don't miss. So one Crawler got picked off a bridge. The other returned fire and managed to do absolutely nothing. Then the Drone fired the Plasma Vortex, and literally blew the other crawler off a tower. It actually didn't do damage, but the blast threw him off and he fell.

The Stalkers simply had to go in close to try to get into melee or just to avoid getting shot. They took both 2 point spots in hopes of at least getting some points on the board. The Progenitor got up on the bridge to lob a couple of indirect shots, managing to blow one Cypher into a wall with those fun scatter rules. There's a big disadvantage fighting against Asterians- their constructs can't be pinned or knocked down, which s-u-c-k-s.

The Cyphers with the Charge Gloves moved in and the melee was on…they were pretty evenly matched by the Stalkers, so those fights went 1-1. The double drill nightmare moved in and just completely clobbered the other Cypher. But the day was carried by one of the Cyphers with the rifle and that drone, which managed to take down both the drill rat and the Progenitor, which meant no more command dice or "splat" abilities. So Asterians for the win.

Lessons learned- the rats just can't get out of cover, ever. They need to gang up and shoot a lot, and then get those melee units in a focused rush. The Asterians play like you'd expect a bunch of remote control robots to- you walk them in, they start shooting everything until something shoots them.

This game is super freakin' good. Easy to play, looks good, has lots of neat weapons and fun rules. It's a little hard to get around the "bootleg GW" feel it has, but really GW doesn't have a game quite like this. The closest analog would be Necromunda, really. Or even Mordheim.

I am completely in love with "big area" movement for miniatures…Deathwatch: Overkill has it too. You have the board/play area divided into large spaces, your movement is how many spaces you can move. Once you are in your destination space, you can set up anywhere in it- behind cover, so that it has LOS on another model, whatever. DW:O adds in measured range, but Deadzone counts range in cubes. But neither require measuring tape.

Discuss this article
Log in to comment
Posts in discussion: Barnes on Games - Armada Ships/Marrakesch/Falling Sky in Review, Lord of the Ice Garden, Deadzone

charlest replied the topic: #233390 06 Sep 2016 08:47
A guy in my group was very excited for Lords of the Ice Garden back when it came out, he imported it and my group played without me a couple of times. None of them really liked it and thought it was very pedestrian. Think the guy got rid of it.

metalface13 replied the topic: #233405 06 Sep 2016 11:30
We keep wavering back and forth on wether we're playing Necromunda or Deadzone next summer. The actual gameplay of Deadzone sounds more fun, fast and accessible than Necromunda, but Necromunda has the better campaign system with way more character to it.