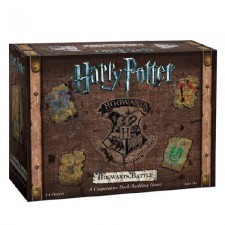 It's a head-to-head this week as Kyle Mann and I take on Harry Potter: Hogwarts Battle. The bottom line is that if you are a Potter fan, this is a must-play but it is also only a slightly above average deckbuilder with knockout production values. There's no doubt about it, this is a super fun package that plays out almost like a core set with six expansions- and surprises- as it gradually sort of unfolds over the course of a seven game campaign. The Harry Potter themes of friendship and cooperation against bigger-than-you threats  are strong and virtually everything in the books/films is represented. I told myself that if Luna Lovegood wasn't in the game, then it was going to be trash. But there she was. I still gave it 3 1/2 stars despite being pretty unremarkable design-wise, and because it is Potter it has moved into my "one deckbuilder other than Rune Age" slot.

I've also got a Buyer's Guide for Zombicide: Black Plague up. This is more of a commercial piece, obviously, and we're going to be running a few articles like this to help folks sort out what is worth buying and what is not. I just got the Deadeye Walkers which make the game suddenly quite hard. Definitely looking forward to seeing how this game works with Massive Darkness through the crossover kit.

In other news, I've been playing around with A Feast for Odin, the new Uwe Rosenberg thing. Good god. It's worker placement. WITH OVER 60 CHOICES to place your workers. And 16 punchboards worth of pieces.  I like it, I think it's far better than some of the other post-Agricola things he's done (like the insufferable Le Havre) but it just doesn't come to life quite like Agricola did. It's pretty typical buy/build/harvest/get better at all of the above stuff with a gigantic stack of occupation cards that give bonuses and so forth. There's a little dice rolling, although a cartoon picture of Rosenberg in the manual tells us that dice rolling in strategy games is frowned on for good reason. You get three rerolls to see if you pillage, raid or whale successfully. Whatever. There's a feeding thing where you have to supply stuff to the banquet, which is kind of neat, and there's investment/risk exploration and building. Lots of detail, lots to do. There's even an almanac that maps everything in the game to actual Viking history/culture. The problem I'm having with it is that what you actually do to win the game makes zero sense given the level of detail. Durable and luxury goods that you make get placed on this grid that controls your income and has -1 point spaces that you have to cover by the end of the game. If you build houses and explore distant lands, they have these grids too. More valuable goods cover more spaces. And then there are irregularly shaped treasures. It's almost like a tetris block inventory puzzle. So if you get the English crown, I guess it is this giant thing that takes up 8 or so blocks worth of storage on the Faroe Islands. I just don't really get how that makes sense with the rest of the game. But it's fun to play despite the piles and piles and piles of components and it's fat with long-term strategy gameplay.

Grand Prix is, as expected, really good. I'm not quite sure yet if I like it more than or less than Thunder Alley. The games are almost the same, but there are a few tweaks that make Grand Prix seem faster and the new NPC car rules give you a little more to do with fewer players (in case you can't table it with 11 players). I thought the emphasis on navigating corners and banks in open-wheel racing would feel different, but it kind of doesn't. I guess the next game the Horgers are doing is this system in a Car Wars/Autoduel style thing. Hell yes.

I have Planet Rush, a new Knizia game from VPG, but I haven't played it yet. Looks decent.

But above all, my game playing time lately is dominated by Pokémon. My kids have asked to play it every night for two weeks. They are starting to get the hang of combos...my son figured out why Blaistoise is awesome and he started using cards to get water energy in his hand to just load up on him. But then I played one that shorted out the target and did damage times the number of energy it has. We have an assortment of theme decks and about 400 cards from packs so I am trying to show them how to tweak the theme decks by taking out the junk cards and subbing in EXs and more useful trainer/supporter cards. I had never actually played it, I'm surprised at how enjoyable it is. There's some REALLY wack balance as is expected, but it seems like one player is on the ropes for most of the game and then there is a make-or-break point where the player either fights back and can win or they just get completely beat down. I'm mainly playing a heavily modified Rayquaza theme deck and it's been pretty decent...at least in our super casual home play environment.

Do you have an opinion about Core Worlds (speaking of deck-builders)?

Casual is the only way to go. I've been playing this with the spawn, teaching fundamentals of what balance means.
He is on this hyper power trip from yugioh cartoons, and this is showing him you don't need "the best card" in your deck to win.
The precon decks are the best route, after going through some of the fat packs they offer to supplement them in a minor way.

It really is a decent enough game, and fun.

Matt Thrower replied the topic: #236740 24 Oct 2016 04:27
Hogwarts Battle is inexplicable not available in the UK, where the author lives and where the books are set, and it's really yanking my chain. My whole family would love to play it.
Read More...