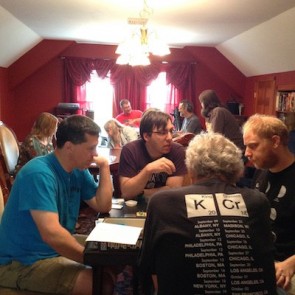 I hosted our game group's Saturday game day for the first time since the fire. Francie Pants finally kicked me in the tush and made it happen. This kick also forced us to deal with finally getting the big-ass table up to the game room. Fortunately Joey Joe Joe the drummer stopped by Wednesday as Engineer Al and I were puzzling over how to get this table up two flights of switch-back stairs, and declared that that it would be a piece of cake compared to hauling around 90 inch TVs, which is something he does on the regular as an AV guy. With his direction, he and Al were able to man handle it into the game room in a matter of minutes. So as a bonus to playing games on Saturday, we are now seriously on our way to finally converting my home office from a store room back to an office.

We had about 12 of us to play games on Saturday, which is probably the perfect number for a home hosted game day. We easily had three or four games going all day, so everyone got to play what they enjoyed, and, most importantly, I never got sucked into a godawful euro-cube-salad-spreadsheet-game. At one point, we over heard someone at the next table say, "I'm trading a blue cube and a green cube for a yellow cube, and the yellow cube and another green a red cube. So here's a blue and two greens for a red." Al, Repoman and I burst out laughing. The fourth guy at our table had no clue why we were laughing, and we didn't bother to explain because he was a new guy, and we didn't know if maybe he really liked cube salad, and it's not nice to yuck on someone else yum. I just told him there was a "Blue Cube Incident" and you had to be there. In retrospect that may have not been the best idea, because we may have to keep up the pretense of the "Blue Cube Incident" going forward just to be polite.

I started the day by playing Spurs with Repoman and Engineer Al. Spurs in my new crush.  I am in love with this cowboy themed adventure game. The best I can describe it is it's like a streamlined cowboy themed Runebound. This description pretty much scares off nearly everyone, but those that have decided to play with me are clearly the type that like this style of game and we have had a blast. I've played it four times in two weeks and haven't won once. This losing streak continued on Saturday. Since it was a cowboy game, we felt it required being kicked off with a round of Bulleit: Frontier Bourbon  shots. It being only 11am, this may not have been the best choice for Repo and I. Engineer Al kicked our asses, winning the game before Repoman could score his first point. I managed to score two points by robbing the bank with a Gatling gun. I just sauntered into town with an Elk skin and a gold nugget. Traded them in at the General Store for that big-ass gun, and easy as you please, rolled it up to the bank and shot the hell out of it. My only disappointment was that the game ended before I got a chance to try and rob the train.

Repoman overcame his humiliating defeat in Spurs with a Glory to Rome win. Glory to Rome is just such a great game. We used to play it rather frequently, but over the past few years it has been forgotten as we have been distracted with every new and shiny game brought to the table. We concluded that Glory to Rome will be played more often going forward. We also concluded that despite the ugly cartoony illustrations, the brightly colored older version is actually graphically much easier to play than the newer fancy, and ill fated, Black Box Edition, which is also ugly in a whole different way.

We flung some monkey poo with Coconuts to kill some time while waiting for lunch to be delivered. After lunch we played a 5 player Lords of Waterdeep with all the expansions including the little meeples, and the Broken Token metal coins. The thing about Waterdeep is that despite not being my most favorite game, no matter how much time elapses between playing it, I remember the rules effortlessly, and so does pretty much everyone else. That clearly says something about how well crafted Lords of Waterdeep is. Also the metal Broken Token metal coins are absolutely gorgeous. I would never play $50 for them, but I am glad I have a gamer friend who did.

We finished of the day with a 5 player game of Mare Nostrum. I am so happy that the new edition has gotten people excited about playing this again. For years, I had been entirely unsuccessful at convincing any one to play Mare Nostrum with me. I'm not sure whether it's cult of the new, the upgraded bits, or the redesign tweaks, but Mare Nostrum  has been getting regular play among several members of our local gaming community who wouldn't have even considered playing it a year ago.

If your interested in discussing any of the games I've mentioned, or hosting a game day, or moving big-ass furniture, the proper etiquette for mocking cube-pushers,  or tasty bourbons to pair with games, please leave a comment. I'm sure someone on the Fort will answer with an opinion about it.

Colorcrayons wrote: So what is the proper etiquette for mocking cube pushers?

Mostly, I just roll close my eyes and think of England.

aaxiom replied the topic: #255740 15 Oct 2017 14:48
It's not exactly clear which version of Mare Nostrum you have... is it the older one? I really enjoy the older one with the expansion and the modified rules, but don't think I need the newer one. Thoughts?

engineer Al wrote: From this point on, two shots of bourbon at 11am on a Saturday will be known as a "Jeff Luce Breakfast."

aaxiom wrote: It's not exactly clear which version of Mare Nostrum you have... is it the older one? I really enjoy the older one with the expansion and the modified rules, but don't think I need the newer one. Thoughts?

I have not played the older one so I can't directly comment, but judging from some other's comments in past plays of mine with the new version - they really appreciated some of the changes, particularly the trade portion where it restricts your choices to a pool of tokens. This means you can't choose the same number over and over.

san il defanso replied the topic: #255789 16 Oct 2017 13:10
One of my great F:AT goals is to someday play a game with this group, if they'd have me. You all sound like you're playing games for the right reasons, which is altogether too rare these days.

Unfortunately the possibility is almost totally academic, since I can't seem to stay in a single place for longer than a year or so.
Read More...