I Love the Arkham Horror Universe 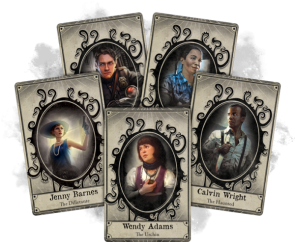 Arkham Horror is it's own universe, inspired by, but distinct from the Lovecraft Universe.

The main characters in this Universe are the investigators, not the monsters. We create their adventures as we move from game to game in which they repeatedly appear. I like these characters, and I like the Arkham Horror Universe. I probably like it the same way other people like the Star Wars Universe, or the Warhammer 40k Universe.

I know this world. The layout of the town. The people in it. I know it so well, that I can imagine it surrounding the house in Mansions of Madness.  I know where the cards laid out in Arkham Horror: The Card Game would be on a greater map of the town. When my investigator in Eldritch Horror visits Arkham, I know she will be staying at Ma's boarding house, and maybe getting a drink over at Hibb's.

So while others may moan, "Not another Cthulhu game," or complain that some game in the Arkham Horror Universe isn't "Lovecraftian" enough, I say bring it on. Like a new book in a favorite series, I can't wait to see what new adventures are in store for my favorite investigators.

I think the reason people react is because it's attached to the very specific lovecraft name. Part of me feels like it would have been way better off being attached to some generic pulp horror vibe (would also jettison the ick racism Lovecraft association), but obviously the lovecraft stuff is what brought people on board initially...

Shellhead replied the topic: #279055 02 Aug 2018 16:26
The Cthulhu Mythos offers a rich setting, but a game strictly based on Lovecraft's stories wouldn't be much fun. A real Lovecraftian game would be solitaire and slow-paced for the most of the game. The endgame would be brief, violent and impossible to win. The End.

Shellhead replied the topic: #279056 02 Aug 2018 16:33
Another major difference between Lovecraft's stories and the Arkham Horror universe would be the scope of the setting. The world was a very interesting place in the 1920s. America had Prohibition and gangsters and early Hollywood. The world was recovering from a world war and a global flu epidemic. There were still many uncivilized locations that had barely been explored. Technology was ramping up, and jazz was a big deal. Lovecraft didn't care about most of that stuff. He was more interested in colonial New England and his own vivid nightmares. Arkham Horror offers the chance to play exciting characters like a gangster or a private eye or a flapper, but Lovecraft's characters were mostly quiet, bookish introverts.

Yes, Arkham Horror is very much an exciting and romanticized version of the 1920's. Flappers and bootleggers, heiresses and jazz musicians. So many exotic, unexplored places. Plus magic, and mysteries and monsters.

Motorik replied the topic: #279058 02 Aug 2018 17:01
The Lovecraftian aspect has little to do with what I like about the AH/EH setting. For me it's about the dark, pulpy, Sax Rohmer-y 1920s aesthetic. They could be fighting opium traffickers, the KKK or Capone's gang for all I care, with nary an ancient one in sight.

I feel that is especially true of Eldritch Horror. It's also why Eldritch Horror hasn't replaced Arkham Horror for me. AH is more mystical and creepy than EH. In AH I feel like the investigators are delving into arcane lore and the monsters and the influence of the GOOs feel more present. In EH the investigators are jetting around the world and may just as well be trying to find clues to bust up the opium trade as searching for clues to prevent ancient ones from destroying the world.

dysjunct replied the topic: #279069 03 Aug 2018 00:22
For all that I’m pretty over the pop-Cthulhu thing, I can get behind this. I was pretty tickled when I first opened Arkham Horror and saw that Harvey Walters was a playable character. He was an iconic NPC in CoC that was used in the examples in the text. He was kind of hapless but undaunted. He danced at a fancy ball, then went to a castle, saw a byakhee, and went temporarily insane. Not a bad career.

Michael Barnes replied the topic: #279070 03 Aug 2018 00:28
In EH the investigators are jetting around the world and may just as well be trying to find clues to bust up the opium trade

I would much rather play The French Connection: The Board Game, really.

SuperflyPete replied the topic: #279072 03 Aug 2018 01:55
I agree. I like the setting and themes. Lifelong Lovecraft fan. I’ve bought more of this genre than almost any other. I don’t think it’s an untoward criticism to wish my games had a more closely tied theme and setting with mechanics that are intuitive and integral to the theme and setting.

The setting is fairly well fleshed out, as one might expect from decades long work by Chaosium.

I played a couple Arkham related titles, and really obsessed over Call of Cthulhu LCG for a few years. I think even the card game was evocative and did a lot of justice to pulp horror.

I'll echo Shellhead's sentiments regarding the glamorization of that era. It's was the tail end of the age of discovery where there was still room to not be cynical.

Call of Cthulhu already had Cthulhu by Gaslight (1880s England), modern times, and the Dreamlands back when Arkham Horror 1st edition came out. Call of Cthulhu is now on its 7th edition, and includes settings where you can play during the Roman Empire, the Dark Ages, the Third Reich, or an apocalyptic future. I was really hoping for a big box Dreamlands expansion for Arkham Horror. Instead there was a very disappointing Dreamlands expansion for Eldritch Horror.

The Horror Adventure Game set in the 1800's that I would like to see is a Penney Dreadful board game. That could be awesome.

The Horror Adventure Game set in the 1800's that I would like to see is a Penney Dreadful board game. That could be awesome.

drewcula replied the topic: #279276 05 Aug 2018 20:46
Fool me once, shame on you. Fool me twice, shame on me.
I pissed away hours of my life reading seven (!) FFG Arkham Horror novels. As a glutton for punishment, I'm half tempted to finish the remaining two (?). Regardless, the books are total rubbish. Any connectivity a gamer may generate from a handful of text on playing cards, and an illustration is jeopardized by reading this tripe. Proceed with caution and prepare for a D20 san loss.
Read More...