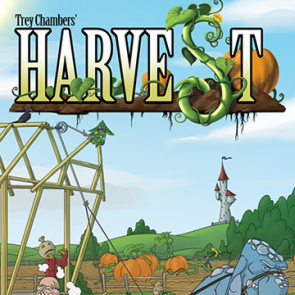 The fine folks at Tasty Minstrel games sent over a package of some of their most recent titles so let's have a look at Harvest, Exodus Fleet, and Pioneer Days, shall we?

This game made a terrible first impression on me because it has a "poop" meeple. I do not like poop, I do not find poop funny as apparently many people do, and I generally eschew anything where poop is featured. Longtime readers will remember my near-allergic reaction to the infamous Los Mampfos, a game about crapping donkeys. I stuck with this small box title, designed by Trey Chambers, and I'm mostly glad I did because it's a reasonably charming farm game that manages to somehow remind me of Agricola, Stardew Valley, and Zooloretto in equal measure.

So that's a pretty good pedigree, and if you are familiar with at least two out of three of those items then you'll have a basic idea of what goes on here. You'll take on the role of a fantasy farmer (yep, each with a special advantage) tasked with cultivating a plot of land and bringing your crop to fruition. But you've got to spend harvested crops to pay for operating and development costs, so over the course of this ten turn, 30-45 minute game you've got to balance profit with growth. Along the way, you'll have to pick up resources (such as "fertilizer"), expand your fields, and buy bonus buildings. The simplistic worker placement chassis is driven by an initiative card system that provides decision points between earning bonuses and getting to place your two workers earlier in the turn. The usual worker placement elements are all here, including the passive-aggressive blocking of limited actions. Leveraging the bonuses or advantages afforded by various sources is key to mitigating restriction.

But Harvest is a much lighter game than is usual in this design space, and I've found that the short playtime and contained scope- as compared to many "kitchen sink" worker placement games- make the somewhat redundant and overworked design tropes more palatable. The fantasy aspect is somewhat irrelevant, but may appeal to those who for some reason still think games about farming are boring. I thought we cleared that up back in '97 when Bohnanza made bean farming chic.

There's a simple pleasure to be had in buying seeds, watering them, and converting them to full grown crops, and Harvest understands that general impetus common in agriculturally-themed designs. I like spending the harvest to improve outputs in subsequent turns, and there's a nice through line over the course of this brief, fairly simple game. It isn't going to change the way we game, and it's a frivolous design to put it charitably. But it does present a pleasant feedback loop with concrete objectives and outcomes in a low cost, compact package and that is where this game stakes out its patch of land in a crowded field. 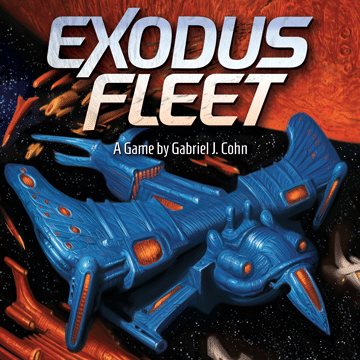 My rulebook impression of Exodus Fleet was that this Gabriel Cohn design was going to go down something like a cross between Puerto Rico and Race for the Galaxy- two games that are clearly along the same action selection lineage. And in fact, there is definitely some DNA from those two predecessors in this fairly complex resource management design. The concept is that players are tasked with getting "tribes" off of Earth and out into the great unknown of space, performing the titular exodus on the titular fleets, up and away from the devastated planet. To do so, you'll have to marshal a variety of resources to develop an economy and most importantly, provide cargo space for everything by purchasing ships and expanding your caravan.

Each turn, a lead player (the Admiral) selects one of a variety of actions. All players then bid XUs (we call 'em "space bucks" or "star ducats") to participate in the chosen action. It's a once around, all bids unique auction with the low bid excluded and provided with a consolation prize of 4 XUs and a resource of choice. Then everyone performs the action in priority order with the higher bids generally getting the stronger effects.

Among these actions, you may find yourself mining a planet for resources, building ships and increasing your income as well as capacity, taking an income payout, exploring for special action cards, or transporting tribes to your vessels. It's kind of interesting (as it is in Race for the Galaxy) that you are to some degree at the mercy of other players' choices, and must often make due or reassess plans based upon the actions chosen. It's scored at intervals based on the number of players, and you can expect this 2-5 player game to go about 90 minutes. It's definitely one to play with 4-5 if you can manage it.

This is a decent game, but I think it struggles in comparison to better games in its class. It's somewhat overcomplicated by a dizzying array of ship options- most of which have special phase-specific advantages, discounts, or effects. There's a lot of numbers involved, with each planet supplying 4 resources and most ships requiring at least two to four of the types. One look at the game laid out on a table, with ever-expanding player tableaus, market rows, and various other components and it's clear that this is a heavier game than you might expect.

But I'm not sure the heaviness is equivalent to depth. Like many modern designs, it seems as if variety and scope are conflated with strategic significance and weight. Complex games needn't offer players an overwhelming smorgasboard of choices, an array of functionally similar resources, and a mountain of unique cards. These things, quite often, lead to a game that is more complicated than complex, and Exodus Fleet threatens to sink into this particular design quagmire.

However, the core system is fairly sound - mainly because it is built upon rock-solid mechanical foundations from previous designs - and there is a satisfying quality to developing your fleet and increasing your ability to get the little purple guys and gals off the planet. But I'm not sure that I would reach for it over other choices in the tableau-building genre. 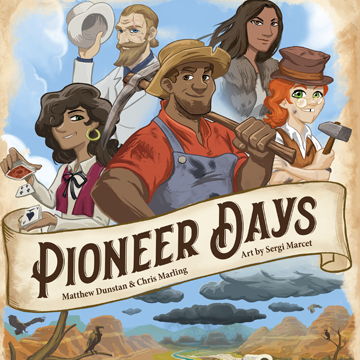 I noticed an Oregon Trail game on the shelf of Target the other day, and since I had just recently played a few games of Matthew Dunstan and Chris Marling's Pioneer Days my reaction to it was "that can't be better than Pioneer Days". Indeed, this quite excellent dice-drafting game is more or less an Oregon Trail game. Right down to everyone dying of disease.

But first and foremost, I want to point out how much I appreciate the very inclusive, very diverse range of characters represented in the game. Sure, it's ostensibly set during the genocidal "Manifest Destiny" phase of American History when white supremacy headed West, but in this version all skin colors, genders, and ages are taking part in the pioneering. Sure, you could argue that it avoids the reality of the issue, but you've got to remember that this is a family game that is effectively reclaiming the narrative for everyone to play with and enjoy.

The goal of the game is to spend four weeks leading your wagon train - which will become laden with supplies, get damaged, and accompanied by folks you pick up along the way - out West to fame and fortune. Along the way, you'll also have a chance to mine for gold, fend off bandits, drive cattle, heal the sick, and visit small towns and fulfill their needs on your journey across the "Victory Trail". Or you might get robbed, watch your companions die of illness, or be forced to drive a weather-battered wagon with nary a friendly Beaver around to help you fetch wood to fix it. The beaver is really in the game, by the way. There is a lot of fun narrative in this design, and it is one of those games that manages to pack in a lot of story without relying on flavor text and illustrations to get it across.

Every week is five days, and each day is a round of rolling dice and selecting the actions indicated. There are options for each result, and at the end of selection whichever color die is left is the one that advances one of the four disaster tracks. Or, if it's black, they all go up. You use the actions to perform all of the core game functions, including taking income, acquiring equipment, recruiting townsfolk, and gathering resources (wood, medicine, and cattle). The die rolls also key to symbols on any equipment your wagons are carrying, and may generate additional benefits such as immunities to disasters and extra resources.

There's a lot to consider, and there's never enough money, space on the wagon, days left in the week, or dice in the draft to do it all. So despite its cheerful, very family-friendly demeanor, Pioneer Days is actually a pretty brutal and ruthless game. You've got to make hard decisions when the medicine is running low and you've got to watch some of your fellows die- thus losing whatever special benefits they confer. You might be forced to deal with the consequences of a raid, leaving you cash-poor and later facing a decision to take an income die at the risk of advancing a disaster. Face it Jake - it's Oregon Trail.

Interaction is pretty limited so all of that bad stuff is sort of procedurally generated by the game aside from the occasional hate-draft, but I think the storyline and the fun of contending with these tough choices and worst-case scenario events and making it through thick and thin makes up for that. I really like how each of the interim towns you reach at the end of a week have demands that you can fill for VPs or bonuses- there's a sense of short-term and long-term goals that are satisfying to achieve. At around 45-60 minutes, the arc is just right and both its length and weight lend itself well to a weeknight family session.

Next time: Knizia and Cathala...

Quozl- more like 6 on Exodus Fleet, 7 on Harvest, and 8 on Pioneer Days. My kids in particular have really loved Pioneer Days. It’s very fun to play.
Read More...