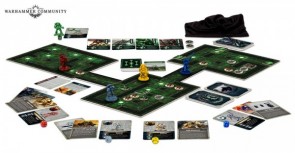 There Will Be Games
You know, for kids.

When Games Workshop released The Horus Heresy: Betrayal at Calth and followed up soon afterwards with Warhammer Quest: Silver Tower, the New Golden Age of GW had begun. Changes in leadership, a more accommodating attitude toward the hobby community, and a drive toward accessibility have all helped the Nottingham company not only remain relevant, but also vital. That last item there - accessibility - has been a particularly important element not only for inviting newcomers but also for creating a greater sense of access into one of the best settings hobby gaming has ever had.

But even if you have long marinated in the Grimdark or fondly remember The World that Was, this new drive toward approachability has borne fruit in terms of modern, updated designs not only in their flagship game systems, but also in many one-off releases. Nowhere is this more evident than in two of the three Barnes and Noble exclusive titles they've recently published, Space Marine Adventures: Labyrinth of the Necron and Blitz Bowl. These two games can be had for $50 each, less if you have a coupon. The third is a Lord of the Rings game that I've not yet had a chance to play.

Space Marine Adventures is almost like a family game version of Space Hulk, albeit with co-op gameplay against an automated opponent. It plays something like a cross between a dungeon crawl and Pandemic. This is one of the leanest designs GW has ever released- it's minimal to the point where the Necron adversaries don't even have an actual attack. They spawn through an event card deck, and if they spawn somewhere that a Necron token already occupies, it spills over into adjacent spaces. If a Marine is in a spot where a Necron is supposed to go, they take a wound.

Some may chafe at that degree of streamlining, but it works. So too does the simplified combat (roll a D6, get over a target armor number) and the flavorful one-shot cards that each Marine is equipped at the start of a game. The objectives are likewise impacted by this ruthlessly editorial design- The marines need to flip a switch to deactivate barriers to find the exit, and on harder levels they may have to dispatch a Lychguard or Overlord before proceeding.

Tension grows over the course of a 20-30 minute single game or an optional (and recommended) three game mini-campaign playable in a single session. The Marines are playing against time and an eventually overwhelming foe. Expect to reconnect back to the basic "I needed to roll a six but got a five" sense of drama. Event cards bring in elements like Mindshackle Scarabs and Reanimation Protocols to spice things up, and each Marine belongs to a different chapter and has specific cards that bring out the essential character of the flamer-wielding Salamanders, the savage Space Wolves, and the leadership of the Ultramarines.

It's a neat game. Kids will love it because it is immediate, exciting, and cool. And it make even cause some of them to wander into the larger Warhammer universe.

Blitz Bowl is designed by James Hewitt, who has been behind several games of the New Golden Age of GW including the 2016 return of Blood Bowl. Whereas Space Marine Adventures is a new, modern design leveraging the 40k setting, Blitz Bowl is a willful reduction of the latest edition of Blood Bowl. But like Space Marine Adventures is also lean and reductive, boldly trimming away fat and bulk to arrive a refined core. If you, like me, felt that the 2016 Blood Bowl was fun but perhaps a little long in the tooth in terms of design and you would prefer a Warhammer sports game that doesn't require you to developing a roster and playing a season to get the most out of it, then Blitz Bowl is what we were looking for.

It's somewhat more hobby-weighted in terms of rules- but fear not newbie, there is a set of practice drill cards that act as a kind of tutorial if you need it. The complexity falls somewhere between Blood Bowl and the classic Milton Bradley game Battleball. The more extensive season-oriented rules for coaches, cheerleaders, star players and so forth are eliminated as are inducements. Teams are smaller, as is the pitch. Keywords and modifiers are more limited. And there is no turnover when your lineman can't pick up the god damn ball. $%@#$ Nuffle.

At first, I grimaced at that last omission in particular because part of what makes Blood Bowl so much fun is weighing the risk of essentially losing the rest of your turn to make a play and having to work out the tactical puzzle of mitigating that risk. But when the game is somewhere around 30-45 minutes and it offers almost all of the body-slamming on-the-pitch action, I accepted the trade-off. Especially since I can now play a Warhammer sports game with my eight year old son.

There is one major element that is new, and I suspect it might be controversial with Blood Bowl purists. But here again, this is a more modern design so the achievement-like Challenge Cards make perfect sense. This is a display of cards that can be claimed if you meet the stated requirement (down a player, score a goal, and so on). They give you points, and they also flip over to give you a special action or advantage once you've earned them. They introduce some fun narrative and surprise twists (a second ball on the field!) while also giving players objectives beyond hiking the ball downfield.

This is another piece of this redesign that I was skeptical about. I mean, a sports game shouldn't have VP cards. It should be about scoring points per the standard rules, am I right? Does it make sense to get points just for having two players in an endzone or whatever? The answer is that it does not matter because the degree of abstraction serves the game well and gives a sense of assessing the total performance of a player's team- not just in how many goals were scored. You are graded, in a sense, on how well you met these short term objectives as well as how many goals you earned. Maybe some folks aren't on board with that, but it has worked for me. The pushing, shoving, kicking-them-while-down gameplay is still here- you just might get an extra VP for nailing that Hail Mary pass.

These games are especially valuable for families and children. Kids aren't going to complain about missing rules, missing details, or even the fact that the Necron are just tokens and not models. They aren't going to make insufferable gatekeeping comments about "spoon feeding" or "dumbing down". They are just going to get stuck in with these fun, exciting games and enjoy the great setting and stories they create. These are the kinds of games that make kids want to engage with hobby games, and they also happen to be fun and interesting designs that adults can enjoy as well.

Discuss this article
Log in to comment
Posts in discussion: Barnes on Games #4 - Space Marine Adventures and Blitz Bowl

Does it feel completely different? Or is it a sports version of SS?

But if I can find it on clearance, I'll buy it for the spawnling.

The real bonus, is it has a ready made expansion inside. This was a good move by GW for a lot of reasons.

They don't have to make an SKU just for a blitz bowl expansion.

7 potential teams (or an 8th if you get this months White dwarf) means the game doesn't have to be successful in order to be expanded.

I just got a couple more teams today, and hope to fill in the rest soon. I imagine even if Blitz Bowl doesn't get card support for undead, halflings, nurgle, etc. that it won't matter. I think I'd be happy with the present selection. And if not, then Blitz Bowl will act as a true gateway game of old, and pull me into Blood Bowl. (Not likely, but within the realm of possibility)

And unavailable in most of the world

Your enthusiasm and description made me want to pick this up but I can't purchase it from anywhere in the UK! There seem to be German copies distributed in Germany but only Barnes and Nobles (who don't ship to the UK) received English copies. I hope this is a temporary thing but I'm guessing this is a Barnes and Nobles exclusive for the foreseeable future.

100% agree.
As Barnes said, Blood Bowl sucks as a one-off, non-league-competitive game. But I can whip out Blitz Bowl with basically anyone (non-gamer friends, wife, county sheriff) and have a good time. Even the The weird point-gathering Challenge Cards actually work perfectly within the confines of this game.

And unavailable in most of the world

Your enthusiasm and description made me want to pick this up but I can't purchase it from anywhere in the UK! There seem to be German copies distributed in Germany but only Barnes and Nobles (who don't ship to the UK) received English copies. I hope this is a temporary thing but I'm guessing this is a Barnes and Nobles exclusive for the foreseeable future.

This makes me want to be game mule a for our English speaking European friends.

I recall Matt Thrower lamenting this as well.

The problem is shipping costs. As always.

If anyone has any good suggestions, I'm all ears and would like to help. This game is worth the effort, IMO.
Read More...