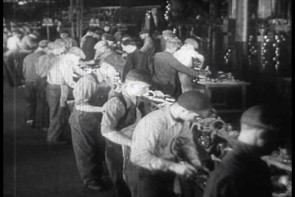 There Will Be Games
Howdy there, underlings! Go ahead and put down your tools, wipe the soot off your brow, and come hither. Your deep-pocketed, hard-fisted supervisor has some thoughts about board games, and guess what? You’re gonna listen to ‘em. You will, of course, need to make this time up later.

I’ve spent the last month or so having a bit of a love affair with the games of Ryan Laukat. Laukat is one of gaming’s few true auteurs, a polymath who handles the lion’s share of nearly every aspect of his games’ production: game design, graphic design, writing, and art. While he does work with a few contributors here and there, his games bear the unmistakable imprint of a singular vision--a rarity in this largely collaborative medium.

So, for my patent-pending OSR (One Song Review), I’ll be looking at two of Laukat’s games through the prism of famous musical auteurs and ask the question: Does genius love company? Or does it need it at all?

Laukat’s games have a reputation for a few things: a sort of homespun cheeriness and an ability to mash up well-trod board gaming mechanics into something that feels, well, new.

Artifacts, Inc. certainly delivers on the friendliness front. Players run competing archaeology companies seeking to capitalize on the antiquities boom of the early 20th century by digging up artifacts and selling them to museums for profit and reputation. Laukat’s art style, which stays pretty consistent from game to game, is a perfect fit for this era. His snowy vistas, sandy canyons, and charming storefronts look like posters that might hang in a period-appropriate travel agency, pushing aside any sense of violence, colonial conquest, or other such unpleasantness in favor of dashing explorers and exotic locales.

This gee-golly optimism extends into the gameplay, as well. Artifacts, Inc. lays out a veritable buffet of popular mechanics, serving up helpings of worker placement, dice rolling, and tableau building onto one messy plate. Players take turns sending out their explorers (dice) to do things like scout a new expedition, sell off a few fossils, purchase a sweet seaplane, or dive for sunken treasure. While it’s all a bit busy, there’s no doubt the different flavors taste good together.

What surprised me is how damn forgiving this game is. A surplus of beneficial actions means that you’re never hampered too badly by a poor dice roll, and while there are occasional squabbles over a card or museum order, competition with your rival companies never escalates above a mild simmer.

Artifacts, Inc. provides the gentle brain buzz of a good engine builder, as your little empire expands and you start stripping countries of their history wholesale. It’s good (mostly) wholesome fun, but the lack of tension with other players keeps it from dethroning its meaner cousins.

OSR: “With My Face on the Floor” by Emitt Rhodes. This pleasing slice of Beatlesque pop-rock showcases the many talents of singer / songwriter / multi-instrumentalist Rhodes, who recorded every note of his 1970 debut album by himself. It’s a rewarding listen, but as good as it sounds, it still feels like an imitation of something more vital and original--a love letter to musical heroes rather than the emergence of an important new voice.

Laukat’s breakout hit marries two genres that ordinarily wouldn’t be seen in the same room together: the resource-hoarding Euro efficiency game and the fluff-heavy, narratively ambitious gamebook. What’s remarkable about Above and Below isn’t just that these things can peacefully coexist, but that after a few turns, shifting between these modes starts to actually feel natural.

The game creates its own rewarding rhythm. Some turns are spent hiring workers, constructing buildings, and harvesting resources--all things you’ve done a hundred times before in other games. It’s executed well but does little to distinguish itself from the pack. Then, there are other turns where you take these same workers and plunge them into an expansive underworld, making narrative choices and reading text aloud to each other. Again, nothing particularly new here. But while these mechanics would never turn heads on their own, in concert with each other they become this new, potent thing.

It turns out that our brains like mixing things up (well, at least this brain does). I expected the switch from regimented problem-solving to narrative exploration to be jarring. Instead, in the same way that mixing a dollop of comedy into our drama can add depth to a story, these two disparate halves heighten each other--the narrative provides a human element to the puzzle, and the puzzle gives the narrative mechanical weight.

As with any experiment, it’s not a flawless experience--there is occasionally some awkwardness in the way the story book and Euro game elements intersect. It can be disappointing to have a careful plan turned on its head because of a bit of text chosen by dice roll. In addition, a strategy that relies heavily on questing--the most overtly exciting part of the game--can be less viable than a comparatively dreary (but safe) strategy of careful construction and resource management. It’s not seamless, and folks who dislike randomness will likely have a terrible time. But for me, Above and Below is an ambitious gem that speaks to Laukat’s unique sensibility and underscores that he is a designer to watch.

OSR: “Soft and Wet” by Prince. For You, the great one’s debut album, was essentially a one-man show--it’s purported that he arranged and played everything himself (no mean feat). The album delivers an electric, highly digable mix of funk and R&B. With any other artist you might think that this display of virtuosity would be a career highlight, but with the benefit of hindsight we can see it’s just Prince stretching his muscles--his best is still yet to come.

Well, nighttime’s rolling in and I suppose it’s time to wrap it up. But do stay tuned for more (mandatory) Laukat talk--we haven’t even looked at some of his grander, more epic-scale designs. There’ll be time for that later. Now, back to work!
There Will Be Games

Michael Barnes replied the topic: #282721 04 Oct 2018 19:43
"For You" is a good record, it kind of gets short shrift because you move the needle up one year and you get an album that starts off with "I Wanna Be Your Lover", which is just about a perfect song as has ever been written. It's easy to forget the lesser Prince because the better Prince is so fucking transcendent. If you go through some of that late 90s/early 2000s stuff for example, there are a lot of killer tracks that barely register on any "best of Prince" list. The sheer volume of music is one thing, but the relatively consistent high quality of his catalog makes it where it seems like the gulf between "For You" and "Purple Rain" is broader than it seems. Right now, my big Prince jam is "Electric Chair" from the mostly panned Batman album. Yeah, "Batdance" is really stupid. But there are some great Prince numbers on that record too. The other one is "P Control". Only Prince could pull that one off.

Michael Barnes wrote: The sheer volume of music is one thing, but the relatively consistent high quality of his catalog makes it where it seems like the gulf between "For You" and "Purple Rain" is broader than it seems.

Totally--if For You was made by anyone else we would talk about it a whole lot more.
Read More...