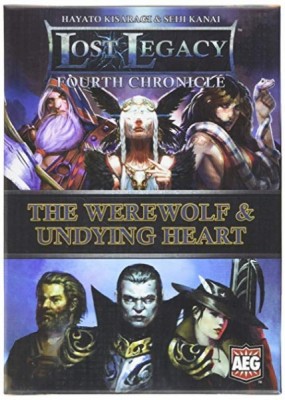 There Will Be Games
It just wasn’t in the Cards.

In this episode of Discount Dive, we hit on a couple of card games that were on the cut. What could possibly go wrong with a simple card game?

The first one was an easy decision; it sported the AEG logo and was developed by the mastermind behind Love Letter: Seiji Kanai. Lost Legacy: The Fourth Chronicle The Werewolf and Undying Heart is actually two games included in one box, both part of the Lost Legacy series. It even brags that they can be combined together to up the supported number of players from 4 to 6. Discounted to a measly $3.00, I figured I would take the risk. Whatever Lightning in a bottle that Love Letter captured is released in Lost Legacy with a resounding “Brraaappp!” It seems simple enough: Draw a card, play one of the two cards in your hand, resolve the effect of the card you played. The goal is to deduce where the Lost Legacy card is at the end of the game. So, it’s memory and deduction…and player elimination…and if no one finds the Lost Legacy, nobody wins?! Unless you are playing with another Lost Legacy deck that tells you you tally up the numbers on the cards and whoever has the highest score… What a convoluted mess. The pages in your instruction manual probably shouldn’t outnumber the actual cards in the game. And since we want all of these Lost Legacy titles to work with each other, include some slapdash rules to make that happen. The best part of Lost Legacy is that it comes with some nice cubes that are supposed to be for scoring each player win. These can actually be used in another game, one that might even be enjoyable.

The second game is Fairy Tale something or another (Editor’s note: The game name is Rumpelstiltskin, but since the placeholder text from when I couldn’t remember it was so ironic, I decided to keep it). Packaged in a simple playing card deck, I took the plunge for a whopping $1.00. I’d love to tell you how to play this game but it literally came with no instructions. Instead, it has a link to a webpage that, surprise surprise, no longer exists. So, I guess it is a deduction game where you spend your time on the internet trying to track down how to play it. Actually, from what I could tell from the cards, it is Werewolf variant with individual player powers. However, I prefer to think of it as a cautionary tale of the evils of technology in games and a case study of mismanaged crowd funding fiascos. The further I looked into trying to find the instructions (via googling the publisher Artistic Justice), the bleaker the tale of woe about the years of delays, undelivered products and Kickstarter campaigns became. By the time I did find the instructions (via the internet archive of the old webpage), I felt dirty even owning it, much less playing it. The art is nice, though.

My Verdict: $4.00 spent and I’d like to have my time, money and innocence back.

WadeMonnig replied the topic: #283074 14 Oct 2018 16:08
Do you think it is fair to look at fourth chronicle of Lost Legacy as a stand alone? All of the lost legacy games are sold separately, but my personal experience is this was a horrible stepping on point. How do you feel about a "series" of games when the first one hasn't proven worthy of additional releases?