Santa Toad is coming to town 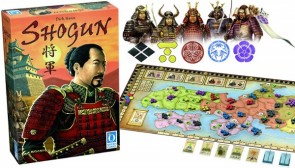 There Will Be Games
This game gets played but once per year… As the weather gets cooler in the U.S. and we get closer to year end, you can feel the excitement in the air. Yes, boy and girls, it is almost that time of year. Santa Toad is coming to town.

Every year, specifically on the day Thanksgiving is celebrated, I will break out my copy of Dirk Henn’s Shogun. (Editor’s Note: Never let the facts get in the way of a good intro. Besides, I didn’t like the sound of Turkey Toad.) My kid’s will eagerly gather around the table while my wife scoffs. My youngest daughter will restate that this is her absolute favorite game. I will have prepared for this moment as I always do, by rewatching a couple of rule explanation videos. We’ll delight, as we always do, at the cube tower. I’ll set up the game and we’ll debate who gets what color…as long as I get black.

The start will be a bit rocky, as everyone slowly remembers the rules. As the smell of the Thanksgiving feast being prepared wafts over the tables, we will ironically complain that there is simply never enough food in this game. The rounds pick up speed, as everyone finds their groove back. After a few hours, a new champion will arise. They will stride over to the chalk scoreboard on the kitchen pantry door and write their name as reigning champion of Shogun. The players involved in the game will insist the game went quickly, while those sitting on the sidelines, will tend to disagree. Finally, this Wallenstein retheme will be returned to the shelf with much less fanfare that when it was pulled out. There it will reside, most likely, until next year.

It’s not a conscious decision not to play it until next Thanksgiving. But there always seems to be something new to play, something that plays quicker, or something else that I’d like to play in order to review it. I picked up the Big Box edition from someone who, more than likely, had the same issue getting it to the table consistently. Maybe if, cube tower notwithstanding, it was more exciting in appearance it would get the benefit of a few more plays. It can be a hard sell to the uninitiated when it is a huge map, tons of cubes, and a three hour play time (your mileage may vary). I genuinely enjoy this game, and have no plans to purge it from my collection. You can call it a shelf toad, or as I have dubbed it “Santa Toad,” because I know I will play it at least once a year on my holiday break….and I’m cool with that.
There Will Be Games

WadeMonnig wrote: He sees you when you're sleeping, I knows when you're awake. But, mostly, he just stares at you awaiting that one time a year when he gets to shine.

This is like Steve Martin's old routine about the Crimestoppers:

Gary Sax wrote: 100% honesty and my circumstances, once a year is enough for me to own a great, longish game without any toad guilt.

I'm counting that as one vote for star trek: ascendency

Michael Barnes replied the topic: #303197 06 Nov 2019 10:23
You know, I played A LOT of Wallenstein back in days of yore...but for some reason, Shogun never stuck with me. It’s not like it is really all that specific to setting or period, but the Japanese relocation just put me off it. I think I may have played Shogun 2-3 times maybe? No idea about the expansion, never even seen it.

Now I kind of want to get Wallenstein again in its big old stupid Queen box.