Discount Dive #3: Around the World in 80 Days 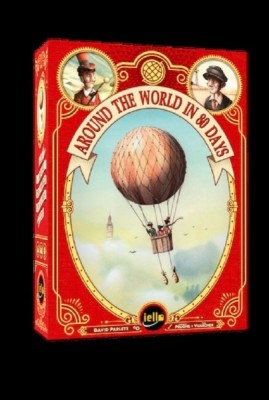 There Will Be Games
Traveling the boardgame world for less than $20.00

Way back when, in 1979, the first ever Spiel de Jahres winner was a title called Hare and Tortoise. It has been re-published and retooled dozens of times over the intervening years and the latest incarnation is Around the World in 80 Days. Not that I knew any of this when I picked it up. I just saw $18.00, Jules Verne, an Iello logo and a snazzy box.

Speaking of the snazzy box, you can see the box art in the review image. What you can’t really see is the foil stamping and cut-outs that really make it pop. And check out the illustration of the old fashioned hot air balloon! You know the one I’m talking about, the hot air balloon that Phileas Fogg never sets foot in even once in the novel? What?!? No Hot Air Balloon and his name is Phileas and NOT Phineas? My whole world is a lie.

Of course, it is actually what is inside the box that matters. The game itself is a modern day trip down memory lane…if that makes any sense. It’s not a golden age “we’ll learn as we go” game but an introduction to “Let me explain the rules before we start.” Not overly complicated by any measuring stick, it is a family game before “family game” became Kickstarter for “Well, your gaming friends certainly won’t play it with you.” It is a racing game with frothy head of math and bits of fiddly floating at the bottom. Take the win conditions: Be the first to travel around the world and get back to London….after discarding your three police rumor cards…and make sure you have less than 10 British pounds left when you arrive.

Movement is done by spending Pounds, with the number of spaces you can move costing exponentially more for each space per turn. Moving a single space costs 1 pound, moving two costs 3 pounds, etc.. etc.. Don’t worry; it’s all laid out on your Travel Journal. Each space can only be occupied by one player at a time (players are represented by a top hat) and there is plenty of variety to the spaces. Some allow you to bet on where you will be when your next turn comes around or discard a police rumor card and collect some cash. Around the world in 80 days includes a fair amount of puzzley math as you try to get the best bang for your pound when you make a move. I’m not a huge fan of math as entertainment but, let’s be honest; it does its job of keeping you occupied while waiting for your next turn.

Looking at the game with a jaded reviewer’s eye, some of the mechanisms are dated. The Passepartout cards are essentially “Chance?” cards. But, since you are choosing how far you move and what space you land on, you can cut these completely out if you so choose. Granted, it won’t stop other players from using them and possibly affecting you by stealing money or other nefarious things. The game supports 2 to 6 players with 5 seeming to be the sweet spot when we played. Six players just puts it over the amount of time you are willing to wait per turn and four players doesn’t really let you exploit the “betting” spaces to the full advantage.

The verdict? Without a doubt, well worth the $18.00 I spent on it. Iello’s production, as always, is top notch. It is a fun as a family game, a virtual board game history lesson and it lets you spout useless Jules Verne balloon trivia to anyone who will listen.

Discuss this article
Log in to comment
Posts in discussion: Discount Dive #3: Around the World in 80 Days