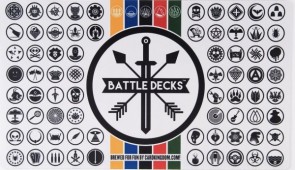 The perfect way to get back into Magic: The Gathering.

My son recently started to get a little more serious about the schoolyard card games - Pokemon and Yugioh of course - so naturally that made me curious as to whether he could handle playing Magic: The Gathering. And that, of course, led to me missing Richard Garfield's seminal collectible card game design that I first played 25 years ago. We picked up the new Spellslinger starter kit, a pair of decks even a rusty old timer like me, who hasn't been really into the game since the late 1990s, could tell were hot garbage. But with the programmed instructions, my boy was able to play and play competently. More importantly, he got interested in the game. And I had that warm homecoming feeling of getting back to a timelessly great game that 25 years worth of other games have distracted me from.

So I started to dig around for ways to sort of tentatively creep back into Magic. I wasn't interested in grabbing a new Guilds of Ravnica booster box and diving right into this brave new world of Planeswalkers, sideways-printed cards, things you can cast while they are in the graveyard, "Guild Lands", and something called a "Tron" deck. I also didn't really want to go the old fashioned "theme deck" route, which led me tentatively into and out of Magic a few times over the past 25 years. I had done the "buy a lot of 1000 random cards" thing sometime around Kamigawa block, but that didn't take either. I wasn't about to buy singles to make a pauper cube or whatever. I wanted a way to get back to the game casually, easily, and most importantly inexpensively.

Enter Card Kingdom. This is a Seattle-based retailer that puts together a couple of varieties of in-house preconstructed decks at a reasonable price. I had heard good notices about their Rookie Decks, single-color 60 card decks that focus on just a few core mechanics, and thought I'd give those a shot. Retailing at $5.99 each, I figured the lands and commons would be worth about that much anyway.

These decks proved to be a far better teaching tool than the Spellslinger kit that Wizards offers. They really get back to the basics, and for kids in particular I think they are an effective way to focus not on what Trample does, what Fly does, and so forth but on the REAL way to play the game. Without a bunch of complex card interactions, combos, or synergies it is a lot easier to show kids concepts like board control, trading creatures in combat, and not playing everything in your hand just because you have the mana for it.

I feel like they are a little land-heavy, at least for my taste, and that has led to a couple of frustrating games where River would lose control of the board and find himself reeling while drawing land after land. But hey, we've all been there, and that is part of the game as well. The decks may actually be a little too simple not in terms of the gameplay but in terms of the variety. They are packed with full playsets of the cards they use (all commons) so they lack dimension. But with that said, this makes them an excellent springboard for rookie players to take cards out and rotate cards in to see how things work.

Over on the adult table, I decided to check out several of the Battle Decks Card Kingdom offers. These are also 60 card precons, all quite thoughtfully built by their team to leverage specific concepts, mechanics, or themes. There is a WB vampire deck that uses a lot of the Ixalan vampire cards to create a massive, life-draining army of bloodsucking conquistadors. There is a BR aggro Pirate deck and a UB control deck that is all about controlling the board until you can drop some big Sphinxes from Amonkhet. Still another UG offering finds you buffing a Merfolk army, but maybe you prefer something more shocking like a 4 color Superconductors deck that plays with the Energy mechanic. There are a ton of these to choose from ranging all color combinations and archetypes, all priced at $9.99 and with a couple of new offerings released each month.

These decks are, in my opinion, the single best way for lapsed players like myself to return to Magic: The Gathering. For ten dollars you get a very functional, very playable deck that is likely to show you a number of new cards and introduce mechanics you might have missed. Or, you might come across an old friend like Atog as I did in the UR Grease Monkeys deck. There are no "limited", "modern" or any other barriers- every set In my time with the Battle Decks I have (over 20 at this point), I've really enjoyed seeing how each fares against another and I've been surprised at how generally well-balanced and competitive they have all been. There have been some that have struggled (the UR Izzet Battle Blitz deck in particular never seems to work) and a couple that have felt a little overpowered (the 8-2 UG Plow the Sands deck), but each has offered a very solid experience. You aren't going to win against the Friday Night Magic sharks with these and I wouldn't recommend them for those looking to play seriously (whatever that means) but for kitchen table Magic, there is tons of fun to be discovered with them.

I took these over to a game thing at a friend's house and just put them out on the table. Everybody picked a deck that looked or sounded appealing and partnered up with someone else. The two people who had never played Magic were able to get right into with some help, and those of us who used to play were stuck in right away. It was exciting to be playing Magic: The Gathering again without the awkward and costly first steps of collecting the right cards to build the right decks. For casual players who just want cards to play with, who want GOOD decks and not scraped together jank, and who don't care about building that tournament-ready Tron deck (apparently it's an Urza Lands thing, which surprised me), there is no better Magic product on the market than these Battle Decks. And they all come in a little plastic card box with a couple of token cards and a sticker, so each one is a fun little package with some cool graphic design.

I love these decks- the Rookie decks are awesome for kids and beginners and they are priced low enough that they practically encourage you to give them away to newcomers. The Battle Decks offer much more complexity, compelling builds, and a range of cards and gameplay that spans all 25 years of the game. I was a little apprehensive (and intimidated) about getting back into Magic, but these decks have made it easy and fun to jump right back into kitchen table play.

Cardkingdom.com in no way sponsored, supported, or commissioned this article and did not provide any materials for it. They probably don’t even know I exist. But if you like this article and others like I what I provide, your Patreon support would be greatly appreciated. https://www.patreon.com/michaelbarnes

Discuss this article
Log in to comment
Posts in discussion: Return to MTG - Card Kingdom’s Rookie and Battle Decks

fightcitymayor replied the topic: #285487 07 Nov 2018 09:42
WotC relies on lapsed players to phase into and back out of Magic over the years. When Dominaria came out in April plenty of old-timers rejoiced, as that is the plane where Magic spent basically the first decade of its existence. They even brought Richard Garfield back for the design team, so the nostalgia factor is pleasantly thick. And they also brought back "Core Sets" with Magic 2019, so that's another nice option to get a more basic deckbuilding experience without a lot of obtuse keywords or higher-level strategy. They have pre-con Planeswalker decks of M2019 (and Dominaria) for like $12-$15 at any WalMart in the land.

Michael Barnes replied the topic: #285522 07 Nov 2018 15:59
I got the Guilds of Ravnica Planeswalkwe decks- they are awful. That product segment is really odd. It’s the only way to get the Planewalkers, the decks are really more like sampler platters for their sets than coherent decks, and they aren’t as compelling an entry level product as these third party decks are or Wizards products like the duel decks or the old theme decks that at least attempted to have a cogent build.

What is waaaaaaay better, as far as Wizards products go, are the new Guild Kits. These five decks (and five more coming) span every Ravnica set. Collectors and power players will want them because there are apparently some very sought-after reprints. Casual slummers like me will want them because the decks are fun to play and feature both the old time cards as well as the latest and greatest. They are more expensive than the Battle Decks though- $19.99- and right now they are sort of hard to find.

I love how so many cards have never changed in all this time.
Read More...