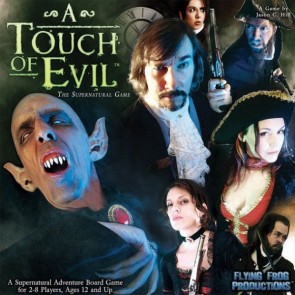 Flailed through a learning game of Touch of Evil tonight. It's kind of Talisman like. You need to get a lair card instead of a Talisman, and then go fight the big bad. We flubbed a couple of things, but mostly got it right enough to get a sense of the game. I liked it, but the Man was disappointed.

I have to play it a couple of more times to really judge, but in the light, 90 minute horror themed, beat on monsters game class, I think Buffy and Last Night on Earth are more fun. But ToE will get played, since it is a different style of game. It's a bit more subdued, and requires very little brain power to play.

I'd say it would be another good game to play with middle school aged kids, but the boys I know would much prefer to play LNoE, and the girls won't come near my horror games. When I was punching Betrayal at House on the Hill, one of them saw the counter marked "pool of blood" and went screaming out of the room. Now, when she comes to visit, I use the pool of blood counter to chase the girls out of the room when I want them out from under foot.