Malloc Talks about the new Titan 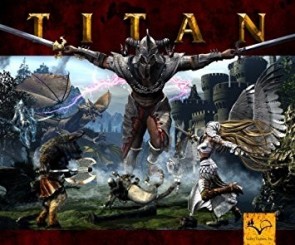 Most of the folks out there (at least in North America) should have received their pre-order copies of Valley Games Edition of Titan. I managed to get my copy sometime last week and somehow get it on the Table Wednesday. This is a quick and dirty on this new version of the game.

When announced sometime last year, most of the gamming world though that Valley Games had bit off much more than it could chew by announcing they would be reprinting Titan. Addmittidly I had my doubts as well. VG, a small company descending on the scene out of the Great White North, had already delivered with a reprint of Die Macher, one of the most talked about Euro Grail games and was at the time working on Hannibal:Rome VS Carthage, a War-Game grail that at the time was selling for over $250 on ebay. Adding Titan, the missing AT grail game to the list, would mean that this no-name company would be putting 3 of the most sought after out-of-print titals back on the market.

In addition to the printing VG promiced to rework the games (at least the last two) so that they would have the updated componants and artwork that these classics deserved.  No small task, seeing as how the average gamer will complain about anythign from the lid on a box being to tight, to the color palett of the art being displeasing. VG was also smart in that they made no large changes to the rules of either game.

So how did they do? Well to be brief about it, they kicked ass. How so? Well let me do some splainin'.

Lets start with what you get when this thing is delivered. The game box weighs in at 8 pounds, and is as jam-packed with tokens and bits as can be. In fact, the lid on the box does not close all the way until the creature counters are punched and the sprues removed from the box. Once punched however the box is the same size as the Hannibal box, and the two games share a similar style, and look nice when displayed together.  In addition tot he base game those of us who pre-ordered got a second box of equal size for the plastic titan figures VG sent along for free. (More on these later)

So after punching out all 13 counter sheets, one is faced with the challenge of organizing all those nasty creatures so that they are easily arrainged for the next game session. In the past edition of titan this usually meant running out and getting a Plano box to hold all of your stacks in. VG however was nice enough to engineer a clear plastic insert, labeled with creature imaged printed on the inside of the box, that exactly fit all of the bits for this game. The fit is snug, but I managed to get all of my units in there no problem. This tray comes with a lid so nothing falls out when the game is stored on its side.

Adding to the heft of the game is the thickness of both the mainboard and the battle mats. All are of a nice thickness and all have two sided mounts (making them less likly to bow). the Main board has artwork mounted on the back that is a nice astethic touch. The Battle mats are two sided with the odd board having the game title mounted on its back so that when put in the box this is what you see first when removing the lid. (for those of you who were worried I had no trouble opening this game)

As for the look of the game. VG's version is done with a very dark color palette. There is blood splattered over most things and I personally feel it conveys the dark war like topic of Titan very well.  The Mainboard has been updated but is still completely familiar to players of the original. The Battleboards are a large improvement over the flimsy cardstock versions found in the AH version.  For the unit tiles VG choose to go with 3d images of the monsters, these images look good but can at time be hard to tell apart from a distance, However the name of each creature (as in the original) has been placed in large text at the top of the counter.