I was going to save this for our return of the Friday news, but really this deserves a little extra, I think. 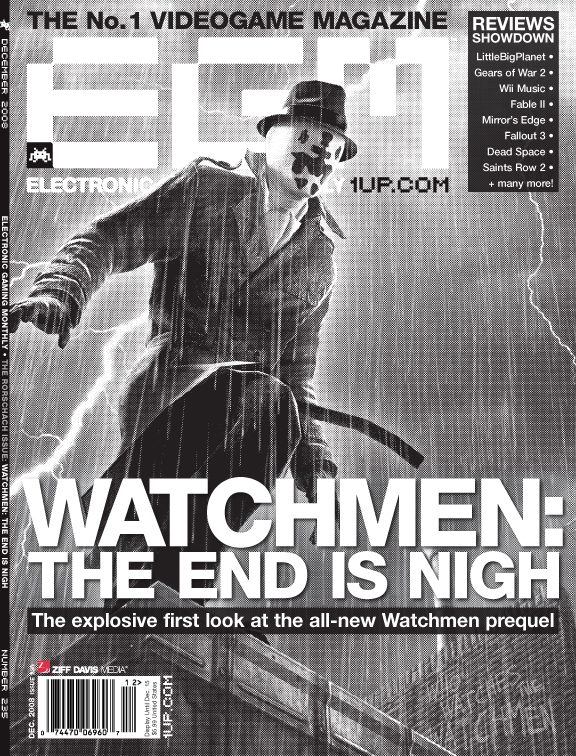 I just recently learned that as of January 6th , 2009, the magazine "Electronic Gaming Monthly" is no more.  Another company bought out their parent company and is keeping the online element but ditching the magazine itself.  The magazine's current issue is its last, meaning they won't even get a chance to send themselves off properly.

Anyone who knows me knows that I'm as big of a videogame fan as I am a boardgamer.  My avatar is for Guitar Hero, an incredibly popular series of videogames.  I once wrote a "Top 100 Console Game" series of articles for another website.  I have 13 different game systems and a collection of around 400 games.  I've been playing games since I was 4 years old, on a Pong system my parents had.  I can earmark certain game systems as belonging to particular periods in my life--the Atari with elementary school, the NES with Junior High, the SNES with High School....

...and with each game system, I can remember reading EGM and spooging all over whatever the news was coming down the pike.  Drooling over screenshots of games yet to come.  Devouring reviews for games I'd yet to get to play.  Laughing at some of the stupid shit that they'd actually print.

I think the first issue I remember purchasing for myself was a 1991 gimongous thick issue with Zelda: Link to the Past on the cover.  I bought it because it advertised that it had Street Fighter II moves in it, and since we were all hooked on that, I had to have those.  I had read the magazine at the grocery store before, but I distinctly remember that was the first one I purchased.  From there, it became a staple of my reading experience.

I would read other gaming magazines over the years...Die Hard Game Fan had gorgeous pictures and high quality glossy pages, but their content just wasn't as good...(plus they were so biased my friends and I took to calling them "Die Hard Sega Fan")...there were offshoots and experiments such as EGM2 and Intelligent Gamer, but I always came back to EGM, every time.

Yeah, they were juvenile.   They had a fictional reviewer "Sushi-X" that was a rib on some Japanese anime character and they actually kept the gag going for years.  Their April Fool jokes were legendary, and they tricked gamers into believing all sorts of things such as an impossible to reach end boss (Sheng Long) for Street Fighter II, to a "nude code" for Tomb Raider (and nailing gamers AGAIN with a purported nude code for Dead or Alive: Beach Volleyball)...their letters section would have generally smart-assed responses to stuff that got sent in....I don't know, you just sort of get used to the flavor of something and that's that.

I know in recent years they'd run afoul of several game companies for giving less than stellar reviews to games.  A big example was Assassin's Creed, to which they responded to fairly lukewarmly and so the parent company pulled all of its advertising dollars from the magazine.  They never hesistated to tell you what they really thought of a game, and even if you didn't agree at least you knew where their opinion was coming from.  Games that they thought were really good would get loving, multi-page reviews--and high-profile games that disappointed them would get multi-page reviews detailing with no uncertainty where they thought the game had gone wrong. 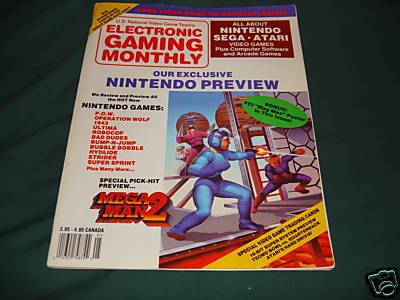 So many gaming magazines have come and gone over the years, but I truly thought that EGM would just sort of last forever.  After all, video games right now are as popular (if not more so) than they've ever been.  Wii Sports has sold more copies than any game, ever.  You can't find Wiis even two plus years later.  I kind of expected that so long as that crest continued, so too would the fate of EGM.

But now...poof, it's gone.  It's so funny because I remember gamers mourning over Dragon and Dungeon, but I never really got that much into either of them so I didn't understand why they felt so strongly about the magazine going under.  Turns out karma's a bitch, eh?

I'll miss Hsu and Chan, Seanbaby's "Cream of the Crap" (where he would tear bad games some seriously hilarious new assholes), but most of all I'll miss the honest reviews and scoring of games.  I mean, seriously....what we have left is stuff like Gamepro (do you boot up?  You get 4 smileys out of 5) and worse, Game Informer (who will indicate they don't like a game that much and still give it like a 7.9 out of 10--that is, when they'll admit to not liking a game, important since their parent company is a game retailer.)

It's stupid to get sentimental over a freaking magazine, but hot damn, I miss EGM already.  Pass the controller, man.