Frank La Terra is going to kill me, but Dominion is good shit 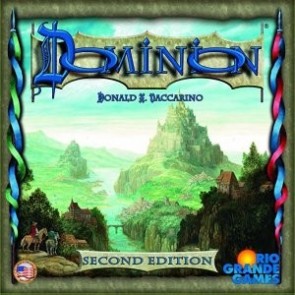 I will probably do an official review...eventually.

Look, I know you've been conditioned to be cautious, wary of hype.  When you've seen so many "second comings" heralded over the years (Caylus?  BETTER THAN CAYLUS?!) I can't say as I blame you.

I mean, who wants anything to do with the latest Eurogame?

That's the problem....this ain't a Euro game.  At least, as far as I can tell.  It's a frickin' card game, with roots more strongly planted in Magic: The Gathering than Princes of Florence.  After all, the game has just as much screwage and attacking as you'd like, and enough variance and randomness to make your head spin.  That's what makes it great.

I know you're also wary because it plays quickly.  Unlike what you may believe, length of a game...or absence thereof...is not a true barometer for a game being good or not.  Twilight Imperium 3 is good irrespective of its monster playtime.  And Dominion is good despite its relatively "light" playing time.

I don't blame you for feeling burned by the hype machine before.  Who hasn't?  I mean, Agricola is a serviceable game, but it didn't cure cancer.  Neither does Dominion.  I think.

You guys may hate on me all you like, but this is one of those times where the hobbyists of The Other Site have gotten it mostly right.  Hell, a broken clock is right twice a day, innit?