Hot
B BradHB Updated January 07, 2020
34743 0
Add to favorites
There Will Be Games
Sports board games are relatively easy things to manufacture. After all, they lend themselves to the medium pretty well (with some exceptions) – there are two players/teams, everyone understands what the goal is, and there’s the option of a time limit. I’ve played great board games of boxing, football, and ice-hockey (well, the hockey one wasn’t great, but at least it existed). There is one sport that seems something of a challenge to do, however, and that’s because it’s not technically a sport: pro-wrestling.

When you think about it, though, it should be ideally suited to the medium. There are great sports games, great superhero games, and great Saturday Morning Cartoon games. Pro-wrestling is, essentially, a blend of those three styles. However, it is the fact it is a hybrid that makes it so hard to emulate. It’s just a difficult beast to get a hold on.

There are, however, a few games that have taken a relatively decent stab at it. I’ve listed four of the best that I have played, below: 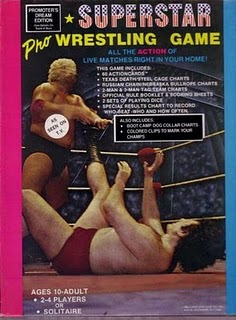 Superstar Pro Wrestling
Superstar Game Co, Inc.
1984
If you’re looking to emulate a time back when wrestling was still being sold as a genuine combat sport (despite the wealth of evidence to the contrary), then Superstar Pro Wrestling will entertain you a hell of a lot. What’s more, all of the gubbins needed to print off and make your own copy are freely available at the Yahoo! Group here (as well as a wealth of fan created material, featuring up-to-date wrestlers).

The game comes with each wrestler rated on a card, which also details their moves, tag-team wrestling ability, skill with submission moves, etc. Players put together a fight card of whatever matches they want, and then have a blast, running through what happens. There are special rules supplied for Texas death, cage, and strap matches, as well as tag and six-man tag rules.

Play is mostly automated, but to be fair, Superstar Pro Wrestling describes itself as “a unique simulation of professional wrestling, and not a simple board game”. The fun of the play comes from building your own fantasy wrestling promotion and watching it develop, rather than the actual matches themselves. This is probably a good thing, as the main flaw of Superstar Pro Wrestling is that, tragically, the actual in-ring action is relatively unrealistic. Wrestlers use piledrivers as opening moves, and your World Champion will drop the title to something as stupid as an arm-bar.

If you’re after a giggle with some buddies, then the unintentional humour (not to mention the price tag) will make this worth checking out – but it’s unlikely to prove to be a long-term love affair. 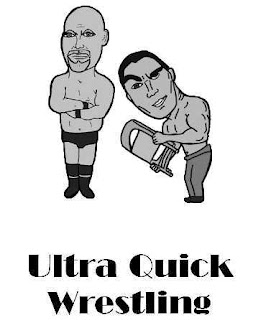 Similar to the above Superstar Pro Wrestling game, in that the central concept is that you play fantasy wrestling promoter with your dream roster of real-life wrestlers. Unlike Superstar Pro Wrestling and a lot of other fantasy wrestling games, however, the game makes absolutely no attempt to detail the matches themselves. Instead, the game system – through a medium of totting up points, d100 rolls and some chart referencing – concerns itself with manufacturing the storylines and feuds that make wrestling so interesting to watch.

Rather than worrying about Mick Foley forcing Kurt Angle to submit with a abdominal stretch, you instead roll that Team 3D come running down the ramp and knock The Hardcore Legend through a table. Next week, Raven makes his surprise return (he does that a lot – cf. real life)!

You’d think that this would probably get tiresome after a while, but the nature of the events and their cliffhanger endings actually make you want to schedule another card and run it to see what happens. Even though its three in the morning and I have to get up for work at eight.

The publisher publishes yearbooks with updated stats, and there is a fictional set, an early 90s WWE set, and a classic ECW set, if you’d rather run with one of those. 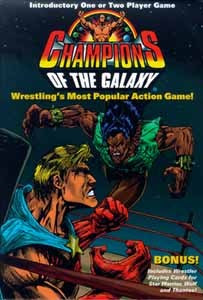 Champions of the Galaxy
Filsinger Games
1986

Despite being set seventy years in the future, and featuring a roster consisting of aliens, robots, superheroes and monsters, Filsinger Games’ Champions of the Galaxy is one of the best wrestling match simulators I’ve encountered. The simple but effective mechanics ensure that no-one opens up the match with a piler-driver, and combos and counters actually work effectively. Unlike Superstar Pro Wrestling, there is also a good amount of choice and strategy to play with – enough so that it doesn’t feel totally automated, but luck based enough that non-wrestling fans could get a blast from it.

Again, a large part of the appeal comes from making up your own federation and its storylines, and whilst you may not know the characters straight off of the bat like you do with real-life wrestlers, they’re all colourful enough so that you can get into them really quickly.

Or, if sci-fi isn’t your thing, there is also a sister game Legends of Wrestling that runs on the same engine but features some...um...legends of wrestling.

The fan support for this game is just insane, and you’ll never run short of wrestlers or gimmick matches. Also, a major advantage of the sci-fi/Saturday Morning Cartoon vibe, is that your friends who aren’t wrestling nuts can get in on the action. It’s a pretty fun blast, all in all. 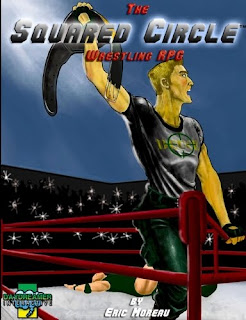 The Squared Circle steps away from the concept of doing wrestling as a chart driven dice-fest, and decides to tackle it as a table-top RPG. The good news is that it works really bloody well. Each player creates a wrestler from one of the “classes” (powerhouse, brawler, high-flyer, etc.), and you all write the “adventures” together, without a GM, booking each other into angles and matches to make a really fun experience.

The in-ring system is also amazing, providing full control over everything you do, in segments, whether you’re making a move, resting, grabbing a chair, climbing a ladder, or working the crowd. Of equal importance is putting your opponent down, making sure you don’t wear yourself out, and putting on a good match. The more you entertain the crowd, the quicker you’ll level up!

Fan created material is a little thin on the ground, but the sourcebooks are excellent, so far covering Mexican wrestling, Japanese/Garbage wrestling and 1980s style. There’s also a sub game for managing your own company, which will please some people, although I find it a bit much myself.

Also new on the line is their Rise of a Legend series, which allows you to play the game on your own, fusing the full system of the RPG with a Fighting Fantasy/Choose Your Own Adventure type game. Man, I wish more games would do that...

It has to be said, that whichever one you choose, pro-wrestling games will make for some of the most fun gaming nights you’ll ever have. Enjoy.

Brad Harmer is the editor and frequent columnist for Emotionally Fourteen.