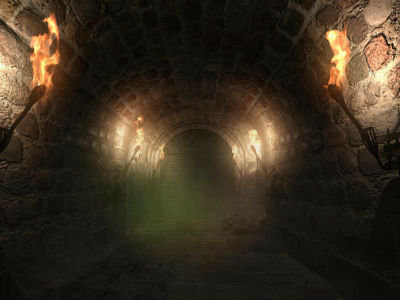 Dungeoneering is stamped firmly into my subconscious, my brain imprinted with its labyrinthine corridors from obsessive childhood exposure to Dungeons and Dragons. Later those pathways got re-enforced by the consumption of countless gamebooks and video games. It’s a wonder I don’t see the whole world overlaid with a faint tracery of flickering torchlight.

So it was inevitable that when I re-awakened my interest in board games a decade ago, I’d go seeking for dungeon delving adventure. It should after all be an eminently suitable subject for the genre. Rooms and corridors can easily be laid out on a board, whereas open environments always seem a trifle fake when translated. The tactical nature of dungeon combat offers a solid strategic base. The physical beginning and end of the map bookend the quest well and make a single play satisfying so there’s no need to focus on long-term play.

Sure enough there were plenty of titles to investigate. But I was disappointed at what was on offer at the time. Most seemed to be bloated with excess complexity or play time or both, and none were better than my favourite designs from my teenage years. The problem, it seemed was the desire to try and shoehorn character development, variety and player interaction into the same design. Once all those variable were in the mix trying to keep a lid on balance and play time with spiralling player powers, a rich get richer set-up and a wide range of possible situations seemed impossible.

In the intervening years and the accumulation of design experience, trimming down this roiling cauldron of mechanics has come to seem a bit less improbable but it remains difficult. The rise of cooperative games has been a huge boon. I don’t enjoy most co-ops but the dungeon setting is one situation where it feels right and proper, mimicking the traditional model of a party of heroes teaming up to brave the subterranean horrors together.

But I can’t really list my favourite dungeon game without specifying a bit about what I feel is specific to the genre. I’d say in addition to an underground setting it needs one of exploration and character building (even if only through loot collection). Ideally it’ll have both. That disqualifies games like Dungeon Command, and rightly so since that’s purely a tactical miniatures game. So without further preamble, I present my five favourite dungeon games of all time. Two are very old, two are very recent but what I really found surprising is that even after all my investigation and play time in the genre, there were only really ever five candidates for this list. They stand head and shoulders above their peers.

Warhammer Quest is a flawed game. It’s fiddly, slightly over-long and excessively random. But it remains a cult favourite, commanding vast sums on the second hand market, because its such a comprehensive treatment of the genre. Basically any situation you could imagine encountering in a standard dungeon is possible, if unlikely, in Warhammer Quest. And if you have an unusually good imagination, or an unusually broad experience of things found in dungeons you could probably find what you wanted somewhere in Games Workshops’ world and add it to WHQ with a minimum of fuss. The planned iOS version, which will cut down the administrative overhead and the play time, has the potential to be absolutely amazing if it’s done right.

This is probably the game that pushes hardest against the dungeon game definition. Character advancement is minimal, combat isn’t real tactical (although the game is), and the faux-renaissance setting doesn’t conform to the fantasy stereotype. But it’s underground, and involves plenty of exploration, and there are demons. It’s also one of the best looking games around with its pre-painted figures, hellish artwork and chunky tiles. Gameplay is thrilling but also curiously strategic, especially for the monster player who tends to get short shrift in games like this: compare it with the relatively simple choices facing the Genestealers in Space Hulk or the Zombies in Last Night on Earth.

I was irked slightly by the expansion, because as things stand the varied scenarios offered in the base game and online haven’t been playtested with the expansion content. So theoretically you’re not even supposed to mix in the new corridor tiles and power cards, let alone use the new demon and character class. So unless you separate the components, once mixed in you’re stuck playing expansion scenarios. If, like me, you bought both base and expansion at the same time, that sucks pretty badly.

I’ve played this relatively little compared to the other entries on this list. Unsurprisingly, becauses it’s still relatively new. And I’m still a little uncertain as to how much depth and balance it has, or whether the splitting of quests into two encounters is really worthwhile. But I do know it’s an awful lot of fun to play. And I appreciate that it’s the only multi-player game on the list that offers direct, head to head competition. And I also know that the campaign system offers a surprisingly high level of narrative and customisation to both sides and is quick enough to be a realistic prospect. Whatever future flaws I discover in the game, those are lofty goals to have achieved.

And I’ve also had the chance to play and review the conversion kit. Which I suspect is worthwhile for anyone that intends to play a lot of this new edition, regardless of whether they own the old one or not.

This is a strong candidate for the game I’ve played the most times in my entire life. Blindingly fast, stuffed to the nines with variety and detail and more unforgivingly brutal than anything else in my experience, it never ceases to be a joy. Not even when, as not infrequently happens, you die in the first turn. In what other game could that possibly be seen as a good thing? But in Dungeonquest, it’s all part of the charm. I never understood the furore over the FFG edition. They should have been celebrated for bringing this brilliant classic back into print, not hauled over the coals for a slightly over-complex combat system. Especially not when they made a number of minor improvements to counteract it.

And it also gives me an excuse to remind you all of this session report. Which I still think is one of the better things I’ve written.

This entry is really dedicated to all the D&D Adventure System games: WoA is simply my favourite of the three but since they’re modular, the more the merrier. It deserves top spot because it is, simply put, the very essence of everything fun about dungeon delving distilled down and packaged into a simple, short game. You get to explore the unknown, fight monsters, loot treasures, avoid traps, encounter NPCs, develop characters, plot basic tactics and enjoy an overarching quest narrative in under an hour, rules explanation included. I’ve taken stick for loving these games as much as I do, and will probably get more for slotting this in at number one, but I’ve had about 25 plays out of these games so far, and there’s plenty more. I haven’t even tried a full campaign yet.