Games Of The Years 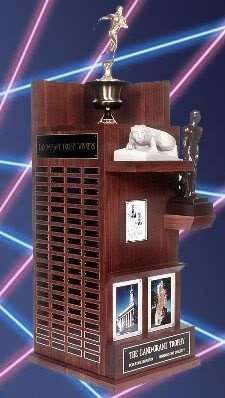 I got involved in this hobby seven years ago, and I’ve been writing about it pretty steadily for about three, with occasional pieces before that. At some point every board game writer will have to deal with the expectation to crown their “game of the year.” This is tricky for a lot of reasons.

First of all, the bulk of hobby game releases are clumped in the last four months of the year, after GenCon in August and Essen in October. It’s not uncommon to miss playing major releases for months, even years, while those games trickle into game groups around the country. This is especially tough if your only want to play things that interest you, as opposed to things that are new. A lot of stuff has passed me by just because I know it won’t be my thing (most Eurogames) or I doubt I will have my opportunity to play (most two-player titles). The other difficulty is that it can be tough to tell what will actually last and end up being an important game. I’ve played some titles that looked like keepers, and were for about six months, but then faded down the stretch. Still others were growers, only turning out to be great in hindsight. The end-of-the-year window works against this as well, since it doesn’t allow games a lot of time to settle into their groove.

I’ve named four games of the year in various written pieces, and I began to think about what games ended up being as good as I considered them at the time. So here are my games of the years, with some good hindsight behind them. In a shameless ploy to pad this piece, I’m also including the years 2007-2009, when I was involved in the hobby but wasn’t yet concerned with picking a champ. For the purposes of my end-of-year pieces, I have always included reprints, since they share game space and time with new titles. I also considered games in the year they were released in English, with one big exception. Might as well start with that one…

2007 – My first year in the hobby is a blur in terms of that year’s releases, because everything was new to me back then. But one game from that time period embodies all of that wild year of discovery, even if I didn’t play it until the next year. That would be Agricola, which made its appearance at the 2007 Spiel and immediately became a sensation on BGG. It didn’t make it as an English release until 2008, but I tie it in with 2007 for the immediate splash it made in the hobby and for how closely I tie it to my early days of the hobby.
Game of the Year 2007: Agricola

2008 – In hindsight 2008 ended up being one of the strongest years for my favorites. At the time I would have said the game of the year was Battlestar Galactica, and that wouldn’t be a bad choice. I played it incessantly for a good 18 months until most of my group moved on. The same could be true of Dominion, which I haven’t played seriously in a while but was an obsession for at least two year. At its height my wife and I were averaging about 5-10 games a week. Both of those titles burned bright, but I eventually moved on. One that is a big deal in hindsight is Talisman, which I didn’t even play until 2012, but is now a favorite in my household. But I can only pick one, and the choice is obvious. Nothing has ever impacted my perception of what games can do more than Cosmic Encounter, which got a long-overdue reprint from Fantasy Flight in 2008. It’s been my gaming obsession for the last several years, and it’s head and shoulders above everything that came out that year, or any other year for that matter.
Game of the Year 2008: Cosmic Encounter

2009: Now this is tricky. The truth is that 2009 was a transitional year for me, when my love of Euros was on the wane but I hadn’t yet truly embraced my love of trashier games. It was a pretty feeble year for games besides that. Some games, like Dungeon Lords, started strong but ended up flaming out after about five games. Other big releases, like Chaos In The Old World, ended up not being especially to my tastes. But there are two reprints that dominated 2009 for me: the massive third edition of Space Hulk, and the lavish production of Tales Of The Arabian Nights. Both games loom large in my collection, both in terms of their impact on me and physical size. But Space Hulk has proven to be a difficult game to get played. It’s an amazing title, but more of an heirloom. Tales of the Arabian Nights challenged my conception of what a game could be and what they could accomplish. That ended up being a greater legacy for me.
Game of the Year 2009: Tales of the Arabian Nights

2010: Now we come to the first year where I actually tried to order my favorite games and crown a champion. Don’t go looking for the article, since it’s buried somewhere on my Facebook profile. My champion that year was Innovation, Carl Chudyk’s brilliant game about civilization and human invention. More than that, Innovation has stuck around and proven to be the kind of game that I can consume endlessly. There are some other notable games from 2010 that have stuck around for me. Notably Magical Athlete has become one of my go-to games for non-gamers, and Merchants and Marauders is one of the top “experience” games out there. (More on that one in a minute.) But neither of those has managed to unseat Innovation as a perennial favorite for me, so for at least one year I crowned the right game.
Old and New Game of the Year 2010: Innovation

2011: A lot of people declared 2011 one of the best years for games ever, and it’s hard to argue when I think about the titles I played. My original champion was Merchants and Marauders. I feel comfortable saying it belongs in a champion circle somewhere, except for one little problem: it actually came out at the tail-end of 2010. I kind of chose to ignore that at the time, but now that I’ve played more 2011 titles it has a lot of competition. Mage Knight has shown itself to be one of the great fantasy board game experiences, one that I still am amazed is in rotation for me. Speaking of fantasy games, Wizards of the Coast was really busy in 2011, releasing two of their D&D Adventure System titles and Conquest of Nerath. But the crown has to go to the game that shocked me with how direct and fun it was, and that game was King of Tokyo. I had forgotten how good casual games could be, until I sat down with five strangers and ripped through three games in a row of this wonderful game.
Old Game of the Year 2011: Merchants & Marauders
New Game of the Year 2011: King of Tokyo

2012: My view of the hobby increased substantially in 2012 as I began to pull down some review copies. My original champion was a two-headed Fantasy Flight/Stronghold reprint of Merchant of Venus. I actually feel pretty good about that still, since I find it to be criminally underrated, both as a reprint of the classic game and a reinterpretation by FFG. I played it this weekend in fact, and still had a wonderful time. This was also the year of Clash of Cultures, which, despite its complexity and length, was well-loved by almost everyone with whom I played it. But with some distance my favorite from 2012 is now the reprint of Tom Jolly’s Wiz-War. I gave it a good notice at the time, but reintituting the original rules and getting some expansions pushed it over the top for me. I now consider it one of my favorite games. I can say the same about Merchant of Venus, but Wiz-War has ended up being even better.
Old Game of the Year 2012: Merchant of Venus
New Game of the Year 2012: Wiz-War

2013: I’ve read in many places that it would be nice if columnists could have the luxury of giving maybe six months before naming their game of the year. That would indeed by nice, but I’m not sure 2013 would have ended any differently for me. My original champ was Duel of Ages II, and I still love it. If anything, my love for it has only grown now that I’ve become better and explaining it and conveying up front what kind of experience it is before getting started. The difficulty is the game that I originally slotted at number three: Robinson Crusoe. At the time I was just a little worried it would prove it would lack replayability, but that hasn’t ended up being a problem at all. I gave it a glowing review at the time, and I actually think I underrated it. Still, Duel of Ages II is a singular experience for me. In a sense it redefined the “epic” game model for me and proved you could do something sprawling and ridiculous, without the design suffocating under its own weight. It’s close, but I think I made the right call.
Old and New Game of the Year 2013: Duel of Ages II