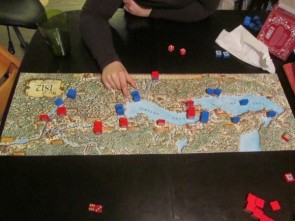 What makes a block wargame and how to start blocking

A couple weeks ago, I asked the question: What makes a wargame?, which was probably too broad to generate an easy response. So I thought I'd narrow the focus a little bit and talk about a specific category of wargames that has been consistently popular for the last couple decades: block wargames.

Block wargames use wooden blocks to denote different units. These blocks have stats on them similar to hex-and-counter games (attack power, movement rate, etc.) that are normally only visible to the controlling player. This is how block games implement a fairly unusual aspect for wargames as a whole: the fog of war. Unlike Avalon Hill classics or Twilight Imperium, you can't always know for certain just what you're getting into when you decide to lead the offensive into your opponent's town. You know your opponent has a tank regiment out there somewhere, but you're not exactly sure where. That town could be filled with the same units you fought earlier, but it could be reinforcements that cycled in and out of the town, presenting you with a whole different challenge.

The one thing you'll always know for sure is what kind of battle you'll be fighting. Most block games are based around historical scenarios; typically somewhere between a single campaign to an entire war. Columbia Games' Shenandoah: Jackson's Valley Campaign covers the almost two months that Thomas "Stonewall" Jackson ran up and down the Shenandoah Valley with his "foot cavalry" during the American Civil War, while Columbia's Hammer of the Scots roughly covers the first War of Scottish Independence (think Braveheart), which lasted 32 years.

In order to emulate both the kind of warfare taking place and the length of time that the campaign/war lasted, all of them will have different rules about things like movement (Columbia's Crusader Rex only allows so many units to use the roads each round, since they were often little more than dirt paths) and reinforcement. The latter can range from bringing in fresh recruits once they've aged enough to hold a sword, like in Hammer of the Scots, to determining which daimyo will have been influenced by what happens on the field, as in GMT's Sekigahara: The Unification of Japan, and will then be willing to join the fight. Most will also have rules about command influence. Unlike many wargames, where you can easily command all of your forces from worlds or star systems away, in most block games you'll be limited by the communication methods of the day, which often weren't great. That means you'll often have to pick and choose which armies will participate and which will have to sit and wait for orders.

Most block wargames are card-driven in some respect. This can range from the extremely simple system of Columbia's Rommel in the Desert, which has symbols for turn actions and blank "dummy" cards, to the more elaborate approach of GMT's Hellenes: Campaigns of the Peloponnesian War, in which every card represents a leader or event that directly affects the game state. Many also take a mixed approach of the two, where cards can be used to move units or to create an event for that turn and each player has to decide what's more valuable at any given moment. Combat will almost always include dice of some kind, so be aware of the variables of war in that way, too.

If you are interested in getting into block games, the first thing to know up front is that they're almost all 2-player games, so they won't be something you'll bring out for a group. There are a couple out there that are nominally 2-3 players, like GMT's Europe Engulfed and Columbia's Napoleon: The Waterloo Campaign, 1815, but these are usually best with 2 players, as well. The other thing to note is that playing time can vary pretty widely. Like most detail-intensive wargames, it is possible for things to slow down while players consider their options. Since block games have the "fog of war" effect, trying to plan multiple turns in advance, as you'd do with chess or games where you have maximum information, will often be more difficult. You'll often want to draw back your thinking from strategic to tactical, based on what's happening in that round. Once you're familiar with the rules, you should be able to finish most in two to three hours.

As you'll note from the games I've mentioned, the two leaders in the block wargame field are Columbia and GMT. A great starting point for anyone new to the genre would be either Columbia's Richard III: The Wars of the Roses or GMT's Sekigahara. Both have easy to learn rules that will let you get into the game with a minimum of reading/explanation. Once you've played a couple games of one of those and decided you like the style, you can venture into something more complex, like Hellenes or Crusader Rex or Columbia's EastFront II. Of those that I've played, it's hard to beat the original of the genre, Rommel in the Desert (published 1982), but I'm more of a fan of ancient to medieval warfare, so I'd have to list Crusader Rex and Hellenes as my two favorites; the former for the change in strategy that both sides have to make when the Crusaders finally arrive and the latter for its expansive detail of the long fight between Sparta and Athens.

But I'd recommend any of those mentioned above, as I've never had a bad game with any of them. If you're into wargaming of any kind, it's well worth taking a couple hours to play with blocks again, just like when you were a kid.

Marc Reichardt
Associate Writer
There Will Be Games

Sevej replied the topic: #276344 27 Jun 2018 10:46
Strangely, the thing I really like from my first block wargame was the limit on how many units can cross a border (instead of the simple but brilliant fog of war). This made me organize attacks from multiple regions and this somewhat reminds me of epic movies in which a battle have armies coming from multiple regions.

Also, I like the dynamic on the cards. The going first with few OP or later with more OP thingy is definitely a choice (instead of random, since you have to read your opponent) and makes for interesting decisions.

Gary Sax replied the topic: #276349 27 Jun 2018 11:05
Similar to Sevej, the thing I like about block wargames is incidental to the fog of war. Since the pieces are so large for each unit, these games tend to fall into a scale that I really like. You can't do an OCS size game with hundreds of units in block form... or you can but it would be cramped and difficult.

Gary Sax replied the topic: #276352 27 Jun 2018 11:13
Oh, also, to add to but not overlap with this excellent introduction---people often think of a certain style of game, the Columbia block style, when they think about these games. But this style is *very* flexible. You can do 3 player games (Triumph and Tragedy), blocks are great for naval games (Seas of Glory and PQ17), block *and* traditional hex and counter games that combine the two (Fast Action Battle series from GMT), loads of other stuff... a frequent feature of more unusual types of block games is that they'll often have phantom or fake blocks to enhance the fog of war.

But I've played a few like wizard Kings and sekigahara. I wish sekigahara was around during my beginning, because not only is it a truly great game, but a maybe one of the best beginner games for blocks. Just magnificent.

A) Block games in the traditional sense (that include Fog Of War) can be something of a non-starter if you plan on gaming solo. Meaning so much of the meaningful decisions in the game are wrapped up in Fog Of War effects that omitting them basically leaves you with an unsatisfying gimped version of a hex-and-counter wargame. Just a fair warning to anyone expecting a rewarding "play both sides" experience. YMMV.

With the rise of GMT's Commands & Colors games, it's funny to talk to people who say "I love block games!" but they actually love C&C Ancients, or C&C Napoleonics, or the recent C&C Tricorne. It's interesting to note how times change, and how the hobby language changes with it. That being said...

C) I feel like Columbia's block games library is too stale for modern tastes. Realizing that grognards are typically very attached to games they've played since childhood (or for simply a long time) I wonder if the latest generation of Kickstarter minis gamers would ever give a game like Hammer Of The Scots a second look. Or to put it another way: I have no idea how Columbia sells Wizard Kings to anyone under the age of 30. I guess this also gets to a more fundamental question of how some of these "legacy" publishers (no, not Pandemic Legacy, I mean old publishers!) plan to compete with the more modern throw-buckets-of-plastic-minis-at-them approach.

Josh Look replied the topic: #276405 27 Jun 2018 16:11
I wish there were more block games that interested me. I really like the idea of them, and I’ve even enjoyed playing a couple, but I need that level of immersion and escapism, and historical stuff doesn’t do it for me in the least. I’m aware of Wizard Kings but it seems little too old fashioned for my tastes. If I’m wrong or if there are other block games without historical (alt history doesn’t do much for me either) themes, please let me know.
Read More...