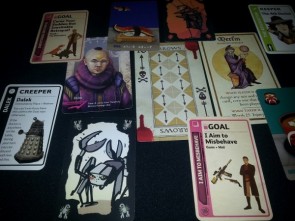 Game Name
There Will Be Games
When you have a family of six, as I do, getting everyone on the same page or interested in gaming on the same night is a rarity. When the stars do align, the number of interested or attending members can vary, along with how long they will be engaged in actually playing. Card games have virtually zero set-up time, don't require a huge time commitment and can accommodate a flexible number of players. The following card games are the ones that consistently provide the best experience for my family.

“I'm The Duke.” Okay, starting a recommendation with a reference that only someone who has played the game is going to “get” is bad form. But anyone who has played Coup just rolled their eyes, smiled and shook their head. Coup is a card game with an economy. How much you can take from the treasury each turn is based on the cards you have. If you hold “The Duke” you can claim the most (3 coins) from the treasury. But Coup isn't just a game about what cards you hold (you only have two cards) but what cards you SAY you hold. Because you can claim to have ANY card and, unless someone calls you out on it, you can reap that reward. So, it's not unusual for everyone to claim “I'm The Duke” in the opening round, simply because there isn't enough information out to prove otherwise. As I said, you can call any other player out for pretending to have a card. But, if you are wrong, you lose one of YOUR two cards. Lose both cards and you are out of the game.

The economy drives every decision. Collect 7 coins and you can “Coup” any opponent's card, which an unblockable move. The card is removed from the player's hand and placed face-up on the table. This gives everyone a bit of information about what cards are possibly still in the game, as there are only a total of 3 of each card in the deck. Add in cards like the Assassin, which can remove another players card for only 3 coins and the Contessa who can block an assassination attempt and the tension is delicious. The more face up cards that are revealed by either coup, assassination, or failed attempts at calling someone out, the more information you have to determine if another player is trying to deceive you.

Yes, Coup has player elimination but with the game going so quickly, you are never out of the action for long. You can add more players (up to 10 players) with the expansion Reformation. It also adds more roles and a faction system. I've personally had trouble getting the expansion added in because the base game is so.damn.good. That no one actually wants to change the dynamic of the game by adding anything. The only issue I have ever had with playing Coup is with player's who don't feel comfortable “lying” which brings us to...

There are no winners in Cockroach Poker, only one loser. No player elimination, the cards you are dealt have almost zero impact on your chance of winning and you will spend most of the game simply passing a card to another player. It sounds like a recipe for game night disaster but, instead, you'll find multi-player mayhem of the highest quality.

In your hand you'll find a variety of ugly critters Rats, Bats, Cockroaches, Stinkbugs, Scorpions, Spiders, Frogs and Flies. You pick a card and pass it to another player stating what it is “It's a Cockroach” That player then chooses to either a.) Decide if you are lying or telling the truth by stating “I think it is a cockroach” or “I don't think it is a Cockroach.” They reveal the card and, if they guessed correctly, they put the card in front of the player who passed it to them. If they guessed incorrectly, the card goes in front of them. Get four of any one type of critter in front of you and you lose. Your b.) option is to simply say “I pass” and then glance at the card, pass it to another player who has not seen it yet and state “It is a...(fill in the blank)” As simple and silly as it sounds, imagine sitting at the table with 5 other players, each one glancing at the card, then passing it to another player. Imagine they ALL say “It's a Cockroach.” And then it comes to you, the final player (with no one else to pass to). Were they ALL lying? Were they all telling the truth? Did they plan this whole facade because you already have three cockroaches sitting in front of you and if you get ONE more, you are THE loser?

If you are going to pick up Cockroach Poker, do yourself a favor and pick up the Royals version. This has all the base cards for “normal” Cockroach Poker with, what is essentially, the Royal expansion. Simply remove the extra royal cards for typical play and add them back in when you want another level of deception and strategy. Protip: If someone passes you a card and says it's a Ladybug, they are lying. There are no ladybugs in the deck...but it doesn't make it any less hilarious.

Ah, Sushi Go. The game that has become synonymous with the pick one and pass hand drafting mechanism. And while “basic” Sushi Go is fantastic, it is limited to 5 players. Sushi Go Party supports up to 8 players and adds a whole new menu of items to this set collection card game. It takes a bit more time to set-up but it's an even swap with the additional player support, physical scoring track and sheer variety of different sets to collect (All with different goals governing them).

Tournament at Camelot (3 to 6 players)

A trick taking game that comes with asymmetrical powers and mitigates the luck of the draw with a thematic double tiered catch-up system all while framing it around a melee to the death. It's not only a mouthful, it can be a handful. Like a skillful juggler, Tournament at Camelot has a lot of plates in the air and, sometimes, it can break a few plates due to it's over ambitiousness. It is not that it is too complex, it is that the flow can be broken as more and more rule bending/breaking powers come into play. It features a Feint system that strategically pushes “tied” cards out of a match that can be used to focus your assaults on a player of your choice...assuming it doesn't backfire. Godsend cards and special companion powers that trigger as your hit points become low are the aforementioned catch-up mechanisms. When you put it all together, it provides an experience that makes you forget you are playing a trick taking game and not actually engaged in a Tournament of Arthurian proportions.

Pick your geeky poison and Fluxx probably has you covered. Coconuts and King Arthur? Monty Python Fluxx. Browncoats and Bounty Hunters? Firefly Fluxx. Spock and Space? Star Trek Fluxx. Time Travel and Companions? Doctor Who Fluxx. All built around a game where everything is constantly in flux...including the goals and the rules. When you lose, you swear the game is totally random and strategy counts for naught. When you win, you swear you had been setting up that win for rounds. Either way, it consistently makes you want to play “one more round.”

With all of these titles, “The more, the merrier” is the rule of thumb. The quick, engaging gameplay of all these titles make them excellent choices for a family game night or simply a game to play when you have some free time.

Legomancer wrote: I don't know why you'd put Coup in if you also have Cockroach Poker.

Great question. Coup was one of the games I first played with my kids years go when it came out. It remains one of my youngest sons (15) favorite games and if I pull it out, he will almost always sit down to play it. If he has friends over and wants to gateway them into playing one of "Dad's Board games" he will always reach for this. I still love it and it almost always gets a positive reaction from everyone when we play it.

Cockroach Poker is easier. Super easy. I can't bring out Coup and play it with my 5 year old niece but I can do that with Cockroach Poker. And the scary part is she's GOOD at it...like really good. On a more personal note, my oldest son is Autistic. He loves animals and insects. He can wrap his head around Cockroach Poker more easily than Coup and the theme of bugs is one of the main reason I bought this (with him in mind) to begin with.

So, in the grand scheme of Family Card games (or, more specifically, MY family and card games) both have a place on the shelf. And both have stood the test of time. In the same way that a Top list of my favorite games would likely include Kemet, Inis and Cyclades, even if they look the same at a glance, they all have their own niche.
Read More...