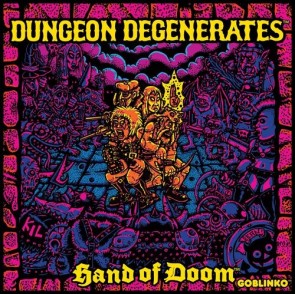 Board Games 4358
We can't stop here. This is bat country.
April 20, 2019
Rating
4.0
Some context. I'm not a Kickstarter backer, so no, my voice isn't of one who tasted the kool aid. I was a skeptic & got the game at retail. I've played a lot of adventure games and this one has been a singular experience.

For anyone who plays adventure games and wants a system that tells uniquely gonzo & evocative stories rather than the usual generic fantasy stuff, this game is a total treat. The art style is fantastic, the combat system has just enough depth to provide some fun decision making during a fight but streamlined enough to not get too bogged down in round-by-round minutiae, and the chain of missions that you play during a campaign (usually of 3-4 games) offers some satisfying branching that will let you play the game in surprisingly different ways at times. It's actually difficult to review in *too* much detail without spoiling some of the things that can happen.

The rulebook is pretty well laid out but does require a few revisits as you play for the first time, partly because the game is fairly unique in how it implements some of its systems, namely the combat, which condenses attack hits & misses, defense hits & misses, offensive damage and defensive absorption, into a single roll of 5 (sometimes 6) color-coded dice. Between combat you'll be flipping encounter/event cards, decreasing danger levels Pandemic-style to prevent locations from tilting beyond danger level 6 which causes a Doom timer to increase (& other bad things to happen), leveling up towns to give you more cards to buy in them, using your XP to buy skills & abilities from a generous selection that's always available whether you're in town or not, and generally chasing down whatever objective is laid out for your current mission, though you're usually given a few ways to do it or several different objectives to choose from.

Even the first mission gives you several different choices as the jailer offers to let you out if you'll do him a favor and deliver a sensitive "package" to a friend of his. You can turn him down & fight him, then proceed with the "Loot & Pillage" mission which involves what you think it would, or take him up on his offer and go retrieve what turns out to be a Soothsayer's Head. Yep, a severed head, and it's infected. And even if you do choose to go pick this thing up, you can choose to not deliver it to the jailer's colleague at all (which would award you a good amount of gold) but take it to the place where the head itself is begging you to go, if one of your players is MAG(ic) 7 or a Puritan and can understand what the head is saying. Or you can drop it off with some village elders, who'll task you to do something else with it. If you do decide to pick this thing up, you'll have a 50/50 chance of getting infected. This infection will also direct your choices at the end of the mission, since the affected party member will begin to hear the siren call of his/her new master in the Mountains of Madness... which incidentally will only be accessible to you if you have a status effect (fatigued, poisoned, blessed, exalted, any other f'ed up state) because it's a "metaphysical" space. Not status effect...ed? You'll need to score some drugs in the next mission before trying to enter. From there you can kill or follow this master and... either option carries some cool rewards & outcomes so I'll stop spoiling it. :P

So the "adventure" side of this thing carries some serious flavor and variety. The characters also play very differently, ranging from your more typical magey/witchy peoples, to a kid who can dish out crazy amounts of damage in Lycanthrope form at the cost of gradually damaging herself, to a "witch smeller" who brandishes a gun with swappable ammo types and can, depending on her skill loadout, intimidate Heretic enemies or be immune to the Ambush effect if the enemies are witches/heretics, or can brand them with an iron and remove their special abilities, etc, etc, etc.

And while the butterfly effects of decisions in this game can lead to some entertaining & convoluted outcomes, the decisions themselves often aren't too complex & usually pretty binary. It's often a decision between traveling boldly or cautiously, fighting in an assault or guarded stance (which makes the 5 dice mean different things), choosing who gets a kill, whether or not to fast travel, whether or not to rest (and skillup). These are wrapped in so many paths & outcomes, customizable skills, & lots & lots of combat, that their repercussions become more complex & rich over time as your mission evolves and your characters gain more abilities and effects from various loot & consumables.

Speaking of consumables... these offer decisions as well and eshew the tired "health potion" trope. There are purchasable skills such as Gourmet which allow you to eat your kills. If you can keep it down with a CON(stitution) test, you'll get some healing, otherwise you might get some side effects from stuff like goblin flesh. Conversely, there are also food items such as the Luncheon Truncheon which can be eaten as a sausage or wielded as a pretty damned effective weapon or as bait ;)

Overall, I was stunned by how rich, varied, and evocative this game is. It's certainly not for everyone, in the tenor of its adventures, its art style, its sometimes archaic skill check system, RNG events, and so forth. It's also super combat-heavy, with combat encounters happening nearly every turn unless you're sitting in a town or luck out during the danger card flip. But the creators of this thing clearly put a lot of (oftentimes brilliant) design into its mechanisms and gameplay, which I honestly was not expecting until I decided to check it out for myself. I get a real sense of a living, breathing, intricately weird world when playing this, and I haven't experienced that with any other adventure system.

So... if you're an adventure game fan (things like Talisman, Runebound, or the Arkham/Eldritch horror games), take a close look at this one & lurk its forums. It's not getting a ton of buzz because it's independently published and this game's approach to the genre is a bit unique but I'm personally glad that I stumbled across it. Definite keeper for me, to the point where I will probably start getting rid of some of my other adventure games. They are no longer in the same league.
F
Frohike Top 50 Reviewer 7 reviews
Was this review helpful to you? 6 0