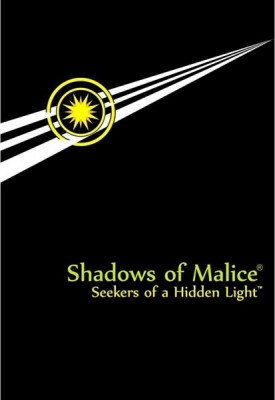 Board Games 1555
Towards Better Fantasy in Board Games
April 26, 2019
Rating
5.0
Shadows of Malice effects a bold and evocative fantasy adventure framework, showing design choices that I (perhaps vainly) hope will be carried forward in future games in this genre. It has some lessons to teach which deserve attention in the growing representational fantasy juggernaut of giant miniatures, overwrought lore & event text, license tie-ins, and exclusive Kickstarter content franchises.

The nuts and bolts of this system don't seem revelatory at first glance, albeit refreshingly straightforward. It provides a versatile d6-based roll modification system (using some satisfyingly chunky and colorful acrylic "crystals" to trade, expend, and harvest) for chance-driven elements ranging from movement and combat results to skill procs, in combination with some card draws for battle loot and other item acquisitions and the occasional effects of "fate". All of this is draped with just enough narrative cohesion onto an archetypal struggle of light versus dark beings which carries a few, thankfully subdued elements of game lore.

After the first few beats of the game, though, it becomes clear that there's a refreshing efficiency to this framework, combined with a respectful amount of restraint and remove; a lack of contrivance where it was apparently never needed. This noticeably cuts through a rule fog that tends to creep between the player and the game world in more baroque designs such as Mage Knight, while the thematic openness allows the player to more fully invest themselves in the game and inhabit the experience rather than spectate fantasy cliches.

The culminating feel can be summed up as less filler, more space. This certainly feels revelatory in a fantasy adventure board game: that the player can be trusted to take their cues and build an experience, rather than flipping a card, reading some mandated text on a card full of Tolkien orcs, and shoving a Cthulhu or Star Wars model around a map. The game certainly provides props toward the experience, but these are more considered and less obtrusive: from the clean, minimal box cover, to the maps which take cues from the front or back pages of old fantasy novels, the clean symbology, and the crystals that refract the light on your game table and tie into the theme of the game in such a simple but aesthetically effective way.

For me, the way in which Shadows of Malice distinguishes itself shows an element of maturity and confidence that I don't often encounter in this genre. It respectfully leaves the staging of its narrative and actors -- as well as their visual illustrations -- to the player's own imagination, which makes for a much more immersive and personally fulfilling experience. The monster generation system is a prominent example of this design choice, where the player rolls to determine monster type (partly based on terrain), combat power, and special abilities. The image of the creature thus created is left entirely to the player's imagination, which can be fascinating and memorably bizarre, provided that you refrain from falling back on your own tired Tolkien visual tropes.

This is one of the few games where encountering a dragon or a Nazgul oddly feels disappointing because it seems like the result of a failure of your own imagination. There are much more interesting battles to be fought here.

I risk overstating the openness of this system, however. There is definitely a designated flow and goal to the game. This isn't a sandbox or a mere collection of tools for a fantasy crawl. The rules are clear, and the goal of your avatars is always to gain the strength they need to unlock certain locations, Light Wells, while the strength and number of shadow beings grows through a quasi-AI system to seek out these wells and trigger their own end game: the ultimate incarnation of a dark being named Xulthul. If you are beaten to the punch, you're in for a difficult battle, fueled by tough odds and a hopefully grandiose imagination to match.

The heavily luck-based systems may become off-putting for some who would perhaps rather fall back on more stable, incremental, deck building systems or rules puzzles to allow them to hone and craft the most efficient series of actions for their turns. There can be some measure of satisfaction and control gained from this, but at a cost that Shadows of Malice doesn't really care to pay. The filter between player and game world would become less raw and immediate, the "gameable" elements becoming a means detached from the ends, something this spectrum of board games has always struggled with. I don't believe this game is designed with that mindset. Instead, it targets those who can comfortably bridge the managed chaos of the dice with the significance of unfolding events in the game world. It's a weird, liminal form of roleplaying and fatalism that should be familiar to a distinct audience.

For anyone who remembers those harrowing encounters in D&D, where you feel like you're throwing every possible roll modification at a fight to surmount an increasingly desperate, evil dice-fest that seems to be driven by some sort of dark magic against your favor... and finally pulling through, limping away hemorrhaging with every status effect you can think of, understanding that your struggle with the dice was modeling a ridiculous bloodbath of a battle (or a comedy of errors), welcome back. It's good to be home, isn't it?

In all of these respects, Shadows of Malice exemplifies how to do fantasy better in board games. It understands and respects the heart of the genre and gives us some wonderful adventures in the process. What more can we ask for?
F
Frohike Top 50 Reviewer 7 reviews
Was this review helpful to you? 0 0