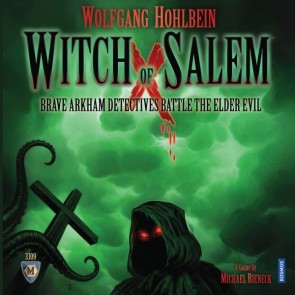 Witch of Salem is a cooperative game, based on a series of novels by German author Wolfgang Hohlbein (which themselves were inspired by H.P. Lovecraft), is set in early 20th century New England. Players work together to close portals which are allowing the terrible "Great Old Ones" access to our world. Witch of Salem is for 2 to 4 players, ages 12 and up. It takes about 60 to 90 minutes per game.