Chaos in the Old World 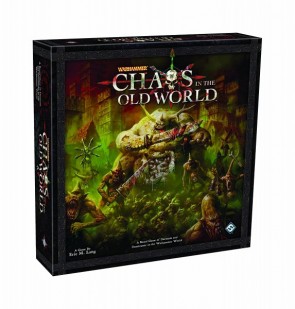 In the Warhammer world, four Gods of Chaos battle for supremacy. Khorne, the Blood God, the Skulltaker, lusts for death and battle. Nurgle, the Plaguelord, the Father of Corruption, luxuriates in filth and disease.Tzeentch, the Changer of Ways, the Great Conspirator, plots the fate of the universe. Slaanesh, the Prince of Pleasure and Pain, the Lord of Temptations, lures even the most steadfast to his six deadly seductions.

In the Chaos in the Old World board game, each player takes the role of one of the malevolent Lords of Chaos. Each god’s distinctive powers and legion of followers give the controlling player unique strengths and heretical abilities with which to corrupt and enslave the Old World. Yet, as the powers of Chaos seek domination by corruption and conquest, they must vie not only against each other, but also against the desperate denizens of the Old World who fight to banish the gods back to the maelstrom of the Realm of Chaos…for now.

April 02, 2020
Rating
4.0
Very good indeed, with a fantastic balance of strategy and (appropriately enough) chaos. It's fairly (not completely) balanced but has such huge asymmetry in the player powers that this is actually a fairly impressive achievement. It's a highly procedural game that has to be followed to the letter, which is kind of a bind, but it's difficult, exciting, competitive and tense and the theme sucks you in to the point where it can feel marginally uncomfortable when you start ruining regions.
MT
Matt Thrower #1 Reviewer 286 reviews
Comments (0) |

UPDATE: After four "learning" games—separated by enough time to make the rules hazy, and with different players at each session—it's clear to me that this is only going to shine with complete knowledge of the various powers, and especially the contents of their decks.

On the one hand this suggests a huge amount of replay value—it would take at least four plays (once as each power) just to get to the starting point of deeper understanding—but in reality it's going to be difficult to string together connected plays with the same people in a culture where very few are interested in wearing a game out.