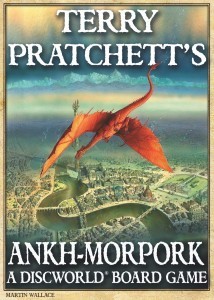 Treefrogs's Essen 2011 release will be Ankh-Morpork, a game set inthe largest city on Discworld, as created by the mind of Sir Terry Pratchett.

Lord Vetinari is dead, either that or he’s on holiday. While the cat is away the mice come out to play – you being one of the mice. You will be given a secret personality which will tell you what you need to do to win the game. Each player has a set of minions to do their dirty work and some building pieces. If you are one of the three lords then you must control a certain number of areas (the number depending on how many players are in the game). If you are Vetinari (having secretly returned to the city) then you must have minions placed in nine different areas. If you are Chrysophrase the troll then you must accumulate $50 in wealth, which includes the value of buildings on the board. If you are Dragon King of Arms then you want to cause enough trouble to lead the city to welcome back the rightful king. Finally, if you are Sam Vimes then you want to stop any other player winning by the time the deck of cards run out.

Game play is simple, you play a card and do what it says on it. Cards represent characters and buildings from the books, with each one being designed carefully to reflect the nature of the original character/building. Thus, if you play CMOT Dibbler then you may make money or lose it, depending on the roll of the die. Detritus would let you sort out trouble in the city, while playing a wizard would lead to the drawing of a random event card. This being Ankh-Morpork there are no good random events, just gradations of bad. There are also many assasins to allow you remove other players’ minions.

Rating
4.0
Already have an account? Log in now or Create an account
April 25, 2019
Rating
4.0
Like the box says, play a card, do what it says, that's it. The mechanisms for adjusting the pieces on the board are smooth and the thematic touches if you know the source material are fun. Some of the secret objectives are maybe a little out of whack, but these can be adjusted easily enough.
M
mc Top 50 Reviewer 12 reviews
Comments (0) | Was this review helpful to you? 0 0
Discuss this article
Log in to comment
Posts in discussion: Discworld: Ankh-Morpork