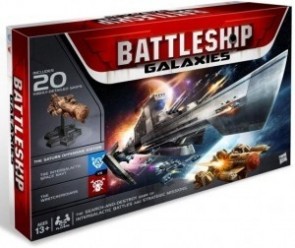 Hunt. Destroy. Win. Outsmart and outmaneuver your enemy with courage, instinct and strategy as the theater of battle launches into the vast reaches of space. The Saturn Offensive When Saturn’s mining settlement is attacked by warmongering aliens known as The Wretcheridians, the newly-commissioned First Fleet of the Intergalactic Space Navy races back from the edges of the solar system to mount a fierce defense against the invaders.

Outgunned and outnumbered, the brave young ISN officers strategically drive the battle deep into the rings of Saturn to begin a deadly game of seek and destroy. Command the ISN fleet and defend the settlement. Or lead the attack as the commander of the ruthless Wretcheridian invaders.”

Will you help save Saturn, or lead it to its doom?