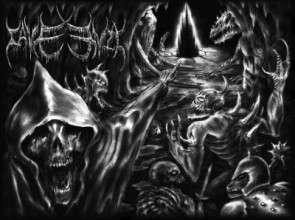 A game of Subterranean Necromancer Warfare

Each player assumes the position of a powerful Undead Ancient Lich who, utilizing an army of Hired Dungeon Denizens, Constructed Undead Atrocities, and Summoned Hellish Demons, vies to conquer all other Necromancers, or win the accolade of the Eternal Evil Emperor, who supplies all the Necromancers' darkest powers.

Each wizard, having crawled out of their own rotting necropolis, have set up their Lairs near The Pit, the source of Infinite Shadow. The players must invoke minions conjured from ancient shadow wisdom utilizing precious resources of Metals, Gore or Shadow Flame.

On a turn, a player has the opportunity to conjure knowledge and resources. With this forbidden knowledge and wealth he/she may invoke and control Squads of minions to do his/her bidding. Each Squad may conduct one action during a player's turn. Actions can very from digging further tunnels, to combat, to subduing creatures wandering the cavern tunnels and exploring the depths.

Only a single player can be powerful enough to harness the power of The Pit. The game can be won when only one remaining Necromancer stands. A Necromancer can be destroyed either in combat, or an enemy may venture into their Lair and crush the wizard's life source, a Chthonic Crystal. It is a game of elimination, BUT an even greater darkness may befall the players. As players invoke creatures and conduct turns the The Pit absorbs the darkness and may awaken thee ultimate Cave Evil. Can a Necromancer’s legion be strong or wise enough to defeat such evil and win the game? Game Play Details: The game is a dark fantasy, war, adventure set in a world where all characters are horrifying. If you enjoy fantasy, war, or adventure games you may want to look at it. It uses a squad making mechanic in which a player can control and create a variety of creature squads. Players also create and manage resources, explore and dig into further caverns, and pick up and deliver important items. A crucial element for victory would also be clever tactical excavation, moving, and superior hand management. While games can involve violent combat, players may also be patient and cunning, building their minions slowly There's much power to find just exploring the cave system itself.

The game has over 300 different cards. Each card has a separate artwork. Over 120 different types of creatures, over 80 items and spells, over 40 excavating path tiles, and much much more. Limited edition of 500 copies.