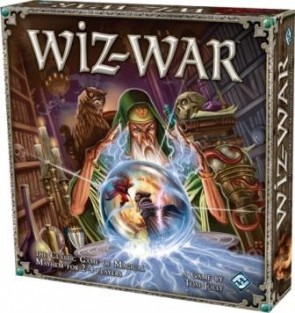 Wizards wage no-spells-barred magical duels deep in an underground labyrinth in Wiz-War. This classic board game of magical mayhem for 2-4 players pits players’ wizards against each other in a stupendous struggle for magical mastery. Win by stealing other wizards’ treasures and hauling them back to your base, or just score points by blasting the other wizards. The last wizard standing always wins.

Created by Tom Jolly in 1983, Wiz-War has delighted players for decades with its light tone and fast, imaginative play. Now Fantasy Flight Games brings Wiz-War back, better than ever!

Staying true to the spirit of the game that has entertained players for years, as well inspiring an entire genre of games, Wiz-War caters to the imagination and the funny bone. Casting an enriched array of spells, your wizards race through an underground maze, avoiding fireballs, werewolves, and psychic storms. Subtle game enhancements by Kevin Wilson and Tom Jolly promote faster play and clarify card effects.

5 stars
(3)
4 stars
(0)
3 stars
(2)
2 stars
(0)
1 star
(0)
Rating
4.1
Already have an account? Log in now or Create an account
Something's do get better with age
April 18, 2019
Rating
5.0
This is my absolute favorite game. The rulebook really lays out how the game plays so much better than the classic versions did, so Kevin Wilson should be lauded for that effort.

Although the caveat to its greatness is that you have to play the game fairly consistently to get the most out of it, ideally with a regular group of players that meet up at least once a month, for example. This could be said of most games, of course. Though this applies to Wiz-War more than most.

I have to admit that there is a bit of a wall that new players have to climb before they can truly appreciate the brilliance of Wiz-War.
That barrier includes:
* Internalizing the cards enough so that a player can quickly formulate a tactic and play it.
* Understanding the general foundation of interactions laid out by the design, and the terminology used to describe them. The rulebook does a fine job of this, but a player needs a couple games alongside the rules to get the most out of them. The player aides made by Universal Head go a long way to help jump in as quickly as possible.
* Being creative enough to tweak your tactics on the fly and react to the constantly changing board state.

These caveats are similar to what you would find in Magic the Gathering, and is the main reason why M:tG players are usually the best options to recruit from, to play and enjoy Wiz-War.

Wiz-War isn't the 'lifestyle' game that M:tG is, but it does demand much more from its players than the 'light beer and pretzels experience' it is often portrayed to be. That description is misleading and ultimately incorrect. This is a solid mid weight (leaning towards light) experience.
C
Colorcrayons Top 50 Reviewer 10 reviews
Comments (0) | Was this review helpful to you? 0 0
April 25, 2019
Rating
5.0
This is pretty emblematic of why I play games. It's a ridiculous romp in which you create amusing stories through clever cardplay. It creates arguments about the laws of physics inside a multidimensional labyrinth that kind of folds in on itself. As a result of this house rules are more or less REQUIRED. A bout lasts about half an hour maybe, I don't know, time is flying, I don't care, rack it up again.
M
mc Top 50 Reviewer 12 reviews
Comments (0) | Was this review helpful to you? 0 0
One of the Greats
April 19, 2019
Rating
4.5
Wiz-War is divisive. It's a triumph, but if you play with the wrong people, or perhaps with a less than ideal deck configuration, it can stagnate. You also want at least 3 players, ideally 4 or 5. My suggestion is to throw out most of the "counter spell" cards; they are boring and effectively cancel turns and artificially prolong the game.

Zombies!!!
4.0
S Sagrilarus
"Doesn't take itself too seriously, rules are quick and easy..."